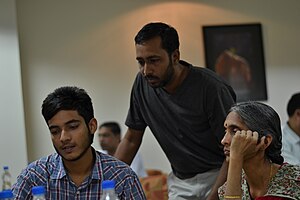 In June of 2014, the Wikimedia blog reported the end of a month-long Umepedia Challenge which aimed to create Wikipedia articles on the Swedish city of Umeå in as many languages as possible. If somebody were to take a wild guess, they could make the assumption that the contributing winner would hail from Europe since the contest pertains to a European city. But surprisingly, the winner is Satdeep Gill, a contributor for Punjabi Wikipedia. He proudly claimed in his Facebook post: “I won the Umepedia Challenge by creating all the articles in Punjabi and a few of them in Hindi and Urdu.” This is the zeal and enthusiasm of Punjabi Wikipedia admin Satdeep. His efforts to advance and maintain the Punjabi Wikipedia are equally shared by co-admin Vigyani as seen in the latter’s inquiries and application of the editing norms of other Indian language Wikipedias on Punjabi Wikipedia. One of Vigyani’s recent initiatives is a query regarding translating and transliterating foreign words on the Hindi Wikipedia Village Pump.

Intrigued by the keenness of the two sysops and the increase in the number of contributors on Punjabi Wikipedia, I decided to get more information from Punjabi Wikipedians by way of a 20-point questionnaire. I got responses from five leading Punjabi Wikipedians. A common factor I noticed from the responses is that they all were introduced to Punjabi Wikipedia out of curiosity when they noticed the interwiki link provided by Wikidata on the left-hand side of the screen of many English articles. A motivating factor of these editors was reflected in the words of Babandeep Singh: “Seeing how the wiki was lagging with respect to the quantity and quality of articles, I decided to contribute as much as I could.” It was also revealed in the survey that Patiala has the highest number of active editors, with at least three known contributors hailing from the city. The main facilitating factors in attracting and retaining new editors here has been the satisfactory language interface and the editing tools. Although the size of the current Punjabi Wikipedia Community is relatively small, according to Parveer Singh Grewal, the atmosphere here is good and there is very little room for conflict. 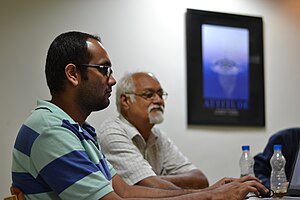 According to Charan Gill, while Punjabi Wikipedia has a number of stubs that don’t go beyond a one-line description, many are in the process of being reworked into full-length articles. The respondents generally felt that a neutral point of view is being observed. With regards to the future growth of Punjabi Wikipedia, Vigyani points out: “I recently created many articles using AWB and data lists in form of CSV files on topics of geography and politics. Articles related to politics were already being done on Hindi Wikipedia. I borrowed their data. I then created my own data sheets for geography articles, which were also provided by Hindi Wikipedia. This kind of collaboration can be done across all the other language projects, especially among Indian languages. A huge number of stub/start class articles can be created by recording the data in excel sheets and using bot or AWB. A large part of data is numeric and rest text. By easily translating those text portions, data lists for each local language can be created, resulting in a huge number of articles on important topics.” On the other hand, Satdeep Gill plans to promote Wikipedia in government schools of Punjab. According to him, even a single editor from one school will make a huge difference to the Punjabi Wikipedia. It was also acknowledged that Punjabi Wiktionary and Wikibooks are short of contributors. These projects can reach a commendable level contributions only after enlisting more users from Punjabi Wikimedia into these projects.
It is widely known that Punjabi is written in Gurmukhi script in India while a Persian-style Shahmukhi script is used in Pakistan. Most Punjabi people of these countries speak the same language but are aware of only one predominantly used script in their country. Even in the midst of of this divide, there are a few Wikipedians who contribute to Wikipedia in both the scripts. One such contributor is Abbas Dhothar from Pakistan. Even when he is active on the Shahmukhi script version of Punjabi Wikipedia, called “Western Punjabi Wikipedia,” he contributes to a cultural integration of Punjabi Wikipedians by creating and expanding articles on notable personalities such as Maharaja Ranjit Singh. He has listed links to the website of the Indian Punjabi weekly newspaper Ajit and the global Punjabi unity website Sanjha Punjab on his Western Punjabi Wikipedia userpage. Abbas also created 20 articles on the Gurmukhi version of Punjabi Wikipedia besides editing several articles written by Indian users. In some ways, he seems to echo the statement of Shahmukhi-knowing Satdeep Gill: “I was even thinking one day we could unite both the Wikipedias into one.”
During my humble efforts to reach out to Western Punjabi Wikipedians, I was lucky to get a response from Khalid Mahmood, the lone admin of the Western Punjabi Wikipedia. As a professor of English, Khalid realized the immense difficulties faced by the students in learning English and favours dissemination of knowledge in native languages such as Punjabi. According to him, while there are only 7-8 active and dedicated contributors on Western Punjabi Wikipedia, the qualitative content generation of native language contributions has resulted in 23,000-27,000 clicks everyday, making it the most referred website in the language. For the last six years, the commencement and advancement of Western Punjabi Wikipedia remained a passion for Khalid. He considers the invitation and travel scholarship to Wikimania 2012 in Washigton DC and Wikimania 2014 in London as rewards for his dedicated efforts in starting Western Punjabi Wikipedia, Western Punjabi Wiktionary and Western Punjabi Wikiquote, which is likely to soon come out of incubation as a full-fledged Wikimedia project. Khalid wants to see Western Punjabi Wikipedia as a reliable source of information, a cultural centre for Punjabi people and a matter of pride for them. He wishes a friendly collaboration from the Indian Punjabi Wikipedians. While both Punjabi and Western Punjabi Wikipedias are witnessing growth and expansion, I consider it as a welcome gesture that the Punjabi Wikipedians across both India and Pakistan believe in the need for cooperation and collaboration and are even ready to work in a cordial and mutually beneficial manner on the Wikipedia sphere.
I would like to thank all Punjabi Wikipedians from both India and Pakistan for the valuable input used in this survey.
Syed Muzammiluddin, Wikipedian.