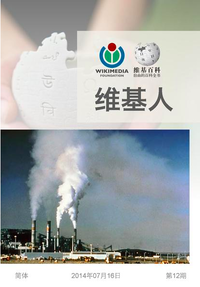 Front Page of The Wikipedian

Chinese Wikipedian Wilson Ye created an online magazine called The Wikipedian in December 2012, in partnership with Addis Wang and Eric Song. This project began as part of the Chinese Social Media Program as another way to connect the local community with the wider international community. Today it has over 500 subscribers on Chinese Wikipedia and is a new tool for spreading the idea of the Wikimedia movement to Chinese readers.
When Addis and Wilson first thought about creating an online magazine, they faced some challenges. Since 2005, many Chinese Wikipedians tried different ways to publish online magazines, but no one succeeded. These past failures brought up tough questions for the team regarding content and target audience. Instead of worrying, Wilson decided to make an experimental issue, which consisted of community news, abstracts of four Wikipedia articles and a featured picture. With a beautiful design by Eric, the first issue of the magazine received a lot of encouragement and advice.

After around six months of iterating on the magazine (which was originally published in simplified Chinese), The Wikipedian team published their first traditional Chinese version to promote news of the international community and interesting content contributed by community members to the Taiwan, Hong Kong and Macau communities. In a 2013 Wikimania special edition, the team invited the editors from Hong Kong and Taiwan to talk about their experiences at Wikimania. This was the first time The Wikipedian broke the geographical barrier to connect Chinese-speaking communities across countries.
Social media plays an important role in promoting the magazine. An account on weibo.com, funded by an Individual Engagement Grant from the Wikimedia Foundation, has become an incubator of new projects. With over 10,000 active followers, this social media account brings in a lot of attention to The Wikipedian and offers an easy way for its readers to provide feedback. One year later, now that The Wikipedian is itself an influencer, the magazine has in turn started to bring new followers to the social media account. This expands the diversity of followers and helps generate more influence in the Chinese-speaking world.
A Chinese proverb says: do not look at the sky from the bottom of a well, going outside is the only way to understand what the world you live in looks like. The Wikipedian would like to be one of the ways for Chinese Wikipedians to see and touch the broader international community.
Addis Wang, Coordinator of Wikimedia User Group China