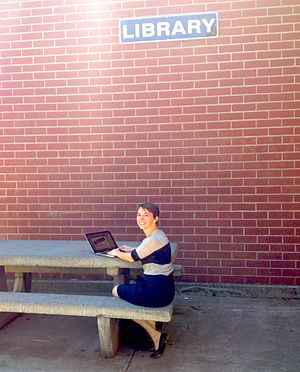 Anne in front of the Library at Diablo Valley College.

During her last year of high school, Anne Kingsley took a variety of classes at Sierra College, her local community college in Rocklin, CA. The experience greatly influenced her decision to pursue a career in teaching. “I loved the atmosphere of the community college and remember spending a lot of time printing out articles and copying books in the library,” Anne recalled. “I remember study groups with recent high school grads, returning students, veterans, single moms.”
The eclectic nature of the community college served her well in her first teaching position in 2002 at a New York organization called Friends of Island Academy (FOIA), where she helped youth in the criminal justice system gain literacy and other basic skills. At that time, the Internet was starting to become a valuable educational resource that would soon make photocopying books in the library a nostalgic pastime. Her time at FOIA was the beginning for discovering innovative ways to solve big educational problems. “Because I had to run a classroom that had very little materials and almost no budget, you had to be creative about content and curriculum design,” explained Kingsley. “This was a powerful experience to build a foundation for classroom experience as it taught me how to think outside of conventional teaching practices.” 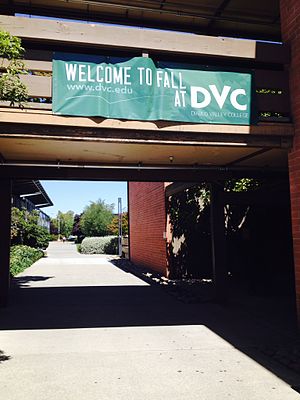 Anne went on to teach at Northeastern University, Menlo College and Santa Clara University. While at Northeastern she pursued her doctorate and was part of a training program where the faculty encouraged curriculums that incorporated new media into the classroom. “This was the beginning of blogs and Facebook, so I remember experimenting with these kinds of shared information sources,” said Anne. At the same time Wikipedia, only a few years old at the time, was becoming an increasingly comprehensive encyclopedia. Though in its onset Wikipedia had a reputation for being discouraged by teaching professionals, it has since slowly garnered support and trust from a number of institutions. Today Anne teaches at Diablo Valley College in Pleasant Hill, California, and finds herself once again experimenting with different teaching methods, including the use of Wikipedia.
Tired of assigning the standard research paper and disillusioned by its merits in the 21st century, Anne started to realize that technology has greatly altered the way we access information. Anne elaborates, “I kept thinking that technology has changed the place for research, so why do we keep handing in these static articles as though information doesn’t shift and change all the time. I also knew that old research papers that I had assigned my students were literally piled up in my closet, shoved into boxes, and forgotten about.” 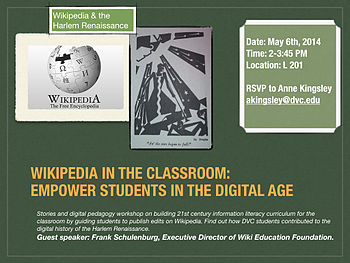 Wikipedia in the classroom.

Simultaneously, Anne kept hearing about underrepresented histories on Wikipedia – from women’s literature to African American history. Though underrepresentation of marginalized subjects is still a concern on Wikipedia, much is being done to address it thanks to people like Anne. “Given that I was teaching at a community college, I figured, let’s see what my students could do with Wikipedia. We all use Wikipedia, so why not see if we could become producers of information rather than just consumers.”
As a Harlem Renaissance enthusiast, Anne taught a course titled “Critical thinking: Composition and Literature Reading the Harlem Renaissance.” It was during this course that she experimented with her idea of producing information in a public forum as a method of learning. Part of the course was to edit articles pertaining to the Harlem Renaissance that were not covered fully on Wikipedia. Using online publications like The Crisis Magazine — an important early 20th century publication for African American culture — the students set out on a journey to research, edit and contribute to the world’s largest encyclopedia. 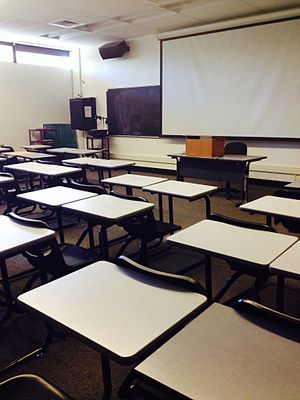 Anne and her students soon became aware of the initial learning gap that many new editors face with regards to the Wikipedia syntax. Though somewhat intimidating at first, Anne agrees that editing Wikipedia was a great way to teach students how to become literate in new media language. Her students weren’t the only ones learning something new, Anne explains, “It certainly opened their (and my) eyes to what takes place behind the nicely edited entries.” Another obstacle was trying to figure out how and where to contribute. Anne recalls a student who was hoping to contribute a “religion” entry to the Harlem Renaissance page. The challenge was to figure out where it belonged and how they would go about incorporating it into an existing page in a cohesive manner. Despite a period of adjustment, Anne makes it clear that the benefits her and the students garnered greatly outnumber any difficulties they might initially have had.
From an academic perspective, the assignment captured many of the elements of research that the course aimed to teach – understanding of source material, citation, scholarly research and careful language craft. The fact that Wikipedia is a public forum motivated the students in a manner that perhaps a normal research paper wouldn’t, that is to say, it no longer was just the professor who read the work but also other editors from around the world. The project also proved to be a great collaboration process between the students and the professor. The project lent itself to broader collaboration, especially when it came to the selection process and some of the smaller nuances of contributing to Wikipedia. The project also seemed to greatly improve composition, says Anne, “They (the students) would literally groom their language sentence by sentence – as opposed to earlier experiences writing seven-page research papers where the language fell apart.” Perhaps most satisfying for the students was the sense of accomplishment in seeing their hard work in a public space. Among the new articles created were pages for Arthur P. Davis, a section for religion in the Harlem Renaissance article and a page for Georgia Douglas Johnson – formerly a stub.
Anne expresses great interest in assigning this project again to her students. “I don’t always get to select the classes I teach, but if I had the opportunity to teach the Harlem Renaissance again, I would repeat this curriculum.” When asked what she would do differently, if anything, she replied, “More time. I only gave my students four weeks to create their entries. I did not realize how many of them would choose to create full-length articles or more complex entries.” Anne is part of a growing number of teaching professionals who choose to think outside the box and embrace new mediums in an effort to not only contribute to the greater good, but also prepare their students for a 21st century academic landscape. She had a clear message to her colleagues who perhaps might not be as embracing of Wikipedia in the classroom, she says, “Think big…students have this amazing capacity to want to experiment with you and others, especially when it makes their work visible and meaningful.”
Carlos Monterrey, Communications Associate at the Wikimedia Foundation