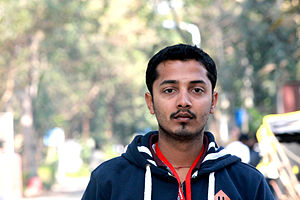 In June of 2014, the Wikimedia blog had an interview with Ram Prasad Joshi, a dedicated Wikipedian contributing in six languages – Nepali, Sanskrit, Hindi, Fiji Hindi, Bhojpuri and Gujarati from his unelectrified remote village in the Western hills of Nepal. A few days back, this linguist Wikipedian posted a message of appreciation on compatriot Biplab Anand’s Incubator talk page: “बिप्लवजी धन्यवाद यो विकिलाई बाहिर निकाल्ने प्रयास गर्नु पर्ने छ।” which translated states, “Biplab ji, thank you for the efforts to bring out this wiki” – referring to Biplab Anand’s dedicated approach in trying to transform Maithili Wikipedia from its current incubator status into a full-fledged Wikipedia. Apart from appreciation from several other Wikipedians, on August 17, 2014, Rajbiraj Today, a daily newspaper from Saptari, Nepal, carried a special feature highlighting the coordinated tasks accomplished by individuals such as Biplab Anand and Ganesh Paudel with a focus on the genesis of Maithili Wikipedia.
One of the strategies adopted in the effort to launch a Maithili Wikipedia has been the use of social media. Biplab Anand has created a Facebook page to spread awareness and educate the people on Maithili Wikipedia. At the time that I wrote this post, the page had garnered 116 likes. The next strategy adopted by Biplab was to post awareness messages for Maithili-knowing Wikipedians on other language Wikipedias where a substantial number of editors could also become aware of the language. As part of this strategy, a message was posted on the Hindi Wikipedia Village Pump. During Wikimania 2014, another Maithili Wikipedian, Ganesh Paudel, managed to meet MF-Warburg, the admin, bureaucrat and importer of Wikimedia Incubator and also the member of the Language Committee, to discuss ways of unleashing the potential of an independent Maithili Wikipedia (see this discussion). 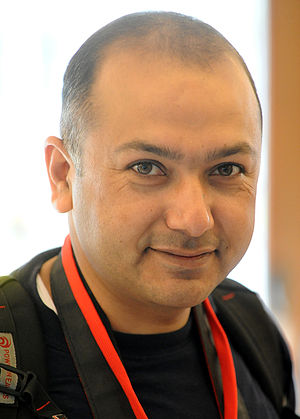 Ganesh Paudel, one of the high profile contributors of the Maithili and Nepali Wikipedias.

As these developments were in progress, I interviewed both Biplab Anand and Ganesh Paudel about the path ahead via a questionnaire. Both expressed their concern over the fact that a separate Maithili Wikipedia does not exist despite the language being native to over 40 million people in both Nepal and India. As to whether a Maithili organization can possibly support the language Wikipedia the way Samskrita Bharati does for Sanskrit Wikipedia (see this blog post), it emerged that currently it is not possible to expect such a strong institutional support for the cause. However, Biplab mentioned the possibility of garnering support from Maithili Sahitya Parishad Saptari Nepal in organizing Maithili Wikipedia Outreach programs in Nepal.
Regarding the quality improvement in the current content and contributions, it was felt that most of the articles are currently stubs and need revision. Similarly, the present articles are generally focused on personalities and places. However, a page on the essential prerequisite articles has been created and it is expected that as more editors join the arena, articles on diverse topics such as medicine, history, engineering, etc will also gain momentum. The vast geographical area where Maithili is spoken has given rise to a number of distinctly identifiable but mutually intelligible dialects. Biplab suggested the use of the Kalyani Maithili Dictionary as a standard for the language. Ganesh has identified several online resources which can be particularly helpful to the editors in accomplishing their tasks such as Bataah Maithili, Vidyapati, Videha, Mithila News, Esamaad and Mithila Lok. He also suggested that the next Maithili project could be the language Wikisource to start the documentation of ancient works.
There is a spirit of achievement among the small but growing community of Maithili Wikipedians, who are currently between 50-60 in number. Biplab Anand confirmed the presence of more than 1000 articles on the Maithili Incubator Project on his Hindi Wikipedia talk page. On the other hand, Ganesh Paudel highlighted that his efforts are not ending by simply getting the Maithili Wikipedia out of the incubator as he is equally concerned about having independent Limbu, Gurung, Tamang and Awadhi Wikipedias. He also spoke about a self-confident approach as a key to success in his statement “if you want Wikipedia in your language come forth, you are the best one to contribute for the growth of your language.” An encouraging development in this context is the assurance by MF-Warburg: “I’ll be glad to approve this project when the activity criteria are met,” referring to the need for sustained editing activity by the dedicated contributors for the next few months to get Maithili Wikipedia as a live and thriving project in the coming months.
Syed Muzammiluddin, Wikipedian