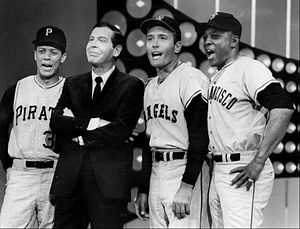 Last month, the Wikipedia Signpost, the English Wikipedia’s community-written newsletter, talked with three members of WikiProject Baseball: users Go Phightins!, Wizardman and isaacl. A WikiProject is a team of contributors who aim to improve Wikipedia articles on a specific topic. Every WikiProject has a special focus area (for example, American history). In this case, the subject is baseball.
Like many Wikipedia editors, WikiProject contributors are often motivated by a great passion for a given topic. Perhaps user Go Phightins! embodies this devotion best. “Baseball is a sport that I really enjoy and is the namesake of my username, as a matter of fact, the Philadelphia Phillies are known colloquially as the Phightin Phils.” For contributors, WikiProject baseball is not just a way to contribute to baseball-related articles, it’s also a place to talk all things baseball with other liked-minded individuals, explains user issacl. “Discussions on the project talk page are generally constructive and embody a cooperative spirit, which keeps editors interested.” 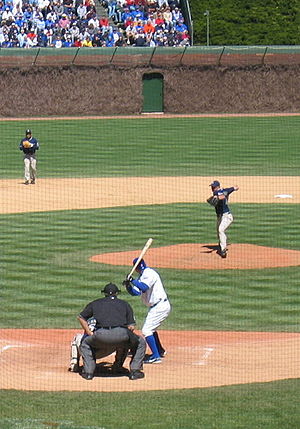 Every WikiProject has its own peculiarities specific to that topic. For example, WikiProject cities has to keep a constant watch for changing factors within a city like population or transportation. WikiProject Baseball is no different in its constant efforts to maintain baseball articles as up-to-date as possible – especially during the active season. “One of the most crucial aspects of the project is stat updates and vandalism watches to articles, especially on current players,” explains Go Phightins. Maintenance gets particularly busy during times of great commotion, like the trade deadline midway through the season. “There is rampant speculation within the media about baseball players and transactions between teams, so upholding the principle of WP:CRYSTAL [“Wikipedia is not a crystal ball”] by refuting speculative edits while at the same time remaining committed to being an encyclopedia anyone can edit is a time-consuming, but ultimately worthwhile task.”
Though this may all seem like a lot of work, rewards come in the form of knowing that you’ve contributed to the collective knowledge on a topic that is important to you – and occasionally your work might earn recognition as a featured article, too. Wizardman and Go Phightins! both have enjoyed having some of their articles featured. Go Phightins! explains, “Jim Thome, my one and only featured article, played Major League Baseball for 20+ years and reached featured status after more than a year of work. I thoroughly enjoyed working on his article, as he was one of my favorite players back when he was a member of the Phillies and really is a ‘good guy.’” Wizardman adds, “I’ve contributed several featured articles and good articles over my time. Greatest is tough to say, but it would be between Bob Feller, which was already a good article that I completely modified to get through to featured article status and Harmon Killebrew, which was a stub I suggested as a collaboration that eventually progressed from good to featured.”
When asked what else they wanted to share, Go Phightins! stressed the good-natured environment of WikiProject Baseball. “The editors at WikiProject Baseball are an awesome group of folks with whom to collaborate on articles, but perhaps more importantly, are dedicated to enforcing Wikipedia policy with tact and excellence in dealing with new and clueless contributors (a group of which I was once a member).” Wizardman jokingly adds, “It’s both a great and easy project to get involved in, even if you like the [rival team] you’re still welcome!” If you find yourself fond of baseball, interested in sports stats and looking for a great community to share a mutual interest, then WikiProject Baseball might be for you. User isaacl puts it simply: “With the state of baseball analysis ever-improving, competition in MLB continues to be fierce, and we are the beneficiaries—enjoy the season!”
For more info on WikiProject Baseball, read the full Signpost interview by user Seattle, or go to the WikiProject’s overview page.
Report by Carlos Monterrey, communications associate for the Wikimedia Foundation