Wikipedians and Wikimedia Foundation partner to experiment with microgrants

Wikimedia Foundation Grants teamed up with The Wikipedia Library to open an Arabic, community-run branch

In early 2014 the Wikimedia Foundation began an experiment to better support individual contributors to Wikimedia projects, by giving out smaller grants to more individuals (complementing our existing grants to organizations, which mainly fund offline activities). We started by selecting a global south community that did not already have a local chapter meeting its needs: Arabic Wikipedia. We wanted to make grants that the community would find useful, so we asked them in a consultation, what kinds of small resources do you need? “Books!” was the primary answer we got, so we focused the pilot in that direction.
At this point, WMF staffers connected in the organizers of The Wikipedia Library, a community project (also WMF-funded) that helps editors access reliable sources. The Wikipedia Library already had experience delivering journal access to lots of editors on English Wikipedia, but they had not yet set up similar programs for other language communities, nor experimented with offering resources besides journals before. Their community-coordinator model appeared to offer a scalable way for distributing small resources to many editors, and they were looking for new ways to expand beyond serving the needs of English Wikipedians. Partnering on an Arabic pilot was a natural fit. 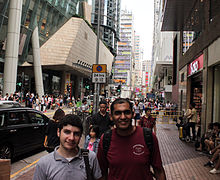 Mohamed Ouda and عباد ديرانية set up and coordinated the Arabic Wikipedia Library.

The next step was to find local partners in the Arabic community to lead the Arabic Wikipedia Library. We ran signups for local community coordinators to vet requests and purchase and track books, and selected two: User:Mohamed Ouda and User:عباد ديرانية.

To buy and globally ship books requested on Arabic Wikipedia, we needed pages where editors could ask for a book, payment options that volunteers could securely use to purchase books, and a way to track everything as it happened.
We made our first test purchases using Amazon.com and Neelwafurat.com (a popular Arabic bookseller). It was surprisingly difficult to get money to the local Arabic Coordinators for purchasing books in ways that were both user-friendly and easy to track. Providing them with prepaid cards, our first strategy, seemed like a good direction, but we weren’t able to find a card that WMF could purchase in the US for use by coordinators internationally. We ultimately employed a very old strategy – bank wire transfers – and worked with WMF’s finance team to add standardized processes for two other payment transfer options – Paypal and Western Union – to meet our needs for controls and flexibility.
Leveraging the existing journal access program run by The Wikipedia Library, we looked to a page design that could expand globally through a more modular set of pages. If The Wikipedia Library was going to serve many different communities, all with different needs, then its portal needed to be clear and distinct but its options needed to be adaptable and flexible. We translated the new kit into Arabic Wikipedia Library Pages: a portal page, book purchases, journal requests, and one for sharing sources between editors.

The kit pages used a customizable request template which let volunteers make requests and then interact with the local coordinators to facilitate on-wiki tracking of which books they wanted, when they received them, and how they used them.

Over the four months that the program was running, we purchased 14 books out of 19 that were requested. We shipped books to Spain, Saudi Arabia, Egypt, and Tunisia. Books like: Turks and Moroccans and Englishmen in the Age of Discovery, and July Revolution: Pros and cons after half a century. On the average, books cost $20 and shipping cost $10.

Our biggest challenge by far in purchasing books was shipping. It has been difficult to get booksellers (even regional ones) to ship books from the country where the book is stocked to many of the countries where Arabic Wikipedians have requested them. In the case of Amazon, postal codes are required for shipping, and it turns out that some editors in the MENA region do not have postal codes. We failed to have books shipped to Palestine, Jordan, Morocco, and in one case Egypt. In the first month of the pilot, this prevented about half of the requests from being successfully processed. Trouble with shipping a significant portion of requests made us hesitant to broadcast signups more widely. As a result, we fell short of our target of having 40 books successfully purchased, shipped, and used to improve or create new encyclopedia content during this pilot.
Another significant challenge was in reporting itself. It was hard to know if books were received, because despite volunteer-coordinator-pinging, only 2 books were ever marked as having gotten into the hands of the editor who they were shipped to. At this point, we still don’t have enough data to understand if the books had any impact on Wikipedia, as no editors came back to update their request with a short list or link of the articles that they improved or created.

The Wikipedia Library remains on Arabic Wikipedia, but we’re taking focus off making book requests work. Editors can still request books for the time being, and if they’re easy to send we’ll still ship them, but the Arabic coordinators are resetting expectations to clarify that not all requests can be met, and we’re not going to waste more volunteer time on complicated workarounds or invest further in solving these issues. If/when there is sufficient data on successfully received book requests at some point in the future, we’ll still aim to analyze the impact of book grants on the encyclopedia, to continue learning from this project.
This report will now be used as a starting point to go back to the Arabic community again for further consultation. We leave it to the Arabic community to decide whether to continue the Wikipedia Library and attempt to focus on providing other types of resources, and/or move in some other direction for supporting Arabic editors.
The pilot participants: