Illustration for the article metaphor. In Norwegian language the expression “the King of the forest” is a metaphor for moose.
“Skogens konge” by Synne A. Salvesen, under CC-BY-SA-4.0

In June 2014, Wikimedia Norge was contacted by Andreas Berg, a professor of illustrations at the department of graphic design and illustration at the Oslo National Academy of the Arts. He had an idea. In preparation for the upcoming fall semester, he drafted a workshop that centered on Wikipedia. The aim of this workshop was to teach students how to design and make use of freely licenced illustrations.
Wikimedia Norge adopted the proposal and compiled a list of 100 Wikipedia articles that were without illustrations. An academic program was created, comprising of six lectures. Over the course of the series, the topics ranged from the transition of print to online encyclopedias, over gender issues in dictionaries, to the use of cultural “big data”. Students would be taught how to use free licences, and how deconstruct the elements that make a successful illustration. 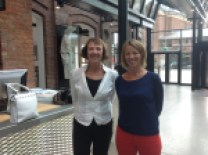 Professor at the University of Oslo, Ruth E. Vatvedt Fjeld and research librarian at the National Library of Norway, ph.d. Siv Frøydis Berg both held lectures at the workshop.
“Making illustrations for Wikipedia 09” by WMNOastrid, under CC-BY-SA-4.0

We reached out to a variety of people, some from past collaborations and others we had heard speak at conferences. Our requests were well received; however, it was difficult to narrow down specific articles. After extensive creative help and good advice from Svein Nyhus, both an award winning illustrator and a Wikipedian, we chose a list that consisted mostly of articles about abstract words. Here are some examples: inner peace, power nap, master suppression techniques, shame, political asylum and rapid eye movement sleep. 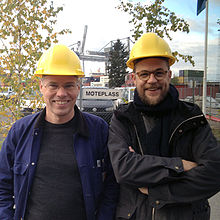 Andreas Berg and Martin Egge Lundell, professors at the Oslo National Academy of the Arts.
“Making illustrations for Wikipedia 08” by WMNOastrid, under CC-BY-SA-4.0

Encyclopedias are a pillar of Western culture. The French Encyclopédie has represented the ideal of an inseparable basic structure of text and images in a national framework for over 200 years. This alone, with its complex implications, is good enough reason for professors Berg and his colleague Martin Egge Lundell to deal with encyclopedias: “Up until fifteen years ago, major projects were in process all over the world to create national encyclopedias. It was considered a state responsibility. Nationalism was empowered by authority. The Internet has completely reshaped the concept of encyclopedias, and Wikimedia projects have been a driving force in that development.” 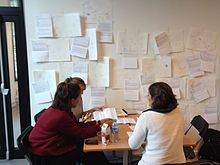 The students hang all the Wikipedia articles up on the wall, and as they got ideas, made drafts and hang them up next to the articles.
“Making illustrations for Wikipeida 07” by WMNOastrid, under CC-BY-SA-4.0

On the second day, the best drafts were selected for uploading to Wikimedia Commons.
“Making illustrations for Wikipeida 07” by WMNOastrid, under CC-BY-SA-4.0

Berg and Lundell approached Wikimedia Norge with the idea of a two day workshop for 50 students of illustration and graphic design, an experiment with the aim to produce one hundred illustrations for Wikipedia. Designing scientific images for encyclopedias was a sharp contrast to the work students were used to creating. «With Pang-Start 2014 we wanted to get the students as a group to playfully use their abilities and skills, taking into account the responsibility that comes with any kind of interference in the media», say Berg and Lundell.
Pang-Start 2014 dealt with general questions within the field of graphic design and illustration: Who decides the content? What is the difference between user and producer? What is possible to communicate and what is not? And specifically, when it comes to the free encyclopedia: What is national and what is international on Wikipedia? Who is in charge? Who really cares about the design and the images? And, last but not least, how to contribute?
The workshop resulted in the publication of 72 distinct illustrations, that have been thus far put to use on Bokmål Wikipedia, Nynorsk Wikipedia (2 Norwegian Wikipedias), Indonesian Wiktionary, English Wikipedia and Arabian Wikipedia. You can see all the illustrations by clicking here.
Contribution can have many forms, and most importantly, a wide range of meanings for the person who decides to take part. Help us expand this project and take its stories further: share, contribute, and use the images we brought on the Wikimedia projects!