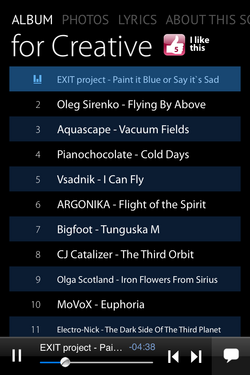 3plet is a format of digital editing and distributing of musical albums combining the audio recording, visual images (as slideshow) and text. The three components constitute an application that is distributed via App Store and Google Play.

The album itself contains 12 tracks recorded by leading musicians working in the downtempo, chillout, and ambient styles – Oleg Syrenko, Olga Scotland, Aquascape, Argonika, Bigfoot, Electro-Nick, etc. Every track is followed by a picturesque slideshow: the charming depths of space, the images of other worlds, native reserve areas, mysterious natural phenomena, intricate abstract designs. One should especially mention the decoration of Bigfoot’s Tunguska M track, provided by Vitaly Romeyko, a well-known researcher of the Tunguska phenomenon, which was made out of pictures taken during his expeditions to the Tunguska region.

The text component of the album includes some extracts of Wikipedia articles having something in common with the compositions and the “spacelike” mood of the album itself. While listening to the magical music, one can learn about the brightest star in the Universe, the atmosphere of Venus, what vacuum is made of, what the difference is between a solar sail and an ordinary one, whether levitation could be really performed, what makes night so charming to our eyes, as well as the way to reach absolute zero and an euphoric feeling.

In concordance with the name of the album, all its audio, video and textual contents are being distributed under a free license. It is the first release of this kind to happen in Russia. Everybody can view this release – both Android and iOS versions are available. Download it here: