Wikipedians arriving with luggage to the museum.
”Segundo Editatón Soumaya Abierto 17″ by ProtoplasmaKid under CC-BY-SA-4.0 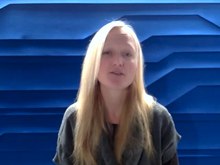 Opening message by Lila Tretikov, executive director of the WMF.

All the talks in English were translated to Spanish.
”Segundo Editatón Soumaya Abierto – Dia dos – 21″ by ProtoplasmaKid, under CC-BY-SA-4.0

We had the rare chance to visit a museum overnight, as Wikipedians, guided by experts. We definitely never thought we would eat and sleep inside the museum for over two days! This opportunity materialized during the last weekend in September, at Mexico City’s Soumaya Museum in Plaza Carso. The editathon, Soumaya Abierto, 50 horas de arte (“Open Soumaya, 50 hours of Art”), was a 50-hour marathon of continuous Wikipedia editing in several languages, lasting from September 26 -28th. It was longest continuous editathon ever recorded in the movement, with 64 new articles created in several languages, and over 1,100 total edits to the Wikimedia projects were made.
The museum is host to a private collection of over 66,000 pieces, spanning six centuries of art from Mexico and around the world. It’s the only museum in Mexico City open 365 days a year, (from 10am-7pm) and it is free of charge. For this editathon, the museum kept its doors open for Wikipedians and the general public throughout the 50 hours. During the weekend, the museum was attended by 10,342 visitors. Several activities happened during these days, including conferences, guided tours, plays and a special program for us Wikipedians. We also offered intensive workshops for beginners about basic Wikipedia editing. We were honored to share this time with the people working at the museum: the director, curators, researchers and tour guides who stood beside us in the titanic effort of working 50 hours straight, writing and sharing in a unique cultural experience, both in Mexico and the Wikimedia movement.
The editathon required two months of intensive logistical planning between the museum’s staff and the local Wikipedian-in-Residence, Iván Martínez. There were five pre-event workshops and two talks about Wikipedia and its collaborations with cultural institutions. It’s worth noting that these talks were given to staff members who weren’t directly involved with content creation during the event itself.

On Friday afternoon, Wikipedians began arriving at the museum with suitcases, tents, sleeping bags, pillows and blankets. They were ready to start editing! The event started at 6pm with a guided tour of all the halls and permanent collections by Héctor Palhares Meza, curator of the museum.
Shortly before 8pm we had everything ready to go: books, computers, power, internet, coffee, snacks and the excitement we had been storing up since the event was first announced.
The formal inauguration began with a brief speech by Alfonso Miranda Márquez, Director of Museo Soumaya, followed by Iván Martínez, who is also the President of the Wikimedia Mexico (WMMX) chapter. The event unveiled the new design of the museum’s website and we screened a recorded message by Lila Tretikov, Executive Director of the Wikimedia Foundation.

At exactly 8pm, Alfonso Miranda marked the official start of the editathon among thunderous applause. We had a long stretch of work ahead of us.
The initial list had approximately 50 new articles and a few more marked for improvements. The museum’s staff had active participation with us during the whole event; researchers, curators, restorers, museographers, tour guides and the museum director himself were with us to teach us, assist us with polishing the text, find reputable sources and even showing us the history, details, and influences of several artists and pieces.
We kept a tally of major edits in a whiteboard. Eight expert WMMX editors kept up with whiteboard duty, and also served as Wikipedia consultants/ teachers to the assistants.
We had hot food and drinks provided to us during the 50 hours, including snacks so we could edit without worrying or stopping. The museum went above and beyond, and offered an additional program for the Wikipedians, including a play, dramatized tours and a special visit to a TV studio (UnoTV), while a team stayed editing the whole time.

Just after midnight, the Wikipedians who signed up to write about impressionist artists and paintings met for a specialized tour about Impressionism, Monet and Degas. In this tour we learned about the artists and their lives, dates and cultural contexts. On our way down, the guides stayed with us to help us with specific questions and recommended several books to get information from, before helping us with the edits themselves.
Around 2am, we started our sleeping rotation so that there would always be a team editing while the rest slept, bathed, and ate. The tally was updated every hour. The museum staff wore badges in which they specified their areas of expertise in particular artists or artistic movements.
We were seated in six tables roughly grouped by theme, but we were constantly moving, not only to help each other in editing, but to interact, to create new friendships and renew old ones.
The first night shift consisted of four Wikipedians, who kept on editing throughout the night until the next shift slept, bathed and had breakfast. At 8am the smell of hot coffee woke us up and signaled the night shift to go and get some rest.
At 10am we started the first of six workshops we would conduct during the event. We paused the workshop briefly to assist with the videoconference, “Collaboration between Wikimedia and Cultural Institutions” by Jonathan Cardy, GLAM Organizer at Wikimedia UK. Unfortunately, there were several connectivity issues that made simultaneous translation impossible.
The next workshop was given by Herminia Din, from the American Alliance of Museums, about museums and online learning. The Anchorage University academic showed us how the Alliance is developing platforms for online learning with museums and education institutions in the United States. Then came Liam Wyatt, coordinator of cultural alliances at Europeana, who spoke about the history of the collaborations within the GLAM movement.
The guided tours, edits and photographs came one after another: Van Gogh, Gauguin, Camille Claudel, Landecio, José María Velasco, Tintoretto, El Greco, Rubens, Mannerism, Expressionism, Baroque — it all went in through our eyes, out through our fingers, on to our keyboards and then to Wikipedia.
Late at night, the Museum Director, Alfonso Miranda Márquez, guided us on a tour to the temporary exhibition “Sophia Loren México. Ayer, hoy y mañana” (“Sophia Loren in Mexico. Yesterday, today and tomorrow”), finishing off our Saturday with a very pleasant experience learning about the life and work of the diva.

In the afternoon, there was a talk about the conservation efforts made by the museum, by Sergio Sandoval Arias and Pilar Leñero Llaca. One of the members of WMMX’s board, Alan Lazalde, also gave a talk about Open Culture and Hacker Culture. Then came Agustín Peña, of the radio station Ibero 90.9; Jorge Martínez Micher, Mexico City Secretary of Culture, and Alfonso Miranda sharing their experiences on internet, digital resources and their own activities in the cultural sector of Mexico.
For Alfonso Mirando, the editathon is “…an effort in joint efforts, cross-discipline teams and, above all, vehement work on building open knowledge. (…) knowledge that is shared in a transparent way, without protagonists, without the idea of, I’m the one who creates [knowledge] and I protect it as mine.”
Even though we were all tired, we never faltered and were ready for the final hours. The teams were alternating between brief visits to the museum and editing. The last part of the editathon was held up mostly by the research and curator staff of the museum, who helped us with fact-checking and style corrections. At 10:01pm everyone present began the countdown, New-Year style, marking the end of the challenge. The museum recognized the most prolific editors with a few gifts and we celebrated with a closing cocktail party.
The interest from galleries, archives, libraries, museums and cultural spaces in Wikimedia projects has increased in these last few years, thanks to the work of the volunteers of the Mexican chapter. Museo Soumaya, part of the Carlos Slim Foundation, has decided to work in alliance with Wikimedia Mexico, and to become a museum that embraces Wikipedia as one of its most important projects. We extend a formal invitation to all Mexican cultural institutions to join us in collaborations with the Wikimedia projects.