When Jimmy Wales launched Wikipedia in 2001, it’s unlikely he imagined that it would become the biggest encyclopedia in human history. Or, that it would be honored with a monument. 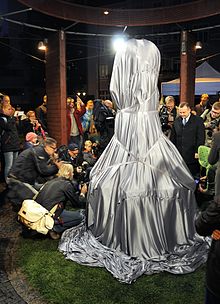 Crowds eagerly waited for the Wikipedia monument in Słubice to be unveiled.

“Celebration of the Wikipedia monument in Słubice – unveiling (DerHexer) 05” by DerHexer, under CC-BY-SA-3.0

Notably, the idea for that monument did not come not from the Wikipedians themselves, but from an academic and director of a university.

Dr. Krzysztof Wojciechowski is the the head of Collegium Polonicum, located in Słubice, a small town near the Polish-German border. It is a cross-border academic institution maintained jointly by University Viadrina and the Adam Mickiewicz University. Dr Wojciechowski has always held great respect for Wikipedians and their mission to provide every human being with unlimited access to the sum of human knowledge. He also thought that in times when people seem to reach for almost every opportunity to gain fame, an army of volunteers working anonymously for the greater good is something unique and deserving of recognition. He came up with the idea to erect a monument as a homage to Wikipedians. Słubice, a town where a variety of cultures and languages meet, seemed to be the perfect place to pay respect to this international and multilingual community.

The dream was beautiful, but difficult to bring to reality. It took Mr. Wojciechowski three years to find someone who would support his idea. Finally, it happened to be Tomasz Ciszewicz, the mayor of Słubice who helped bring it to fruition. The city of Słubice supported the creation of the monument with 62,000 PLN (approximately $18,000).

Mihran Hakobyan, the Armenian artist who created the sculpture.

“Celebration of the Wikipedia monument in Słubice – unveiling (DerHexer) 21” by DerHexer, under CC-BY-SA-3.0

Dr. Wojciechowski invited Mihran Hakobyan, an Armenian artist and a former student of Collegium Polonicum, to create the sculpture. The result is astonishing. The monument depicts two men and two women holding the Wikipedia puzzle globe. The characters stand on sheets of paper which, according to Dr. Wojciechowski, represent the culture of print from which we all derive. The globe that they hold is open, as is our mission of gathering human knowledge. As Sebastian Wallroth from Wikimedia Deutschland put it in his speech at the monument’s unveiling ceremony: Wikipedia is a living organism, growing with the knowledge of humanity, struggling with the knowledge and changing with the knowledge (…) Mihran Hakobyan’s sculpture expresses that very well.

The ceremony, but also the preceding preparations, were widely noticed in international media, as the monument is the first of its kind in the world. Aside from the Polish press, the news of the coming unveiling ceremony sailed international waters. Recognizable titles as Der Spiegel and The Independent, and countries including Armenia covered the ceremony. Almost 28,000 titles followed the Associated Press news release.

There was also a lot of excitement within the Wikimedia community itself, as Wikimedians felt deep gratitude and joy that their work was recognized. The Wikimedia Poland association decided that the Wikimedia community should have the chance to express their gratitude for the monument. We came up with the idea of a commemorative book gathering messages written by Wikipedians from all over the world. We only had a few days to collect the thoughts of the Wikimedia community in regards to the initiative, but received a plethora of inputs, including some warm words from Lila Tretikov, the executive director of the Wikimedia Foundation and Jimmy “Jimbo” Wales, the founding father of Wikipedia. Also, a note was added from Tomasz Ganicz, the President of the Board of the Wikimedia Polska association, and the Wikipedia article describing the Wikipedia monument, already published in 22 languages. The outcome was printed and presented to Mr. Wojciechowski and mayor Ciszewicz during the ceremony by Natalia Szafran-Kozakowska, of Wikimedia Poland. The ceremony was preceded by a presentation about the role of conflicts in Wikipedia by professor Dariusz Jemielniak, author of the first ever ethnography of the Wikipedia community, called “Common knowledge? An Ethnography of Wikipedia.” There was also a panel discussion about the future of Wikipedia, moderated by Jemielniak, with participation by Garfield Byrd from the Wikimedia Foundation, Sebastian Wallroth from Wikimedia Deutschland and Natalia Szafran-Kozakowska from Wikimedia Poland. The panel participants discussed the gender gap in the Wikipedia community, the role of Wikipedia in protecting the freedom of information on the Internet, and the issues stemming from neutrality and paid editing.

Celebration of the Wikipedia monument in Słubice.

Soon after the discussion, panelists and audience members made their way to the Frankfurt Square, where the long awaited unveiling was about to begin. Mayor Ciszewicz and Mr. Wojciechowski welcomed the gathered guests. The head of Collegium Polonicum said that the fact that an online encyclopedia created by thousands of volunteers from all over the world was credible, and free of plagiarism and lies, is proof that altruistic and peaceful cooperation between people of different languages, cultures, and religions is possible. Then, the representatives of the Wikimedia community were asked to speak.

Natalia Szafran-Kozakowska from Wikimedia Poland said that Wikipedians work anonymously and voluntarily, not hoping for any rewards and certainly not hoping for being honored with monuments. They do it because they believe that by giving people access to free knowledge, they are handing the global community the tools to make the world a better place, by maintaining humankind’s natural curiosity about the world. “I see this beautiful monument created by Mihran Hakobyan as a sign that our readers understand our mission and support it and that Wikipedia has become something important in their lives. That kind of recognition is very motivating,” concluded Szafran-Kozakowska.

In his speech, Sebastian Wallroth from Wikimedia Germany questioned why Wikipedia, of all internet initiatives, as an unfinished project which is and always will be in the process of changing and growing, should have its monument. Furthermore, why should this monument be placed in Słubice? He pointed out that the German word for monument, “Denkmal”, came from Martin Luther who had used it in a meaning of “memory aid” and that this is what the monument should become for the volunteers of free knowledge. “I would appreciate if Wikipedians would meet every year at the “memory aid” to have a short satisfied look at what has been done and then, with an unsatisfied expression, would continue to rake over the wide field of Free Knowledge in front of us,” Wallroth added. He also said that Słubice, a university town essentially situated on a language and a country border, was a perfect place for a monument dedicated to an international project.

“Celebration of the Wikipedia monument in Słubice – unveiling (DerHexer) 19” by DerHexer, under CC-BY-SA-4.0

Garfield Byrd from the Wikimedia Foundation expressed his appreciation for the opportunity to represent the Wikimedia Foundation and its executive director Lila Tretikov. He gave his thanks to Dr.Wojciechowski, the mayor and the artist for their vision in creating a monument that pays tribute to the volunteers who edit Wikipedia. He also expressed thanks to the world of volunteers Wikipedia and the other Wiki projects made possible, as well as the volunteers for participation in this ceremony. After the speeches, mayor Ciszewicz and Mihran Hakobyan unveiled the statue which immediately became the centre of attention.

Was the ceremony successful? In the words of professor Dariusz Jemielniak: “It was a great event! Truly professionally organized, and well-executed. Mr. Wojciechowski has been following his dream for many years, and with the support from the local mayor and authorities made history in a way that will be difficult to match within the Wikimedia movement. I believe that Słubice should become a regular meet-up place for Wikimedians from the CEE region, especially from Poland and Germany, and the local infrastructure (hotels, restaurants, as well as university halls run by people friendly to our movement) make it a perfect focal point. I hope to come back!”