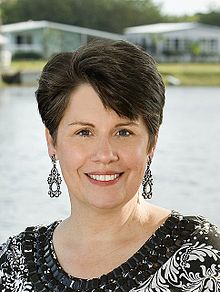 After working on Wall Street for more than a decade, Suzanne Fox decided it was time to follow her calling in creative writing. She left behind writing marketing materials to embark on writing fictional novels. Fox set her mind on writing a literary novel set in 1850s Great Britain, but found it challenging to write prolifically about an era she has never known. That’s when she turned to Wikipedia for inspiration, and found that she could relive some of the past she was looking for.

For Fox, who is now 59 years old, the process of writing a novel begins with an abstract idea of a scene she wants to describe. Then the details of the scene are filled in with descriptions from Wikipedia articles she has read. Fox defines this process as “taking ownership of that place and turning it back into an imaginary place.”

“[Wikipedia] is my go-to starting place for the information that I need for that scene,” says Fox, who now lives in Vero Beach, Florida. “I can also make use of the external links, which is a really helpful thing for me.”

Each of Fox’s characters (depending on the era they are set in) are researched carefully on aspects as simple as how they are going from one place to the other. For instance, she looks up details on carriages that could have assisted transportation during the Victorian era.

“As a writer who wants to write something that feels authentic, and to live inside a character’s head, you’re inevitably living inside not only their head, but their corset, their clothing, you know, their hat, their carriage, their house,” says Fox.

In an attempt to be as historically accurate as possible, Fox has researched the dates of events related to her characters on Wikipedia. Once she was writing about the 1850s and had to reconsider introducing the crinoline petticoat because it was invented after when her book took place.

Growing up in New Jersey and later moving to Manhattan, Fox has always found herself in “a place [with] research opportunities galore.” After graduating with an art history degree from Douglass College, Fox started working for a firm as a marketing writer.

“But at a certain point I realized that this was not really, you know, my soul and I started doing my own writing. I started out writing poetry of all things.” says Fox.

She left her position and pursued a masters degree in poetry at Columbia University. There were three compelling reasons she was drawn to poetry:

“The good thing about poetry not having money attached to it for the most part [is] that there’s no real reason not to be authentic… I think poetry is about a delight in language and kind of about the selection of language and the beauty of the English language. So for that reason also, it was deeply nurturing to me.”

But Fox says she surprised herself by working on a memoir rather than poetry after graduation. After completing her masters, she began to work on her first book, “Home Life: A Journey of Rooms and Recollections” which was published in 1997 and had been inspired by the many houses she had been living in.

As a writer, Fox has found herself acquainted with various time periods that prompt her to read about on Wikipedia. For instance, when she was editing and contributing to a novel about 17th century Ireland, she found herself imagining scenes and reading Wikipedia articles to flesh out the details.

“I think it’s the history, I think it’s the fence of uniqueness in each one that the way people live in places and decorate places, the kind of art form of it, it’s formed the core of all of my writing,” says Fox.

Researching artifacts and events that are no longer contemporary seem easier with Wikipedia now, but Fox says she remembers a time when researching the past wasn’t so easy. She cites “the lack of ability to cite quick facts,” as challenging to her research before Wikipedia.

“With Wikipedia I think, you get the best of both worlds,” Fox explains. On one hand, she appreciates the immediacy of being able to find articles that are easy to comprehend. On the other hand she enjoys bookmarking articles that she wants to refer to later. Her latest reads include: looking up bloomers, reading about John Thompson, Augustus Egg and many other historical figures.

“I feel more connected to Wikipedia, thinking of myself as somebody who is a contributor to it,” says Fox. “And there’s a value in that, a reminder that I have power to support something.”

“What spoke to me [was] this incredible resource that I’m benefiting from and it takes money to do this even when it’s something that people are contributing to for free,” says Fox. “[Having] Wikipedia is like having the best reference librarian in the world.”

2014-11-07: Edited to correct the place of upbringing and the description of “Home Life”