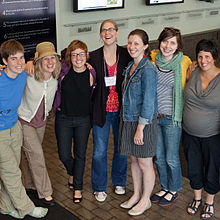 After the first Wikimania was organized in Frankfurt, Germany in 2005, it was clear that alongside the virtual channels that we rely on every day, Wikimedia community members are in need of physical meeting spaces. They allow to build stronger networks of trust and friendship, share experiences, and create new ideas with peers from all across the globe.

Our international conferences have become more complex. In 2005, 380 participants were brought together; in 2014, attendance numbers grew more than 5 times, as Wikimania was attended by over 2000 people. These gatherings are inspirational and fun, and held alongside the more specialized meetings focused on particular programs and regions.

Some of the complexity stems from getting the conference off the ground. Important questions to keep in mind are: What kind of Wikimedia grants are funding these meetings? What does a successful proposal look like?

Plan: What do you want to achieve?

Planning an international gathering can be broken into three different phases: goals, program and schedule, and evaluation. In the first phase, organizers establish the goals and main themes of the conference. International conferences are expensive and logistics are complicated, so the first question the WMF would want answered is the rationale: Why have this event at all? Why does it need international participation? Is there a demonstrated need for it?

During the programming phase you brainstorm ideas for the specific sessions and activities in the event program. It’s a good idea to survey the prospective participants to learn what they want from the conference. These actions shape the evaluation plan of the conference. It is important to establish goals, design sessions and formats (will there be a talk? a workshop? a brainstorm?) and work on the metrics you’ll use to measure your success.

Galileo Vidoni, organizer of Iberoconf 2014, the international meeting that brings together Wikimedia organizations from Latin America, Spain and Italy says, “We want to showcase the conference as another link in the chain of work that goes on during the year, rather than as an isolated event.” He describes the efforts that have gone into improving the way the success of conferences are measured, and says, “Unlike last year, in 2014 we submitted a more detailed plan, with the metrics we will use to measure our results, against goals. We also highlighted the continuous discussions and agreements developed at Iberoconf 2013.”

Each conference has a different history and hence, different goals. While Iberoconf is heading towards its fourth edition and is already working on programs across chapters, Wiki Indaba in 2014 was the first event of its kind in the region. One of its goals was very simple: bring together experienced Wikipedians from across Africa, to build best practices around outreach, and to form a wider community.

Since travel expenses usually form the highest cost of international gatherings, it is advised to seek deals with travel agencies or airline national offices to get a discounted rate. This is also why it is important to be selective in inviting participants. You not only want people who can demonstrate their activity (online and offline) in the Wikimedia movement, but also those with ability to both contribute their experiences and share the knowledge gained in their local community (also known as multipliers).

Another common topic raised in recent reviews of international gatherings was the preparation for the event. Participants are expected to be prepared for discussions, having read previously any resources available, and leaving the meeting with a clear idea of the opportunities that lie in the future for working together. If you are organizing the event, how will you ensure this is happening as much as possible? Some possible methods are pre-event surveys and SWOT analyses.

Apply: Secure funds and resources for your conference

If you need funding for your event, you should apply for a Project and Event Grant (PEG). The PEG program accepts proposals at any time, but be sure to submit your proposal early. We recommend at least 3 months in advance of the meeting to allow time for review by the Grant Advisory Committee, discussion, and revision, as well as purchasing flights at reasonable rates, if necessary. If you have questions about the process, contact the grants team early on. All of the WMF grants programs aim to increase the reach, participation in, and quality of Wikimedia projects, and grow local free knowledge.

This last goal is, in Galileo’s view, why the community supports Iberocoop — the Ibero-American network of Wikimedian groups that has been organizing the Iberoconf events. Iberocoop is not only an association of neighbouring countries, but it is also sustained by sister languages and a shared culture. He adds: “The international community acknowledges that, and appreciates it. This also represents a challenge for us: to execute Wikimedia programs on a regional level.” The participating countries in Wiki Indaba also have regional similarities: Limitations in access to the Internet and the high use of mobile broadband are two common denominators faced by editors across Africa.

Your international conference doesn’t have to rely solely on PEG funds to become reality. A good example of that is Ada Camp 2014, an initiative that originally started as a big international meeting, and broke into smaller camp-like workshops in different countries. In their recently approved PEG proposal, organizers requested USD 11,480, but the total costs of hosting three camps went up to USD 129,453. The rest was funded by Google, Mozilla and Wikimedia Deutschland, among others.

Execute and measure: How did it go? What did you learn?

Once the conference is over, documenting its outcomes and outputs will help you prepare for your final report. Before parting ways, it is also key that participants know how to continue with the project, anywhere they go. Build up strong communication bonds and have a project coordinator to follow up with the outcomes of the conference. Perhaps the greatest service you can do your event participants after the event is to help them following up on ideas and initiatives discussed at the event.

The PEG grant report template has guidelines to help you showcase the conference experience. We recommend collecting feedback during and after the event through surveys to better understand participants’ experiences and discover where improvement is called for. A good example is the Wikimedia Conference 2014 Report, which summarizes participant demographics and impressions from the conference, including favorite sessions.

Good ideas end where they begin: plan how you will evaluate your actions in advance! Find resources and tools on the Evaluation portal to build your indicators of success and write an evaluation plan.