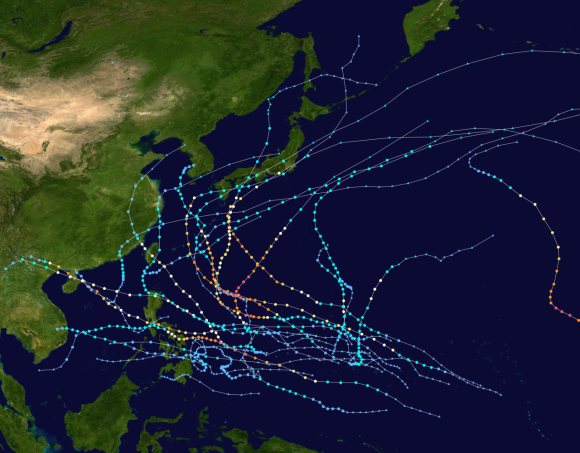 The 2014 Pacific typhoon season was one of the most edited articles on the English Wikipedia in 2014. By Keith Edkins, data from NASA/Joint Typhoon Warning Center. Public domain.

Wikipedia is the world’s largest free knowledge resource, but what makes it so unique is its dynamism — it is a living, breathing knowledge network that changes all the time, thanks to hundreds of thousands of editors around the world who keep it growing and current.

In 2014, volunteer editors created more than three million pages and made more than 100 million edits on Wikipedias across all languages. During this time, Wikipedia content was viewed around 250 billion times by nearly half a billion visitors worldwide. With its vast community of readers and contributors, Wikipedia content is a reflection of what much of the world experiences and considers significant.

The “#Edit2014” ‘year in review’ video showcased many Wikipedia articles that were highly edited in 2014. ou can also view the video on YouTube and on Vimeo. By Victor Grigas, Katherine Maher and others, CC-BY-SA-3.0.

Last month, the Wikimedia Foundation released its first-ever ‘year in review’ video showcasing some of these important moments: Wikipedia: #Edit2014. The video lets us revisit what the world read and edited last year, from the FIFA World Cup to the Indian general elections, and the Ice Bucket Challenge to Ebola in West Africa.

While the video presents a bird’s-eye view of the most popular topics on Wikipedia in 2014, you might wonder: how do these topics rank against each other? Researchers at the Wikimedia Foundation and in the broader Wikimedia movement have approached this question from a number of angles. Aaron Halfaker of the Wikimedia Foundation’s Analytics team recently identified the top 10 most edited pages on English-language Wikipedia in 2014. Many of the topics are to be expected, like Deaths in 2014 or the Israel-Gaza Conflict. Perhaps less expected are the Japanese dissidence during the Shōwa period or List of works by Eugène Guillaume. Both Malaysia Airline disasters are also reflected in the top ten.

Some of the pages on this list were created in 2014, while many had been created earlier but received a spike in edits in 2014. For example, the page on the Islamic State of Iraq and the Levant (ISIL) was started in January 2007. Between that time and 2013, however, only 595 edits were made as opposed to the 7,520 edits that were made to the page in 2014 alone. For more edit data on these and any other Wikipedia pages, click “View History” on any page and explore the External Tools including Revision History Statistics, Revision History Search, Edits by User, Number of Watchers, and Page View Statistics.

Brian identifies what he calls a “fascinating variance” around topics that attracted the most edits across the languages. In Brian’s words:

“the Arabic Wikipedia appears consumed with Cristiano Ronaldo and Real Madrid rather than current events while Russian Wikipedia is focused on the events in the Ukraine. There are likewise local topics that ‘Ilbe Storehouse’ 4chan-like website in Korean or the ‘Sunflower Student Movement’ in Chinese that will likely be omitted from most Anglophone year in review lists.”

Also in this post, Brian examines how many times a topic appeared in other languages. He uses this analysis to build a ranking of “widest language coverage for breaking news articles” in 2014. At the top of this list is the 2014 FIFA World Cup followed by Robin Williams and the two Malaysian Airline disasters: Malaysia Airlines Flight 370 and Malaysia Airlines Flight 17. Brian explores a number of other relationships: the complete findings can be found in his year in review post.

As the year draws to a close and we look back at the contributions of the Wikimedia community, we have all volunteer editors to thank for their commitment to making free knowledge available around the world. To see more of what the world edited in 2014, check out our first-ever annual video — Wikipedia: #Edit2014.