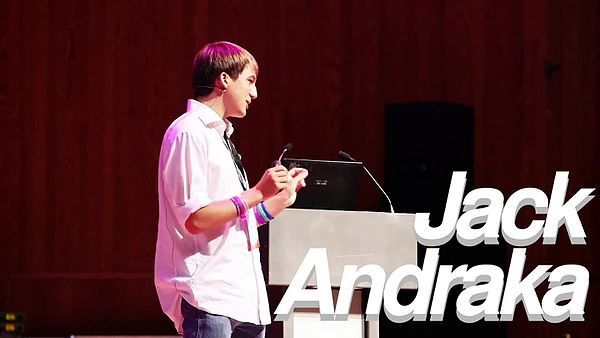 High school student Jack Andraka talks about how Wikipedia enabled his research to find a test for pancreatic cancer. You can also view this video on YouTube.com and Vimeo.com — or watch his full speech from Wikimania 2014 in London here.
Video by Victor Grigas, freely licensed under CC-BY-SA-3.0

When a close family friend passed away from pancreatic cancer, a 14-year-old American from Crownsville, Maryland named Jack Andraka wanted to find a better way of detecting the disease. Using the Internet and Wikipedia articles as a starting point for his research, the now 18-year-old high school senior became a cancer researcher who invented a fast, inexpensive test that may eventually be used to detect pancreatic, ovarian and lung cancer.

Andraka’s interest in science began when he was very young. His parents would show him experiments involving Diet Coke and Mentos, and how much weight egg shells could hold. As a sixth-grader, he says he started to consider Wikipedia as a research tool after a science fair in middle school.

“That’s really how I started to realize the breadth of science and just how cool it was that you could go anywhere in science and answer some question and help change the world. (…) And that to me was the coolest thing.”

After a family member died from pancreatic cancer, Andraka set out to find a cure to the disease.

“Once I discovered through Wikipedia articles that 85 percent of all pancreatic cancers are diagnosed late, when someone has less than a 2 percent chance of survival, and the current test is this 60-year-old technique that’s incredibly outdated, but also incredibly expensive ($800 per test), missing 30 percent of all cancers, I knew had to do something.” Andraka says.

Armed with a high school level biology education and what he calls “a crash course in molecular biology, material science and a couple of other fields” he set out to improve the current options for pancreatic cancer testing. “I essentially just used the Internet (especially Wikipedia) to get this crash course in all of these fields.”

Jack’s cancer research started online, and continued on for more than two years. He applied to about 200 laboratories and was summarily rejected from every lab — except one. After a lengthy interview process, Jack Andraka was accepted into working in a laboratory at Johns Hopkins University.

“I go in for this big interview clad in sweatpants and hoodie and they’re all dressed in suits of course and I’m feeling really awkward and out of place,” Andraka says. “And then they just throw all these questions at me trying to sink my procedure; I got through that.”

“The process for making these is pretty much akin to making chocolate chip cookies, which I personally love. (…) All you do is take some water, pour some nanotubes in, add some, like, antibodies, mix it up, take some paper, dip it, dry it, and you can detect cancer.”

Andraka likens the process to “something out of a Betty Crocker recipe,” and claims that the easy-to-make detector is extremely effective. According to Andraka, the sensor is 168 times faster, about 26 thousand times cheaper, and 400 times more sensitive than the standard detectors of pancreatic cancer. He claims that his test can detect some forms of cancer in their earliest stages when chances of a patient’s survival are close to 100 percent, and boasts a 90 percent accuracy rate in detection.

“So in the next two to five years, this sensor could lift the survival rates from 5.5 percent to close to a 100 percent for pancreatic cancer and would do similar for ovarian and lung cancers,” Andraka postulates.

“I set out on this wild adventure trying to find a new way to detect pancreatic cancer and that blossomed into me becoming a cancer researcher” Andraka says.

Often, research found in academic and scientific journals can only be accessed after the reader pays a fee. Such fees range from tens of dollars for a single article to several thousand dollars for a subscription. Andraka calls these paywalls “a tax on the curiosity and creativity of youth and the general public.”

“Because of this, a lot of young scientists simply can’t get access to articles they need to do science” Andraka says. He found himself relying on Wikipedia’s free content for his research, because there was no cost associated with access. “To read an article [on Wikipedia], you don’t have to pay a cent and there is no advertising or anything like that. So that’s why Wikipedia is such a crucial part of a young scientist’s career or even an established scientist’s career.”

At last year’s annual Wikimania convention, in London, England (where Andraka was a featured speaker), he opined, “Great ideas don’t only lend themselves to people who can afford articles, they lend themselves to everyone. Seven billion people now – not like a few million people who have PhDs. (…) Everyone can innovate and that’s what we should do with our dissemination of scientific knowledge.”

“For me, Wikipedia is one of the main reasons I was able to do this project because without that open access to information I would have never been able to get the background I needed to understand a lot of these scientific articles,” says Andraka.

Some have questioned Andraka’s research and his claims. His research has yet to be peer-reviewed, and it may take some time and many trials before the results of his research are fully understood and there is an approved test for pancreatic cancer based on Andraka’s work. Nevertheless, Jack Andraka has received a great deal of attention and celebration for his work. He became a 2012 recipient of the Gordon E. Moore award, the grand prize of the Intel International Science and Engineering Fair, and the Smithsonian American Ingenuity Youth Award. He frequently gives speeches about his research, including at the Clinton Global Initiative and TED. He has also been featured by several news sources such as BBC and 60 Minutes and he’s been the subject of short documentaries including “You Don’t Know Jack” and “Just Jack.”

The high school senior says his classmates were stunned by his research.

“They’re like, ‘What, the Jack Andraka, the kid who sat in the back of class reading physics textbooks, did all this stuff?’ (…) And it is kind of like a double life almost — I have a school life and my science career and speaking life.”

He says open access knowledge platforms like Wikipedia have inspired a lot of youth to discover and disseminate knowledge on their own.

“It’s really exciting to see all of these young people being interested in science and being pioneering through this open access. (…) Because without open access and Wikipedia, we certainly wouldn’t be able to do our research.”

Eventually the 18-year-old says he wants to help find the cure for cancer, and wants more scientific knowledge to be accessible to most people.

“People should definitely care about Wikipedia because it allows for almost a democratization of innovation. It allows anyone – regardless of where they are from, who they are, what they look like, it doesn’t matter – they can access that information and come up with a great idea”.