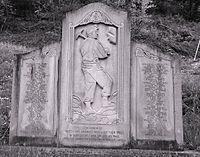 The city of War, West Virginia

Coal Scrip from Hot Coal West Virginia. When it was issued, coal scrip was used as a substitute for currency and could only be traded at company stores in the coal town of the company named on the scrip. 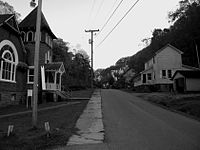 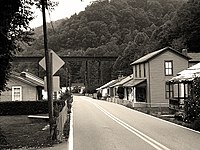 Many small towns scattered around the United States are virtually unknown to outsiders. To preserve their history, Mark Combs, also known by his Wikipedia handle Coal town guy, has started to document them on Wikipedia.
“My mom grew up in a really teeny, tiny small coal town in Raleigh County, West Virginia … You know most people when they go to a coal town, it’s by accident. So I wanted to start documenting them in a Wikipedia fashion you know, where is it a real place, what county is it in, where its geospatial coordinates is and et cetera. And I do it for the community, that’s a hobby.” says Combs.
For Combs, it was troublesome that these towns were being forgotten, even though they brought up fond memories for many people like him.
“In 2009 and 2010, a lot of the local landmarks were just sort of disappearing and it wasn’t by intent, it was really just the apathy in the area, the lack of — lack of jobs. And it really struck me that I kind of have, either I go out with my camera and take lots and lots of pictures – and not that somebody looks at them – or I have to start documenting things in an encyclopedic fashion.” Combs says. “And no one was really taking a uniform approach and worse yet, no one was really approaching these places with I guess not the respect it deserved, but rather the history that should be associated with them.”
“There are people I know from that place who were totally jazzed that you know their [town is on] Wikipedia. They felt a sense of recognition,” Combs says. “They’re just happy to know that somebody knows their town as a real place and that these are real people.”
Combs says he encountered townspeople who thought he was ridiculing them, but after several years they “loosened up” because they understood he was there to document the town from a historical perspective.
The idea of preserving small towns virtually came to him in 2002 (which Combs describes as “the dark ages of the Internet”), after working with some geospatial data that he had access to. “You could buy a GPS but it was not necessarily reliable and they were really expensive” says Combs. He tested the data that he collected, to see if he could identify small towns like the one his mother grew up in.
“I used my moms’ coal town name. It’s called Whitby. And I spelled it just like Whitby Lancashire in England. And everybody was telling me there’s no such place and that kind of peeved me off, because you know I was a kid, I played there. I used to go fossil hunting there and like it’s real, I know it was real.” says Combs. At the time, it took Combs two weeks to find his mother’s hometown.
Shortly after that experience, Combs drove to Whitby and starting taking photographs and interviewing people, and fell in love with researching and documenting small towns.
“Most people when they look at my preservation work, have no idea why I do it.” Combs says. “I take vacation time from work to drive to a coal town that hasn’t been inhabited for 25 or 30 years.”
In April 2010, Combs started a Facebook group called ‘I miss West Virginia Coal Towns‘. The group started with four members and today it boasts over nine thousand. And with more people in that group, Combs says they all learned more from each other. For instance, Combs would ask for help to identify a fact or a photograph and many people would join the conversation to weigh in on his question. They would then get even more photographs to identify from other users, and the knowledge pool would grow.
“We literally have thousands of photographs. Photographs I would think would’ve never existed, started showing up. Because some woman in Ohio went into her trunk and pulled out a picture of her aunt who stood in front of this building that hasn’t existed in 30 years. And suddenly a lot of people began contributing to knowledge in a way that I never thought possible. But the hard part was going through this pile of data and trying to find out what was real. What could be verified? And for Wikipedia it would almost be insurmountable. I mean you need five or six rows of supercomputers to say is this real or is this not real. But on the other hand if you don’t do that, it can’t grow.”
So far, Combs has created over 2,700 articles on Wikipedia. Many of them, including his mothers’ hometown of Whitby, can show their town’s history with images such as US postmarks on old postcards or coal scrip.
When asked if his work will have a legacy, Combs replied:
“I do not know if mine will. I really do not know. I think the only thing I want is for a few generations of people to be recognized as being just a place, that there was someone there – that people lived there, died there, worked there.”
Combs told us, “If you provide a place where only knowledge is acquired, verifiable, not hate speech, not opinions, but knowledge is acquired – then anybody can benefit.”
Profile by Yoona Ha, Communications Intern and Victor Grigas, Wikimedia Foundation Storyteller
Interview by Dan McSwain, Wikimedia Foundation contractor