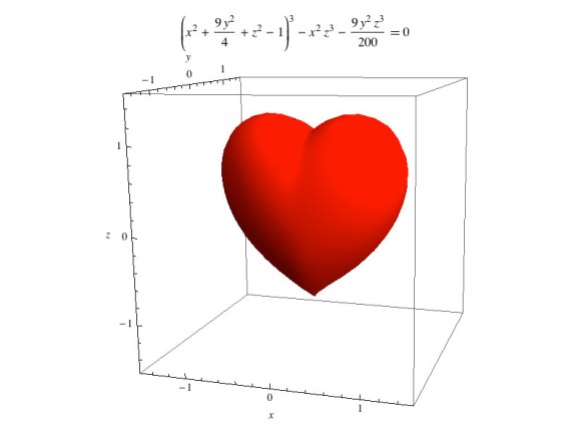 3D Love: This mathematically-defined heart shape is one of the many ways that love is represented on Wikimania sites. By Chiph588, CC0.
What do we know about love? What can we learn from Wikipedia and its sister sites?
For Valentine’s Day, we asked Wikimedians to share their favorite articles or images about love, from Wikipedia and sister projects.
Together, we collected a wide range of insightful articles, images, videos, sounds, quotes and websites on the many different ways this topic is represented in our wikis: from platonic to fraternal, divine or romantic love.
Here are some of our favorites, based on over 77 community recommendations, shared via email, social media and on Wikimedia sites this week.

Good introduction to the many types of love, and how they vary between cultures and viewpoints. This article is well-written, factual, and nuanced, with helpful context. Did you know that a core concept of Confucianism is Ren (“benevolent love”, 仁), which focuses on duty, action and attitude in a relationship, rather than love itself?
Suggested by Karam Wajeeh Abutabaq (Facebook). Romeo and Juliet painting by Frank Dicksee, public domain.

A well-researched overview of Valentine’s Day, how this holiday came about, and how it is celebrated in many world regions. Did you know that Saint Valentine marks the beginning of spring in some cultures? that some Islamic countries ban the sale of Valentine’s Day items?
Suggested by Fabrice Florin (WMF). Antique Valentine’s Day card is public domain.

This article describes the ethic of reciprocity behind by this maxim: “Treat others as one would like them to treat you.” Community member Lotje chose it because “you can pick in any language or religion,” and supporter Anika adds it can be practiced both “on-wiki and off-wiki.”
Suggested by Lotje. Golden rule image by Bernard d’Agesci, public domain.

Pārvatī is the Hindu goddess of love, fertility and devotion. She represents the gentle and nurturing aspect of Hindu goddess Shakti. Community member Wyatt Brown adds: “Lord Shiva and his Parvati companion have been doing some pretty epic stuff together, for a very long time.  :)”
Suggested by Wyatt Brown (Google+). Picture of Shiva and Parvati is public domain.

Love tester machines like this vintage model rate the subject’s sex appeal, love abilities or romantic feelings. A quirky, but popular recommendation.
Suggested by Secretlondon. Photo by Piotrus, from Musée Mécanique, CC BY-SA 3.0.
For more articles about love, visit ‘Love on the Wikis’. 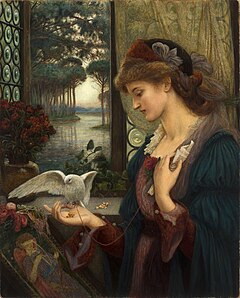 Smallbones writes: “‘Love’s Messenger‘ is a wonderful painting I found and uploaded three years ago in February while working with a previously unknown colleague on a series of articles on Pre-Raphaelite paintings. She was absolutely wonderful in helping me work through the series. (…) Finding a colleague like this is the greatest pleasure that I have working on Wikipedia. (…) Even though we still haven’t met, and there is no romantic love between us, this is my “love letter” to P., and to all my great colleagues on Wikipedia.”
Suggested by Smallbones. Painting by Marie Spartali Stillman, public domain.
Mother and child 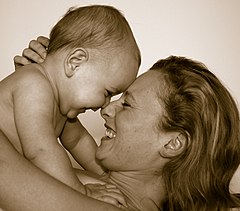 A mother and child look at each other.
Suggested by Pine (see his ‘Feel the love‘ gallery). Photo by Robert Whitehead, via Flickr, licensed under  CC-BY-2.0.
Lovers with doves 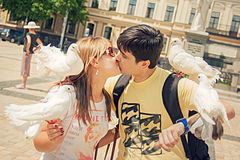 Lovers with doves kiss in Kiev, Ukraine.
Suggested by Pine. Photo by Juanedc, via Flickr, licensed under  CC-BY-2.0.
Sappho and Erinna 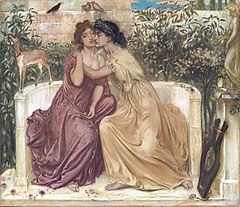 Sappho and Erinna in a garden at Mytilene, Greece.
Suggested by Pine. Painting by Simeon Solomon, public domain.
IKEA Gets Queered with Russian Kiss-In

Two men kiss in IKEA, during a protest against Russian censorship of an IKEA catalog that included a lesbian couple.
Suggested by Fæ. Photo by Sasha Kargaltsev, via Flickr, licensed under  CC-BY-2.0.
Tenderness 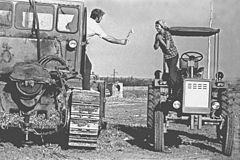 Love amongst the Moldovan peasantry, from a 1972 documentary from Grigoriopol, Malaiesti, Romania.
Suggested by Secretlondon. Photo by Ion Chibzii, via Flickr, licensed under  CC-BY-2.0.
Kissing prairie dogs 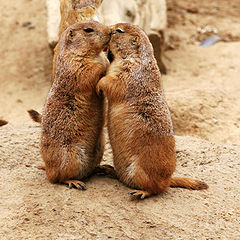 Two black-tailed prairie dogs appear to be kissing. “Birds do it, bees do it … why not prairie dogs?”, says the person who recommended this image.
Recommended by: 98.114.44.226. Photo by Brocken Inaglory, CC-BY-SA-3.0
For more images about love, visit ‘Love on the Wikis’. 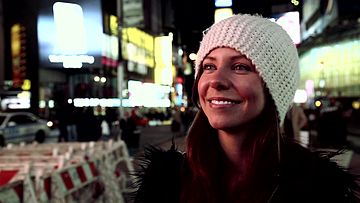 Created as a ‘Valentine from Wikipedia’, this video documents the creation of an article about the ‘Love Dart’ — along with candid reactions from people on the street. Did you know that some snails and slugs make a little arrow (or ‘love dart’) inside their bodies before mating? Wikipedia editor Susan Hewitt thinks this may have been the origin of Cupid’s arrow.
Suggested by Michael Guss. Video by Victor Grigas (WMF), licensed under CC-BY-SA 3.0. View it on YouTube.

Why Change Your Wife?

American silent film directed by Cecil B. DeMille (1920). As described on Wikipedia, this 90-minute romantic comedy tells the story of Robert and Beth Gordon, who are married but share little. He runs into a young woman at a cabaret — and the Gordons are soon divorced. Over time, they are drawn back to each other — and they fall in love again. The end title claims that “a man would rather have his wife as a sweetheart than any other woman”: it invites women to always look their best and “learn when to forget that you’re his wife.”
Suggested by Geni. Film by Cecil B. DeMille is public domain. (Note this file may not play well on some browsers.)

Wikilove – The Encyclopedia of Love

Wikilove is a project dedicated to emotional bonds and love rituals. Founder Alexis de Maud’huy says the main idea of Wikilove is to “educate about emotional intelligence.” Did you know that he first created this project as a wedding gift to his wife? It has now grown to nearly a million pages and has become a valuable resource about emotional issues.
Suggested by Keegan (WMF) and Jessica Robell.

A wonderful gallery of love images on the Signpost, created in response to our call for wiki content on this topic. Its creator, Pine, writes: “If anyone felt that there was too little love in Wikimedia, I hope that this gallery will change their minds!” Thanks, Pine, we feel the love, and it is much appreciated. 🙂
Suggested by Fabrice Florin (WMF).

A rich collection of quotable statements about love. You can pick quotes in any language, on a wide variety of emotional states related to love.
Suggested by Nemo.
Speaking of quotes, we end this roundup with Shakespeare’s own inspiring sonnet about Valentines day, from Hamlet:
To-morrow is Saint Valentine’s day,
All in the morning betime,
And I a maid at your window,
To be your Valentine.
Then up he rose, and donn’d his clothes,
And dupp’d the chamber-door;
Let in the maid, that out a maid
Never departed more.
—William Shakespeare, Hamlet, Act IV, Scene 5
For more community recommendations about love, visit ‘Love on the Wikis’.

Thanks for sharing the love!

Thanks to everyone who contributed to this great community-created love collection!
We are particularly grateful to Pine, Nemo, Fae and Geni, some of our most active participants, for their helpful contributions. Many thanks as well to all the folks who shared their suggestions on Facebook, Twitter and Google +.
Your collective suggestions broadened our perspectives about love, in all of its forms. Together, we found some really well-written, factual and nuanced articles, as well as many humorous, dramatic or beautiful images, which gave us a better understanding about love and why it matters.
What do you think about this curation experiment? Did you learn anything new? Should we do it again? If so, what themes should we focus on next? Please chime in the comments below with your ideas and suggestions. We hope that collaborations like these can help us discover new ways to share useful information, combining the wikis, our blog and social media.
Thanks again for sharing the love — and happy Valentine’s Day to all Wikimedians!
Fabrice Florin – Movement Communications Manager, Wikimedia Foundation
in collaboration with many gracious community volunteers, as well as:
Victor Grigas – Storyteller, Wikimedia Foundation
Michael Guss – Research Analyst and Social Media Maven, Wikimedia Foundation
and the Wikimedia Foundation’s Communications team.