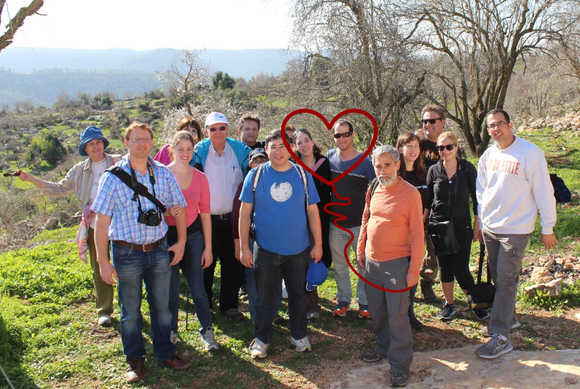 Avner and Darya fell in love while touring Israel with other Wikipedians. Here they are at Mount Eitan. Photo by Deror Avi, freely licensed under CC-BY-SA 4.0

On Wikipedia’s 14th birthday, Avner proposed to me. It seemed very natural, as we both feel that Wikipedia’s community is family.

Avner and Darya first met at a Wikimedia Israel Meetup.

I remember meeting Avner for the first time at a Wikimedia Meetup with volunteers, hosted at the Wikimedia Israel office by Jan-Bart de Vreede, chair of the Wikimedia Foundation’s Board of Trustees. Wiki-Academy had just successfully completed its 6th conference and everyone was in good spirits. Avner came in late. He knew everyone in the room, except for a girl in a red who caught his eye.

Avner asked around and learned that I was the Wikipedian in Residence at the National Library of Israel. So naturally, the next time he saw me at the library, he started a conversation. The first thing we talked about was a recent complaint the Library’s Reference Desk in Wikipedia had received. He was unaware that I was in charge of the Reference Desk and that I wasn’t very happy being criticized. So we kept our distance during the Hebrew Wikipedia birthday that summer.

Avner and Darya at the Hebrew Wikipedia’s 11th Birthday.

Not ready to give up hope, Avner wrote to me and we started corresponding. Soon after, we went out and in no time we realized this was the real thing! As we are both Wikipedians, we got involved together in many of the chapters’ activities, including Elef Millim, a ‘thousand words’ tour of Israeli landmarks (see photo above).

Finally, Avner decided it was time. He thought it over very carefully, I didn’t realize a thing. On Wikipedia’s 14th birthday, organized by Wikimedia Israel, Avner was to give a lecture titled “How to find love in Wikipedia and what do Wikipedians do when they are in love.” It was supposed to be a theoretical lecture on couples in Wikipedia. He even invited my brother to the lecture: I still didn’t figure out that something was up.

The lecture started, Avner spoke about how he begun writing in Wikipedia and how we met. Not exactly a theoretical lecture. :) Then, his last piece of advice for finding love was to dedicate an article for your beloved. He dedicated an entry of a well-known poem by Natan Alterman called ‘Eternal Meeting’. He then read a verse from that poem, looking straight at me, his voice trembling a bit:

Avner and Darya kiss after his proposal.

Then Avner took out a ring. We embraced. I put the ring on my finger and we kissed, while the audience applauded. We were greeted with so much love from the Wikipedia community! We are incredibly happy to be able to share this moment with everyone. It was perfect!

Wikipedia is our passion. Naturally, we will be celebrating our honeymoon at Wikimania 2015!

All photos in this article by Deror Avi, freely licensed under CC-BY-SA 4.0