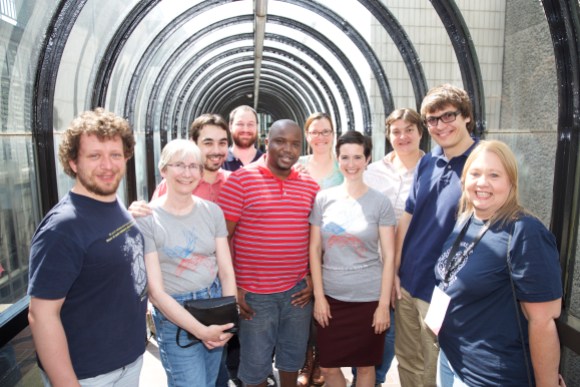 Participatory grantmaking works because of committees such as this one. These community members review proposals for funding and help decide what to fund. Photo by Adam Novak, CC-BY-SA-3.0.
Because of Wikipedia’s unique structure, the grantmaking conducted by the Wikimedia Foundation (WMF) must be infused with the same spirit of collaboration, transparency, and participation that underpins the entire Wikimedia project. A new report published by The Lafayette Practice, and commissioned by WMF, provides the first in-depth insight into the Foundation’s grantmaking practices and reveals some interesting findings about our particular model.
As authors of “Who Decides?: How Participatory Grantmaking Benefits Donors, Communities and Movements,” The Lafayette Practice (TLP)  found that Participatory Grantmaking (1) is a powerful movement-building strategy that leads to efficient transfer of money, knowledge and the promotion of self-determination. The idea behind this practice is to include representatives from the population that the funding will serve in the grantmaking process and in decisions about how funds are allocated.
The report found that the Wikimedia Foundation is the largest known Participatory Grantmaking Fund, through grants that support our communities and the movement more broadly. WMF’s total grants exceed all of the other funds documented in The Lafayette Practice’s original “Who Decides” report. In that study, the highest documented grantmaker budget was $2.37 million in 2012. WMF’s grantmaking budget for 2014-15 is over $7 million.

Central to the findings of this study is that our grantmaking processes and practices reflect the core ethos, mission, and model of Wikipedia and Wikimedia projects. In the same way that Wikipedia articles are born and grown on a public platform through the collaboration of a global community, so too are our grant proposals workshopped and reviewed on public wikis, as well as improved by volunteer editors.
Our four grantmaking programs have differing degrees of participation, where decisions are made in cooperation with volunteer committee members, Board members, WMF staff — and with input from the larger community.  The committees behind these grantmaking programs — the Grant Advisory Committee, the Funds Dissemination Committee, and the Individual Engagement Grants Committee — are an incredible and diverse group of community members who engage in the tough work of reviewing proposals for funding and helping to make decisions about what to fund with limited resources available. It’s certainly no easy task.
The report also found that the Foundation’s grantmaking program has the largest peer-review participation of any funder of this kind, with many diverse community members from around the world involved in the decision-making committees. And in the same way that anyone can become a Wikipedia editor, anyone who edits Wikipedia can submit a proposal to the Wikimedia Foundation.
We agree with the Lafayette Practice’s assessment that our grantmaking is “innovative and groundbreaking” and we believe passionately in the participatory nature of our work.
Ultimately, the Wikimedia movement’s deeply ingrained values of collaboration, transparency and expanding access to information are reflected not only on the projects, but are also central to the way funds are allocated — and the way we support our community in sharing free knowledge with the world.
By Katy Love, Senior Program Officer, Wikimedia Foundation
This blog has been updated with a new title, replacing “Research” with “Report.” This update reflects that this report was commissioned by the Wikimedia Foundation, as is clear from the first paragraph. We have also added a footnote about the Wikipedia article on Participatory Grantmaking.
(1) The Wikipedia article on Participatory Grantmaking was written primarily by Wikimedia Foundation staff in their capacity as Wikimedia volunteer editors. This was done on their own time, using their personal editor accounts, with the intent to share information with the larger philanthropic sector about a practice that is very much aligned with wikiculture. The article, which meets Wikipedia policies and guidelines, was developed based largely (but not exclusively) on the original report by the Lafayette Practice about participatory grantmaking, which was not funded by WMF. The study cited in the article did not include the Wikimedia Foundation. The subsequent report about the WMF’s participatory grantmaking approach was commissioned by Foundation in the months following the original report and is not referenced in any version of the Wikipedia article.