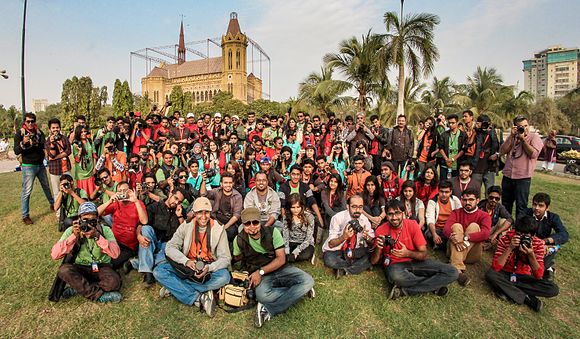 Some Wikipedia readers in Pakistan have become active contributors, as featured in this group portrait from the 2013 Karachi Photo Walk. Karachi Walkers by Azlan Khan, CC BY-SA 4.0
Wikipedia is one of the most popular websites in Pakistan, with millions of Pakistani Internet users accessing the site every month. But despite the site’s popularity, topics related to Pakistan seem to be seriously under­-represented in the encyclopedia and few Pakistanis are contributing to their encyclopedia. To better understand Pakistani readers and their relationship with Wikipedia — and to learn why they do not contribute back to it, I conducted an online survey of Wikipedia readers for the very first time in Pakistan, in consultation with the Wikimedia Foundation’s Learning and Evaluation team.
The purpose of this online survey was to gather demographic data about our Wikipedia readers, to get their opinions about the site, to learn about their editing behavior and to understand their device ecology. The exploratory survey was conducted for Urdu and English Wikipedia and was enabled for anyone reading a Wikipedia page on a desktop computer in Pakistan. It was available for about 48 hours between November 9 and November 11 in 2014. From the 7,000 individuals who opened the survey, 5,376 respondents completed at least 70% of the survey. The numbers we present below are only a summary of the responses for each question, and each question should be read as a standalone question.
Survey results suggest that 56% (3,460 out of 6,192) Wikipedia readers from Pakistan visit the site at least once a day. (It’s worth noting that Pakistan only represents about 0.3% of worldwide traffic to Wikipedia — or an average of 28 million page views from Pakistan — compared to about 18 billion page views per month worldwide, from nearly 500 million monthly unique visitors.) And yet, about two thirds of respondents realize that Wikipedia is a non-profit project (only 32% responded “No” when asked if they knew Wikipedia is non-profit).
About 87% of survey respondents from Pakistan identified themselves as male, while only 11% identified as female (6,698 responded to the question). This seems to correspond to a recent global south analysis, which identified a large gender gap in Wikipedia, whose readers and editors tend to be predominantly male.
In Pakistan, Wikipedia seems to attract younger readers than in western countries, based on 6,723 age-related responses:
• 37% (2,490) reported being between 21 and 25 years old;
• 21% (1,427) between 16 and 20 years old;
• 17% (1,149) between 26 and 30 years old.
About 6,650 respondents answered the question about employment:
• 47% (3,131) reported that they are students;
• 27% (1,799) are employed for wages;
• 12% (785) are self-employed;
• 7% (446) are either out of work or looking for work.
About 6,636 people responded about their level of education:
• 33% (2,202) reported having a Bachelors degree;
• 20% (1,347) said they have a masters degree;
• 14% (939) said they completed a secondary education.
(For this question, respondents could only select one option.)
When asked about their main reasons for using or reading Wikipedia, about 6,182 who answered that question:
• 69% (4,257) selected “for information and knowledge”;
• 67% (4,178) selected “for study and research”;
• 52% (3,226) selected “for personal curiosity and interest”;
• 22% (1,348) selected “for fun or hobby”;
• 22% (1,340) selected “for work.”
According to the survey, 97% of respondents (5,976 out of 6,156) find Wikipedia mostly useful or somewhat useful. Out of 6,099 respondents, 77% (4,694) rated the overall quality of Pakistani topics on English Wikipedia as good or very good. (In my own observations, coverage of Pakistani topics seems to be low-quality — and this might be related to low number of editors from Pakistan.) Only 4% (254) rated the quality of Pakistani topics on English Wikipedia as poor or very poor, while the remaining 19% (1,151) rated it as of fair quality. 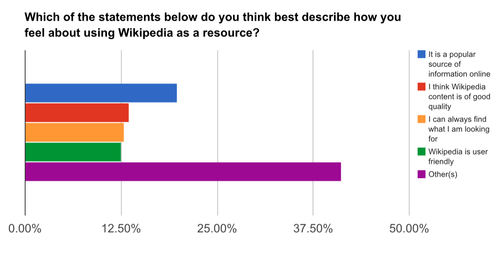 Responses on how they feel about using Wikipedia as a resource included:
• 63% (3,894) selected ‘Wikipedia is a popular source of information’;
• 43% (2,650) picked ‘Wikipedia has good quality content’;
• 41% (2,541) responded that they ‘always find what they are looking for’;
• 40% (2,463) thought that ‘Wikipedia is user friendly’;
• 37% (2,295) said that they ‘trust Wikipedia’;
• 30% (1,828) chose ‘Wikipedia articles are most up-to-date’.
(Respondents were able to select more than one option.)
Wikipedia is multilingual and available in 285+ languages, including in Pakistani languages such as Urdu, Punjabi, Sindhi and Pashto. But a large majority of Wikipedia readers from Pakistan read and edit the English edition of Wikipedia. When asked whether they are aware of the existence of Wikipedia in Pakistani languages, about 6,071 respondents responded: 38% (2,320) said they unaware of these language editions, while 47% (2,835) said they’re aware of them but they only use English edition. About 849 responded to a question about whether they use non-English Pakistani language editions: 92% (784) said they use Urdu Wikipedia and 17% (144) use Punjabi Wikipedia. When asked how often they use non-English Wikipedia editions, 38% (320 out of 845) said they use Wikipedia in a non-English Pakistani language less than once per month. But at the same time, 49% of respondents (2907 out of 5,904) said it is “important” or “very important” to have Wikipedia articles available in Pakistani languages.
When asked what other media they used, about 6,137 responded:
• 22% (2,017) said they read at least once per day;
• 26% (1,598) said they read Pakistani newspapers online less than once a month.
Of the more than 2.9 million monthly total edits to the English language edition of Wikipedia from across the globe, only about 7,000 – or roughly 0.5% – are from Pakistan. The survey found that about 18% of respondents didn’t know that anyone can make an edit (1,073 of 5,895), whereas 61% (3,580) said they’re aware of it, but they never edit. Only 6% (364) said that they edited Wikipedia recently, and 15% (877) said they have previously edited Wikipedia, but not recently.

About 1,184 respondents answered a question about their reasons for currently editing or editing in the past:
• 63% (735) said that they like the idea of sharing knowledge;
• 55% (654) said that they saw an error and wanted to fix it;
• 37% (432) said they believe that information should be freely available to everyone in the world;
• 21% (249) said they like the Wikipedia’s philosophy of openness and collaboration.
From the 4,737 who said they have mobile phones, 55% (2,593) said they never or rarely found data charges to be an obstacle for them to access the site, while the other 45% (2,144) found data charges to be an obstacle at least some of the time. When asked if they would change their use of Wikipedia if access to Wikipedia were free, 68% (3,260 out of 4,792) reported this would increase or greatly increase their use of Wikipedia.
While these numbers are very preliminary, they offer some useful information about who is reading and using Wikipedia in Pakistan and how they are gaining access to Wikipedia. We hope you find these findings helpful.
Saqib Qayyum, Wikimedia Pakistan
Graphs by Saqib Qayyum, freely licensed under CC BY-SA 4.0