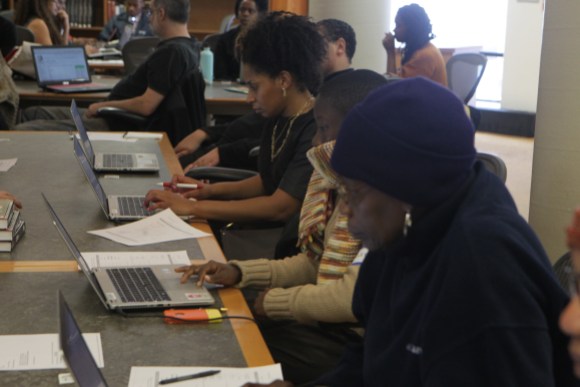 For Black History Month, many new Wikipedia articles about black culture were created in edit-a-thons across the United States, such as this at the “BlackLivesMatter” event at the Schomburg Center in New York City. Photo by Terrence Jennings, under CC BY-SA 4.0

Black History Month is celebrated annually in the United States in February, to commemorate the history of the African diaspora. For this occasion, Wikipedians worked together to honor black history and to address Wikipedia’s multicultural gaps in the encyclopedia, hosting Wikipedia edit-a-thons throughout the United States, from February 1 to 28, 2015.

Maira Liriano, one of the key institutional organizers of the #BlackLives Matter Edit-a-thon in New York, summarized the goals of this project to reporters, as reported on Innovation Trail: “There is a bias and a lack of people of color involved in creating Wikipedia and many subjects are also missing from Wikipedia. So events like today are in part to make people aware of that and then to empower them and give them the information they need to correct that bias.”

Libraries proved to be ideal places for these edit-a-thons. At the Aaron Douglas Reading Room, librarians located reference texts and provided suggestions for further research. A list of Wikipedia articles to edit and create was prepared for the Schomburg Center Edit-a-thon and used by many of the satellite events.

The #BlackLivesMatter Edit-a-thon at the Schomburg Center was organized in collaboration with NYPL, the Metropolitan New York Library Council, Wikimedia NYC, Wireless Harlem, and the West Harlem Art Fund for the Black WikiHistory Month outreach campaign.

Over 50 experienced and beginning Wikipedians attended throughout the day, and almost every seat was filled.

The New York Edit-a-thon was an overwhelming success, which led to the creation of 19 new Wikipedia articles, including: 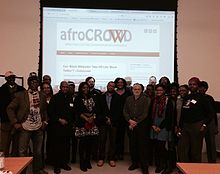 On February 7th and 8th in Brooklyn, kickoff events took place for a new initiative, the Afro Free Culture Crowdsourcing Wikimedia (AfroCROWD), which seeks to increase the number of people of African descent who actively partake in the Wikimedia and free knowledge, culture and software movements. The workshops were open to all Afrodescendants, including but not limited to individuals who self-identify as African, African-American, Afro-Latino, Biracial, Black, Black-American, Caribbean, Garifuna, Haitian or West Indian.

Events were held at the Brooklyn Public Library. Wikipedia trainings and overviews were given in some of the many languages spoken by our target population: French, Garifuna, Haitian Kreyòl, Igbo, Yoruba, Spanish and Twi. Affiliate project pages such as WikiProject Haiti were also introduced — and organizers announced the new Garifuna language Wikipedia incubator, the fruit of a collaboration between AfroCROWD and Wikimedia NYC.

Afrocrowd’s next 3 events will be HaitiCROWD on 3/14, AfricaCROWD on 4/4 and AfrolatinoCROWD on 4/12. HaitiCROWD will focus on resources in the Haitian Kreyòl, French and English Wikipedias, as well as growing the Haitian Wikipedia, which is now available free of charge to many Haitians in Haiti through the Digicel/Wikimedia Foundation Wikipedia Zero initiative. The workshop series will culminate in an edit-a-thon on June 20th at the Brooklyn Public Library.

Here is a visual recap of the AfroCROWD kickoff event.

Three Black History Month events were held in Washington D.C.; one at Howard University on February 19th, as well as the STEM Heroes Edit-a-thon at the White House (learn more) and another one the National Public Radio (NPR) headquarters on Tuesday, February 24th.

The Howard University event led to the following additions to Wikipedia: 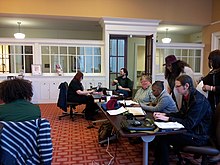 The Nashville Public Library held “Our Story Matters Wikipedia Edit-a-thon” on Saturday February 7th. This was the first Editathon at Nashville Public Library and 11 enthusiastic editors attended, including 8 new users. Participants worked on these articles; African Americans in Tennessee and Callie House. Several articles were in the draft stage when the program ended, but will hopefully be completed soon.

We wish to thank all participants who made these edit-a-thons possible! It’s really exciting to see so many new editors join forces to help fill the multicultural gaps in Wikipedia — and to honor black history together.

This blog post was updated on Feb. 25 to include information about the First STEM Leaders Edit-a-thon at the White House, as well as update photos.