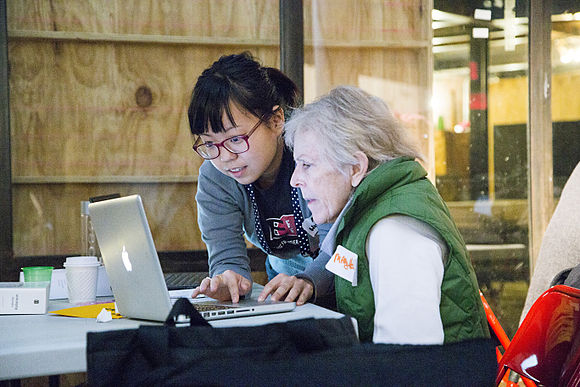 Women contributors collaborate to edit Wikipedia in an Art+Feminism Edit-a-thon in New York City. Events like these help increase gender diversity on Wikimedia projects. Photo by Michael Mandiberg, freely licensed under CC-BY-SA 3.0.
To improve coverage of women and the arts on Wikipedia, over 75 different edit-a-thons will be held around the world, on the weekend of International Women’s Day, March 7th and March 8th.

The Art+Feminism Campaign, based in New York, is organizing a global effort to host Wikipedia edit-a-thons this weekend, as we did last year.
The main event will take place at the Dorothy and Lewis B. Cullman Education and Research Building at the Museum of Modern Art in Manhattan, on Saturday, March 7, 2015 for a day of communal updating of Wikipedia entries on subjects related to art and feminism. We will provide tutorials for the beginner Wikipedian, reference materials, childcare, and refreshments. Bring your laptop, power cord and ideas for entries that need updating or creation. Even if you are averse to editing, we urge you to stop by to show your support.
A simultaneous event will be held at the Elizabeth A. Sackler Center for Feminist Art at the Brooklyn Museum — and over 75 other edit-a-thons nodes around the world will also invite participants to contribute to Wikipedia during International Women’s Day weekend.

Event nodes are being organized on March 7th and 8th throughout the U.S., Canada, Europe, Oceania, South America — and online.

To guide participants, Art+Feminism provides a growing list of possible tasks for these edit-a-thons. For more information, see the Art+Feminism Campaign page. 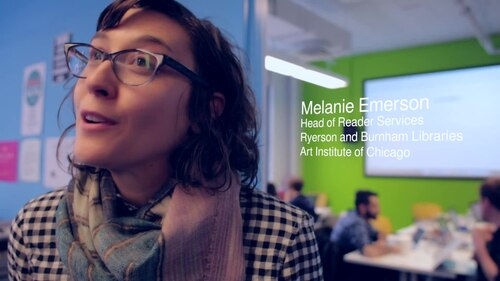 Watch this video of the Art+Feminism 2014 Edit-a-thon in Chicago. You can also view it on YouTube. By Victor Grigas, freely licensed under CC-BY-SA-3.0

In February 2014, an Art + Feminism edit-athon took place at Eyebeam Art and Technology Center in New York City. More than 30 event nodes were hosted in Australia, Canada, Italy, the Netherlands, the United Kingdom and the United States. The campaign attracted an estimated 600 participants, resulting in more than 100 new Wikipedia articles focused on women and the arts. Read more outcomes from that event.

Wikipedia’s gender diversity issues are well documented. A 2010 survey conducted by the United Nations University found that only 13% of Wikipedia contributors identify as female. The reasons for the gender gap are up for debate: suggestions include leisure inequality, how gender socialization shapes public comportment, and the contentious nature of Wikipedia’s talk pages. The practical effect of this disparity, however, is not. Content is skewed by the lack of female participation. Many articles on notable women in history and art are absent on Wikipedia. This represents an alarming challenge for an increasingly important repository of shared knowledge.
To address theses issues, Art+Feminism and related projects invite you to join us this weekend — and help increase gender diversity on Wikimedia sites.
Siân Evans, Librarian and Implementation Manager, Artstor, Art Libraries Society of North America’s Women and Art Special Interest Group
Jacqueline Mabey, Independent Curator and Art Worker, failed projects
Michael Mandiberg, Associate Professor-CUNY Graduate Center and College of Staten Island/City University of New York, Education Program Teacher