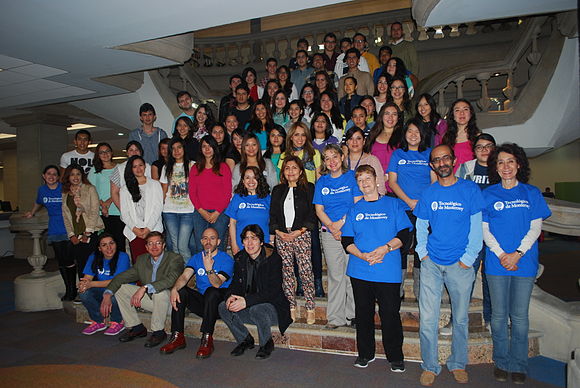 Students and teachers participate in the a massive three-day edit-a-thon at Tec de Monterrey, Campus Ciudad de Mèxico. Photo by Thelmadatter, freely licensed under CC BY-SA 4.0.
Tec de Monterrey‘s Education Program (Wiki Learning) held a massive three-day edit-a-thon on three campuses, from March 4 to 6, 2015. Called Experiencias Retadoras (in English: challenging experiences), this edit-a-thon was part of a larger event called Espacios de Innovación (in English: Innovation Spaces): this is a one-week period each semester, when classes are suspended so that students and staff can work on technology-focused educational projects, called retos (in English: challenges), with a focus on challenges with social impact.

Working with Wikipedia was one of the options selected for this first semester’s Espacios de Innovación at three of Tec de Monterrey’s 31 campuses: Campus Ciudad de México, Campus Santa Fe and Campus Estado de México, all in the Mexico City metropolitan area. Wikipedia was chosen because of its global reach and openness to new participants — as well as for the challenge of creating content that is published, reviewed, and read worldwide. The main aim of this semester was to explore working with Wikipedia with as many students and staff as possible, focusing on “simpler” tasks and navigating not only the technology but also community norms and practices. Each campus developed their own activities, with support from Wiki Learning coordinators, Leigh Thelmadatter, Lourdes Epstein and Paola Ricaurte. Beginning in January, teacher training workshops were offered as well as editing workshops for students of the Ciudad de México campus, all of whom who were encouraged to translate short articles (mostly from English into Spanish, but there were also translations into French and even one into Finnish) as part of their classwork so that as many students as possible had some practice with editing Wikipedia before the event.
There were a variety of activities for participants in the edit-a-thon, including writing articles, translating articles, reviewing articles, uploading media, and captioning media. In addition to developing and translating new articles, students were also reviewing and correcting them for each other. Other students were taking and uploading new photographs, uploading videos and animations, improving and translating descriptions of existing media files on Commons, uploading and documenting 27 radio episodes from the series “Shot Informativo,” a joint project between the Tec de Monterrey’s campus radio (Concepto Radial) and Radio Netherlands, which were donated to Commons by the campus radio station. Two other innovative activities involved a local WikiExpedition where a group of foreign students from Campus Ciudad de Mexico documented a historical site and a photography project at Campus Estado de Mexico created images related to social issues in Mexico. One photo from this activity was picked up within three days of being uploaded to Commons and was published in Science Times magazine here. More information about these projects is available in the Education Newsletter here.

Some of the articles that were created and improved were those related to the Festival Internacional Cervantino, in collaboration with Mexico’s National Council for Culture and Arts (Conaculta), which sent two representatives to the event, Georgina Hughes Montaño and Talía Guraieb Carrillo. Also in attendance at the edit-a-thon was Wikipedia Education Program Manager Anna Koval. Anna gave motivational talks at all of the campuses, gave an interview on campus radio, assisted students and staff with editing and demonstrated VisualEditor, and delivered the opening remarks (see photos here). Anna said, “According to stats.wikimedia.org, Spanish is the 10th largest Wikipedia by article count. And Mexico has the largest number of readers of Spanish Wikipedia. There are more than 400 million Spanish speakers worldwide. And more than 20 million of them live in Mexico City. That means there is tremendous potential for impact from this country, this city, and this education program. And that is why an event like this is so monumental and why this school is so special.”
WikiMetrics shows impressive impacts from this event: 311 students and teachers worked hard during the event (see the event page for additional statistics). 97 articles were translated, 79 articles were revised and corrected (including the number of articles written or translated by edit-a-thon participants), 45 articles were created or expanded with new information, 27 radio broadcasts were uploaded, and 2 animations were contributed. Naomi Iwadare Akachi, a digital animation major, created a hamstring animation and a quadricep animation in her Servicio Social class and released the gifs under a free license during the editathon; these files can now be used to illustrate medical articles on Wikipedia in any language. Students also worked on summaries of and later transcripts for those files, along with 307 photos and 6 videos, including those from the first academic WikiExpedition to Tepoztlan and a series of files related to social issues. In total, 1,315,324 bytes were added to the article namespace on Spanish Wikipedia.

Day 1 of the edit-a-thon in the library at Tec de Monterrey, Campus Ciudad de México. Photo by Thelmadatter, CC BY-SA 4.0.

Several students commented on the impact of this event for them personally. María José Felgueres Planells, is a biotechnology major enrolled in the Servicio Social class at Campus Ciudad de Mexico. She noted that writing Wikipedia articles for community service is not easier than other participation options available to students completing their mandatory 480 hours of service, and, in fact, it is much harder because they must “read and translate terms and understand and learn.” However, she added, “It helps me grow my knowledge and spread knowledge. It is also very attractive to rehearse my English and improve my grammar and spelling in both English and Spanish.” Pamela Varillas Urquiza, also a Servicio Social student, stated her reason for completing her service by writing articles on Wikipedia: “If you are really interested in something, you can find more information about it English than in Spanish. That’s why it feels like I’m giving back to my community.”
This edit-a-thon was not the end of the story, as students continue editing and creating new articles at campus Ciudad de México. They are now editing articles related to the Festival Cervantino in Spanish and English, as well as reviewing translated articles by Spanish language writing classes. Valuable lessons were learned from this experience, such as the need to organize projects geared towards smaller groups, with thematic focus, and the need for additional support from instructors and others with significant experience in Wikipedia to both plan the activities and help students execute them. One other lesson learned was the need to plan wiki activities farther in advance, and that is happening now. Preparations for the September 2015 Experiencias Retadoras are already underway. All in all, this event was a challenge, nevertheless, it was an important educational opportunity for students and staff alike as well as an innovation in the global Education Program. This pilot project was one of the largest educational edit-a-thons to date. Learn more about the education program at Tec de Monterrey on Outreach wiki. Have a look at the results on Spanish Wikipedia and see the photos on Wikimedia Commons.
Leigh Thelmadatter, Tec de Monterrey Wiki Learning coordinator
Anna Koval, Wikipedia Education Program, Wikimedia Foundation