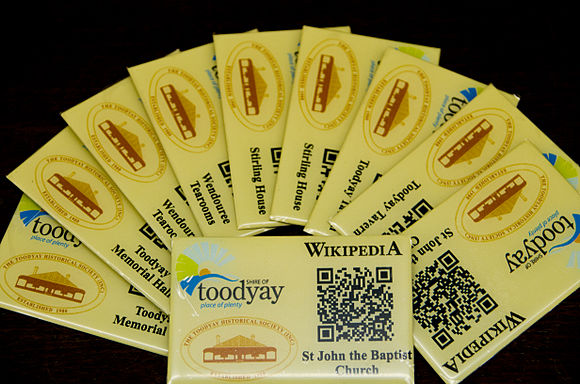 Visitors to the small town of Toodyay in Western Australia can learn about historic landmarks by scanning QR codes that bring up related Wikipedia pages on their smartphones. Here are some of the Toodyaypedia plates they created to share local knowledge on mobile phones. Photo by Gnangarra, freely licensed under CC BY-SA 2.5 au.

The WikiTowns project lets you learn more about local landmarks by scanning barcodes to bring up related Wikipedia pages on your smartphone. This initiative started in Britain’s historic town of Monmouth in 2011, using QRpedia project, a mobile Web-based system which uses QR codes to deliver Wikipedia articles to users.

When I saw this project at Wikimania in 2012, I immediately thought it was a great new way to share knowledge! After I returned home to Perth, I contacted the City of Fremantle about this idea, and from there the first WikiTown project in Australia took hold: Freopedia. In March 2013, my efforts in developing this and other Wikimedia projects resulted in my nomination for the Western Australian State Heritage Awards. While I didn’t end up winning the award, it gave me and another Wikipedian an opportunity to attend the awards, where we talked with a number of people about new ways to use Wikipedia and the free knowledge movement. The President of the Toodyay Historical Society invited me to join an expedition to visit two very significant historical sites in the Avon Valley National Park in Western Australia. It was during this hike that I met the Shire President and we first discussed the idea of applying the WikiTown concept to their area. From this initial conversation, the Toodyaypedia project was born. 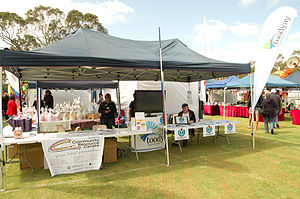 Over the next six months, we started planning Toodyaypedia, to share knowledge about historic landmarks in the Shire of Toodyay. Our first public event was an information booth at the 160th Toodyay Agricultural Show in October, 2013 (see photo). This was followed by some general editing workshops. Then in January 2014, we partnered with a Shire tourist publication, so that we could use it as a resource for some of the project’s articles. Our first contribution related to Toodyay was a “Did You Know” (DYK) entry about an Michael Cavanagh, the architect who designed the Victoria Hotel. The editor who started the article had previously been working on buildings related to Fremantle and noticed that hotel was one of the last works created by that architect. Two days later, another DYK entry was filed for a residential building used as Toodyays first bank. The editing bug had bitten a new editor, who has since created many more articles. In September 2014, we documented many unique elements that were initially set in place 100 years before, resulting in a DYK that also coincided with the re-publication of The Bugle Call by William Henry Strahan in the newspaper that first published it.

The local community in Toodyay has embraced this project and truly made it their own. They’ve placed QR codes on historical buildings, as well as throughout its two museums. The next step of the project is already underway: a walkthrough of the town, focusing on its residents. The Toodyaypedia project was recently featured in WA Weekender, a lifestyle TV program that showcases “the Best of Western Australia”: watch the segment online, to see how Toodyaypedia works and how others view the project.

WikiTown projects also create new opportunities for partner organizations to help younger generations in the community gain an understanding of their own history. In the long term, they can help participants enjoy the journey of discovery, now and further into the future.

Wikimedia Australia is ready to help anyone who would like to replicate the success we are having with WikiTowns in Western Australia: maybe your town could be next!