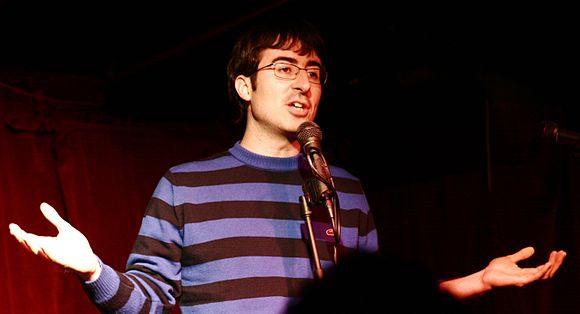 When comedian John Oliver called on the Internet to edit the Wikipedia biographies of US congressional representatives, the Internet answered. Photo by Maryanne Ventrice, CC BY 2.0

Wikipedia editors logging in on May 19 found themselves walking into an unexpected amount of anti-vandal work to keep the site in line with its extensive biographies of living persons policy. A plethora of Wikipedia articles related to the United States House Committee on Appropriations, and the fifty-one representatives serving on it, have been hit by a raft of anonymous editors making often vulgar edits referencing “chicken f****r,” or more creative combinations: “sexual conduct”, “sexual congress”, “fornicator”, “intimate relations”, or “trysts with chickens.”

This unusual burst of interest in a congressional committee can be traced back to a talk show on HBO.

“I haven’t even decided if I like this show yet!”

John Oliver‘s Last Week Tonight is a popular late-night satirical news show on HBO, a premium cable network. Oliver, a British comedian, was a correspondent on the Daily Show with Jon Stewart before starting his own show on HBO. The show’s signature voice emerged “almost as a dare,” the Associated Press reported in February, when Oliver and the show’s writers decided to do an extended twelve-minute segment on the serious topic of the death penalty. Before diving in, Oliver remarked that “I know what you’re thinking. … Wait, you’re not really going to do a comic take on the death penalty, right? It’s your second episode—I haven’t even decided if I like this show yet!” When uploaded to YouTube, the piece was quickly viewed millions of times, and the show has continually replicated this success; his episodes typically go viral in the day after they are aired. Of note was his rant on net neutrality, which has been credited by the press with drawing attention to and helping turn the tide against the plans of Comcast and other Internet providers in the US.

Marcy Kaptur, a long-serving representative from Ohio and the protagonist in Oliver’s narrative for attempting to protect chicken farmers’ right to speak out. Photo by the US Congress, public domain.

Sunday’s episode of Last Week Tonight followed a similar format with an 18-minute-long segment on the plight of chicken farmers in the US.
As Oliver tells it, independent chicken farmers are contracted by four major chicken producers in the United States to raise the chickens. These individuals can be easily penalized; they are graded on the quality of chickens they produce, and farmers not performing better than their peers can and do see their promised payments cut by up to half. Complicating matters, Oliver notes, is that there are few whistleblower protections. If farmers speak up, they assert that they are given more of the “8, 9, 10” chickens—that is, the unhealthiest chicks rated on a 1–10 scale—and receive lower pay. There is a law on the books to prevent this from happening, but congressional representatives have championed an annual rider to prevent the US government from enforcing its provisions.
The defeat of Congresswoman Marcy Kaptur‘s amendment to prevent chicken producers’ retaliation against farmers set the stage for the closing minutes of Oliver’s show:

There is actually a glimmer of hope [for chicken farmers]. That same committee is set to meet again next month, and Marcy Kaptur might again try to pass a provision protecting farmers from retaliation.” Standing in front a screen with the faces, names, and states of congressional representatives, he continued: “There are fifty-one voting members on the committee. These are their names and their states. If your representative’s name is up there, and they vote against Marcy Kaptur’s amendment, it is because they—and I cannot stress this enough—are chicken f*****s. They f**k chickens. That’s what they do. Every day, every which way.

He concluded with an explicit threat, using Wikipedia as the stick and the vote as a carrot: “unless they want that … label to follow them for the rest of their lives, they might want to think extra carefully about which way they are going to vote, because “chicken f****r” accusations do not come off a Wikipedia page easily. Or if they do, they tend to go right back up. … Don’t be one of them, that’s all we’re saying.”

Inevitably, vandals descended on the articles of Committee members, regardless of how they voted on the amendment. Even Kaptur’s article was vandalized by an IP editor complaining about her supposedly being against the amendment she herself offered. Many administrators participated in reverting the vandalism and protecting articles, and one created an edit filter to flag edits adding variations on Oliver’s.
One page heavily hit with vandalism was the biography of Steve Womack, a representative from Arkansas whose congressional district includes Tyson Foods‘ global headquarters. Nearly one hundred edits were made in a matter of hours, many of which had to be hidden from public view, before the page was closed to anonymous edits. The biography was unlocked on May 26, but this lasted for less than a day.
At least 36 other articles were also vandalized during the spree.
In an administrator’s noticeboard discussion, editors discussed what one editor called Oliver’s “crimes most foul.” Some suggested writing to Oliver and Jon Stewart, while Kevin Rutherford wrote that they should be asked to “abstain from encouraging mass-vandalism, because it causes a lot of trouble on our end.”
Others responded that such an effort would be futile. MarnetteD noted that “they are entertainers … they and their staff could care less about what happens with Wikipedia articles.” 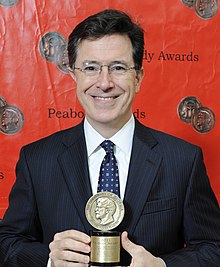 Oliver’s Last Week Tonight is not the only show to target Wikipedia. Stephen Colbert famously coined the portmanteau wikiality while calling for vandalizing the encyclopedia’s article on elephants. Photo by the Peabody Awards, CC BY 2.0.

At the same time, editors like Chillum commented on the biographies of living persons noticeboard in support of the editing freedom: “to a lot of people,” he wrote, “shaming politicians is far more important than an online encyclopedia. Without this sort of political mockery we would probably not have the freedom we need to run this project.” Mastcell found it hard to be angry with Oliver “when he has the smartest and funniest show on television.”
Berean Hunter came out as one of the strongest voices against Oliver’s actions. On-wiki, he said that “we need to send Mr. Oliver this special delivery from all of his friends at Wikipedia.” When contacted via email, he went farther:

It is irresponsible and unethical behavior whether there is humor in it or not. The exploitation of non-profit organizations and their volunteers doesn’t usually bode well when perpetrated by any public figure at any time and there is nothing different in this circumstance. It is seriously time consuming for the volunteers that do not find the vandalism amusing since they have to clean up the mess.

Oliver is far from the only late-night show to target Wikipedia. Stephen Colbert of the now-former Colbert Report, another satirical news show, frequently employed the site in his comedic monologues. In 2006, for example, Colbert claimed to have vandalized the articles Oregon and elephant, inspiring vandalism aping the edits mentioned on the show. Jon Stewart used his May 12 episode to call for edits to the article on US President Warren G. Harding.
None appear to have considered the impact of their words on the volunteers that make up Wikipedia’s user base.
Ed Erhart, Editorial Intern, Wikimedia Foundation
with Robert Fernandez, Wikipedia administrator and Signpost co-editor-in-chief
This blog post was originally published as a longer article in the Signpost, a news journal about the English Wikipedia and the Wikimedia community. It was shortened and adapted for publication on the Wikimedia Blog.