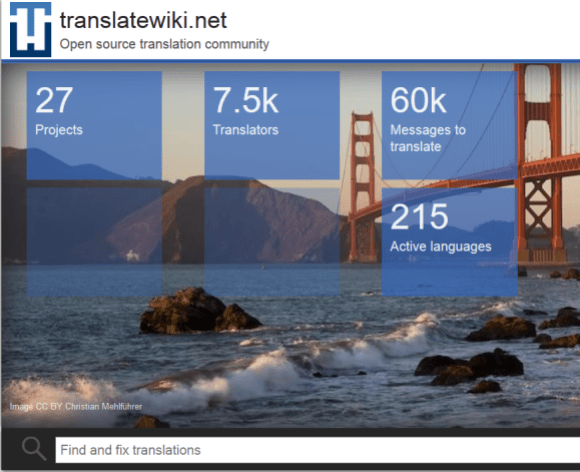 The Translatewiki.net project enables communities to localize open source software. It was recently used for a “Translation Rally” that engaged volunteers around the world to translate over 44,000 messages in nine days. Photo by Christian Mehlführer, CC BY-SA 3.0.

How can we engage volunteers to contribute in important yet monotonous tasks? Over the past year, Wikimedia Sverige (Sweden) has been experimenting with ways to strengthen its community on translatewiki.net — a little-known project that nevertheless benefits hundreds of millions of people each month.

Translating technical messages is therefore a very important task, but it is often rather isolated and and independent work. Wikimedia Sverige aimed to change that, to make it fun to jointly produce an effort which differs from the regular activity, and therefore invited Translatewiki‘s volunteer translators to a “Translation Rally” for nine days in mid-May with a sum of 500 euros to be divided between all participants reaching more than 500 translations of some of the most important messages. This concept was originally developed by Wikimedia Nederland (Netherlands).

We initially aimed to complete the messages in MediaWiki’s core software—the central messages used on the Wikimedia projects. When finished, the participants could continue with 11 other selected projects. There are almost 65,000 messages to translate to each language, of which MediaWiki constitutes approximately 24,500. Some are only one word long (e.g. “Save”), while others may be several sentences long. As the translations are completed by volunteers, some languages ​​are almost completely translated—but others are almost entirely untranslated. Many even lack translations of the core messages. Participants were given the opportunity to either keep the money for themselves or donate them to Translatewiki‘s continued operation. The majority of the translations were made into non-European languages, but these languages also benefited; for example, hundreds of messages were translated into Swedish. 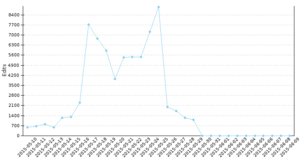 Number of edits during the Translation Rally in May 2015. Graph by Translatewiki.net, freely licensed under CC BY-SA 3.0.

Prior to the Translation Rally, an email was sent to all registered users asking them to join; this was an important step, as it brought in older users whose activity had dropped off over the years. During the rally’s nine days, the website’s activity was around four times higher than normal. 201 users contributed at least one new translation, and a massive 44,844 messages were added.

Sites using MediaWiki software are now easier to use in the 116 languages improved; it is clear that a much higher activity was achieved thanks to the Rally. However, most of the volunteers did not reach the minimum of 500 translations and couldn’t claim a slice of the 500 euros; 23 of them had valid claims and will split the prize. The winner with the most qualified translations are yet to be appointed.

A remaining question is if this type of activity has a positive or negative effect on the community in the long term. The benefit for community engagement is that people are invited and engaged in something new and exiting; you can create a noticeable buzz. However, there are potential risks when adding money or prizes into the mix. Will that reduce interest to participate in the long run, when there are no more prices? Can conflicts increase because of this? Will participants be more sloppy with their translations (this seem to have happened this time)? What can we then do to mitigate these risks? These types of predictions are notoriously hard to do without proper research, as different methods might have different problems and gains. We would greatly welcome more studies in this area.

The only thing we can say with some certainty right now is that for a limited cost, there has been a massive short-term positive effect, especially for languages spoken in poorer countries. From the graphs we developed, you can see that activity has regressed to its previous norm now that the rally ended.

The Translation Rally was organized and sponsored by Wikimedia Sverige, with a generous support from Internetfonden, and the rally itself was run by Siebrand Mazeland at the Wikimedia Foundation.