Medical content on the Chinese Wikipedia was both increased and improved by a collaboration between Wikimedia Taiwan, Wikiproject Medicine, and a Taipei medical school. As a result, a wide range of medical articles were translated by students into Chinese, on important topics such as malaria. Micrograph by Nephron, freely licensed under CC BY-SA 3.0.

The Medical Translation Project, an ambitious attempt to improve and translate Wikipedia’s medical content from English into other languages, began in 2012. While it was initially a collaboration between WikiProject Medicine and Translators Without Borders, one particularly successful model was developed and carried out by Wikimedia Taiwan, in partnership with the National Taiwan University College of Medicine. 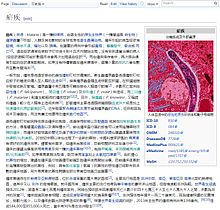 This article on Malaria was translated from English to Chinese as part of this project. Screenshot by Doc James, CC BY-SA 4.0.

This project began in the fall of 2014, when students were invited to translate entire high-quality medical articles into Chinese. The students initially struggled, due to the size and complexity of these articles. The project’s focus then shifted from improving entire articles to simply improving the leads, the three-to-four-paragraph prefaces to Wikipedia’s articles. Since many languages have very little medical content overall, it was believed that concentrating on a large number of short articles would have a greater impact than working on only a few longer articles. The leads of the English Wikipedia’s medical articles, which needed improvement, also benefited from this attention.

The students began by working on an article from a list of entries ready for translation from the English, with Wikimedia markup in place. They then used a combination of Hackpad and Facebook to coordinate their efforts and translate content using this markup. Once the translation was complete, they sent the completed article to editors from Wikimedia Taiwan, who added them to the Chinese Wikipedia. This process worked very well: as the students gained more skill and enthusiasm, they returned to the full articles and began working on them as well — and as of May 2015, 16 full articles and 48 short articles have been translated into Chinese.

Collaborative editing of an article on anemia into Chinese. Screenshot by Shangkuanlc, CC BY-SA 4.0.

This project has resulted in benefits not just for Wikipedia, but also for the students. While medical students in Taiwan learn mostly in English, after graduating they practice mostly in Chinese: this project has been an excellent way for students to not only develop their abilities to translate medical information into their own language, but also to learn the medical content at the same time. And their translations will help give the next generation of students the option to study medicine in their own language.

Aaron Huang, a medical student involved in the project, shared his experience: “Being a participant in this project changed my perspective on knowledge. In the process of finding the balance between using precise professional terms and common words to explain a medical condition, I learned a lot. This has helped me to have better communication with my patients… something that I had not expected when I started. Joining [Wikimedia Taiwan] was a great opportunity for me to rethink not only medical knowledge but also medical education.”

This collaboration’s success offers another potential model for chapters to form relationships with medical schools. Previous educational efforts have run into issues, with the use of low-quality citations, poor formatting, and copyright. This method of collaboration avoids these potential pitfalls by providing students an easy introduction to Wikipedia editing.

Currently, there are 150 short articles and 34 long articles ready for translation, and we hope to eventually increase the number of short articles to 1,000. While we initially concentrated on core human health problems, we have recently began to develop content pertaining to essential medications and public health infrastructure, like sanitation.

One of the keys to success has been ensuring that all of the content added to the translation list is of very high quality, meaning that every sentence accurately reflects and is supported by a reliable secondary source.

These efforts exemplify how chapters and thematic projects such as Wiki Project Med can effectively work together, each bringing their specific expertise to a joint initiative. We would love to see other groups emulate this promising model.