The Content Translation Tool makes it easier to create new new Wikipedia articles from other languages. It is now available as a beta-feature in 148 Wikipedias. The tool now features an updated selector with image thumbnails for search results. Screenshot by Runa Bhattacharjee, freely licensed under CC0 1.0

Since our last blog post, much has happened in the world of Content Translation — a tool that makes it easier to translate Wikipedia articles into different languages. The Wikimedia Language Engineering team deployed as a beta-feature in January 2015 in the Catalan, Spanish and Portuguese Wikipedias; today, nearly 150 Wikipedias have access to the tool, and more than 5,000 articles have been created by more than 1,500 editors.

While on the one hand there are large Wikipedias, like English or German, where thousands of volunteers have written articles about millions of topics, there are over 100 smaller Wikipedias where a handful of volunteers are struggling to add more content. Translating from an existing article in another language is a common method adopted in such Wikipedias to create more content. Content Translation attempts to solve this rather daunting problem by simplifying the process, allowing editors to quickly create the first draft of the article and focus on improving the content. It includes an editing interface and translation tools that make it easy to adapt wiki-specific syntax, links, references, and categories. Machine translation support via Apertium is also available for a limited set of languages, which can considerably speed up the process; if it is currently missing for yours, we invite you to take our ongoing survey to test and provide feedback.

The tool presents a simple workflow—select the source language and article to translate, select the target language, translate the contents of the article, and publish it as a new page in the corresponding Wikipedia. For category adaptation, the corresponding category needs to exist in the target Wikipedia. Translators can also save the translations and work on it later. 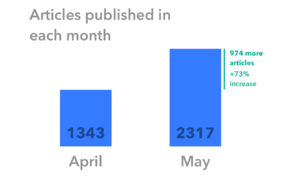 In the months of April and May, we focused on improving features that made it easy for users to start translating with Content Translation by quickly gaining access to it. We introduced a campaign that prompted users to try Content Translation instead, when they were creating a new article. Users could enable the feature directly from the campaign message screen and begin translating the page from another language. A call-out message was also added to the Contributions menu providing quick access to different kinds of contributions (including translations). As an outcome of these measures, we now see a sharp increase in the number of new articles being created every week by increasing number of new users (see images). We expect to get better insight into the usage numbers in the coming month.

Deployment update and what’s coming next

In the coming month, we aim to continue adding Content Translation as a beta-feature to more Wikipedias so that more users can test the tool. This not only exposes special cases that we need to be aware of (like local gadgets or Wikipedia specific scripts) but also provides us with feature suggestions.

Read more about Content Translation developments and other updates from the Language Engineering team in our monthly report. We would also like to invite everyone for our online office hour session on June 10 at 14:30 UTC.