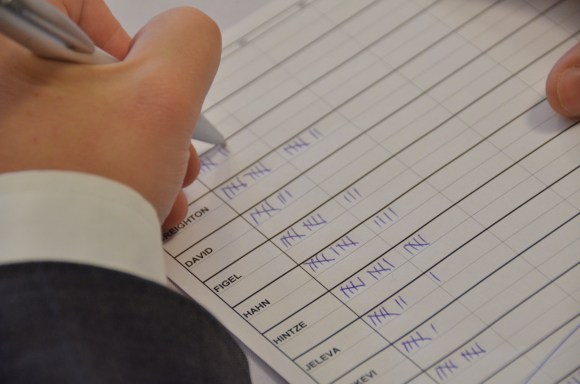 The recent Wikimedia Foundation Board elections engaged 5,100 online voters to choose between 21 candidates. Learn how this online election came together, and how it differs from offline elections. Photo by European People’s Party, freely licensed under CC-BY-SA 2.0
Last week, we reported on the results of  the biennial election of the Wikimedia Foundation’s Board of Trustees. With 21 candidates from around the world and over 5,100 voters from 183 wikis, it was the biggest election the WMF has ever run. It also came hot on the heels of the election for 5 members of the WMF Funds Dissemination Committee and its Ombudsperson. Both were planned, prepared, run, and completed in less than 2 months.
How did all of it come together? For the Elections Committee, it started in early April when the WMF put out a call for volunteers to help coordinate this year’s elections. Nine Wikimedians from around the globe were selected, and within a week we were actively discussing the elections on Meta, IRC, WebEx, Wikimedia-l, and the committee’s private mailing list.
The Committee had a lot of decisions to make in under three weeks: setting a schedule that would end at least a month before Wikimania, determining who would be eligible to vote, who would be eligible to run, how the voting would be done, how the results would be calculated, and a myriad of other minor and major details. With each topic—especially the voting method—we considered multiple options, talked with past committee members, and debated the impact of these decisions on the overall goals of the election; we were, however, only able to allot 2 or 3 days for each discussion. For the first time ever, we allowed Wikimedians to privately nominate each other in harmony with the normal self-nomination process.
Once nominations opened, we shifted our focus to encouraging voter participation, formatting the ballots, how to best utilize professional translators with volunteer support to prepare election content in seventeen high-priority languages, and responding to inquiries.  Because Election Committee members live around the world, our work and discussions often went on 24 hours a day.

An image of the WMF “I voted” sticker. Photo by Varnent, freely licensed under CC BY-SA 4.0.

Each round of voting involves unique and complex procedures. To provide security, an encryption key must be entered to start and end the elections. The key is stored on a USB drive that must be plugged directly into a Wikimedia server. If the key is entered before the election is scheduled to end, voting is halted. This immediately alerts the Election Committee that there is a problem. During the voting, the key is stored at the office of the Wikimedia Foundation’s outside legal counsel. These safeguards ensure that it is not possible for anyone to get the results before the votes have been certified by the Elections Committee.
The committee determines that votes are valid by reviewing the usernames of voters as well as technical data such as IP addresses and user agents. Committee members discussed any votes that raised concerns, and decided as a team to strike votes that they determined were invalid for reasons such as use of multiple accounts to vote, or the likelihood that the account is a bot or is otherwise unqualified.  During this year’s FDC election, we did not strike any votes as a result of this checking. During the board vote, however, we struck 4 votes believed to be either sock-puppet duplicates or bots.  Once the members of the Election Committee agreed that any questions about individual votes had been resolved, the encryption key was used to generate the results.
After the votes were certified by the committee, the results were sent to the WMF’s Legal Department to verify the work done by the committee. Once the Elections Committee and Legal had certified the votes and results, they were sent to the WMF’s Board of Trustees for final certification. When these steps were completed, the results were shared with the community.
After the results were determined, final background checks were started on the three candidates with the largest support from the community. Assuming there are no problems discovered, the Board of Trustees will formally appoint the candidates chosen by the community at this year’s Wikimania in Mexico City.
That brings us to our last request to the community. The final step in the election process is the Post-mortem report. This year the Election Committee will be producing a report, and as usual, there is a report which all members of the Wikimedia community are encouraged to contribute to. We would appreciate your input, as voters, candidates, and observers—what went well for you in this election?  What could we do better next time?  Your thoughts are crucial to helping future elections be even more successful, and we hope that you will offer your feedback and ideas.
The 2015 Wikimedia Foundation Elections Committee thanks every Wikimedian who participated in the voting and encouraged others to participate in the elections. The 33 individuals who stood for election deserve tremendous gratitude from all Wikimedians for their courage and willingness to serve.
The committee would like to extend special thanks to the Wikimedia Foundation staff and contractors who supported these election efforts including Philippe Beaudette, Tim Starling, Geoff Brigham, Stephen LaPorte, Heather Walls, Valerie Pie, Ed Erhart, and Fabrice Florin. Finally, the Committee would like to join others in thanking the outgoing Trustees for their years of dedicated service to the movement: María Sefidari, Phoebe Ayers, and Samuel (SJ) Klein.
James Alexander, Community Advocacy, Wikimedia Foundation
Gregory Varnum, Volunteer Coordinator, 2015 Wikimedia Foundation Elections Committee