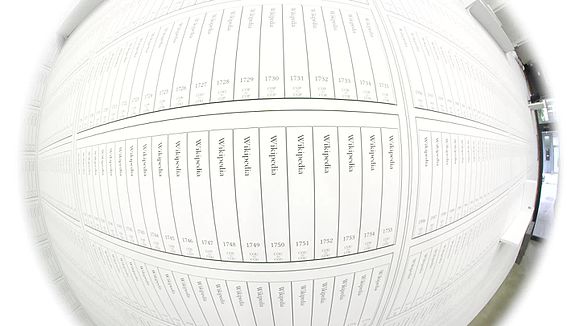 An interview with Michael Mandiberg, the artist behind Print Wikipedia. You can also view the above video on YouTube and Vimeo. Video by Victor Grigas, freely licensed under CC BY-SA 3.0.

After six years of work, a residency in the Canadian Rockies, endless debugging, and more than a little help from my friends, I have made Print Wikipedia: a new artwork in which custom software transforms the entirety of the English-language Wikipedia into 7,473 volumes and uploads them for print-on-demand. I’m excited to be launching this project in a solo exhibition, From Aaaaa! to ZZZap!, at Denny Gallery in the Lower East Side of New York City, on view now through July 2nd.
The two-week exhibition at Denny Gallery is structured around the upload process of Print Wikipedia to Lulu.com and the display of a selection of volumes from the project. The upload process will take between eleven and fourteen days, starting at ! and ending at ℧. During this time, the upload process will be open for all to see around the clock—at least during the first weekend, as the gallery will remain open through the night in recognition that the computer itself works continuously. There will be two channels for watching this process: a projection of Lulu.com in a web browser that is automated by the software, and a computer monitor with the command line updates showing the dialogue between the code and the site. If you aren’t able to visit the gallery in person, you can follow the process on Twitter; we will post to the @PrintWikipedia Twitter account after it finishes each volume.
Individual volumes and the entirety of Print Wikipedia, Wikipedia Table of Contents, and Wikipedia Contributor Appendix will be available for sale. All of the volumes will be available on Lulu.com as they are uploaded, so by the end of the upload/exhibition all of the volumes will be available on for individual purchase. Each of the 7,473 volumes is made up of 700 pages, for a total of 5,244,111 pages. The Wikipedia Table of Contents is comprised of 63,372 pages in 91 volumes. The Wikipedia Contributor Appendix contains all 7,488,091 contributors to the English-language Wikipedia (nearly 7.5 Million).
It is important to note that I have not printed out all of the books for this exhibition, nor do I personally have any intention of doing so—unless someone paid the $500,000 to fabricate a full set. There are 106 volumes in the exhibition, which are really helpful for visualizing the scope of the work. It isn’t necessary to print them all out: our imaginations can complete what’s missing.

Wikipedia has been printed. Photo by Victor Grigas, freely licensed under CC BY-SA 3.0.
Books are microcosms of the world. To make an intervention into an encyclopedia is to intervene in the ordering systems of the world. If books are a reduced version of the universe, this is the most expanded version we as humans have ever seen. For better or for worse, it reflects ourselves and our societies, with 7,473 volumes about life, the universe, and everything. An entry for an film or music album will pop up every few pages, and the entry for humanism will be located in a volume that begins with “Hulk (Aqua Teen Hunger Force)” and ends with “Humanitarianism in Africa” and the names of battles will fill the 28 volumes with entries that start with “BAT.” It’s big data that’s small enough that we can understand it, but big enough that no human will know all of it. It is small enough that I can process it on a desktop computer, though big enough that each round of calculations, such as unpacking the database into a MySQL database, takes up to two weeks to complete, and the whole build cycle takes over a month. As we become increasingly dependent on information what does this relative accessibility of its vastness mean.
Print Wikipedia is a both a utilitarian visualization of the largest accumulation of human knowledge and a poetic gesture towards the futility of the scale of big data. Built on what is likely the largest appropriation ever made, it is also a work of found poetry that draws attention to the sheer size of the encyclopedia’s content and the impossibility of rendering Wikipedia as a material object in fixed form: once a volume is printed, it is already out of date.
My practice as an artist is focused around online interventions, working inside of existing technical or logical systems and turning them inside out. I make poetic yet functional meditations that provoke an examination of art in a non-art space and a deeper consideration of the Internet as a tool for radically re-defining communication systems. For example, I sold all of my possessions online in the year-long performance and e-commerce website Shop Mandiberg (2001), and made perfect copies of copies on AfterSherrieLevine.com (2001), complete with certificates of authenticity to be signed by the user themselves. I made the first works to use the web browser plug-in as a platform for creating artworks: The Real Costs (2007), a browser plug-in that inserts carbon footprints into airplane travel websites, and Oil Standard (2006), a browser plug-in that converts all prices on any web page in their equivalent value in barrels of oil.

Mandiberg (left) with assistant Jonathan Kiritharan. Photo by Tilman Bayer, freely licensed under CC BY-SA 3.0.
I began editing Wikipedia a couple years before I first started working on this project in 2009, though it is not my only engagement with Wikipedia. I’m a professor of digital media at the City University of New York, and I teach with Wikipedia in my classes. I have written about this process, my teaching has been covered on the Wikipedia Blog, and one of my assignments was included in a series of Case Studies on teaching with Wikipedia put together by the Wikimedia Foundation, a function now done by the Wiki Education Foundation. I am co-founder of the Art+Feminism, a campaign to increase female identified editorship on Wikipedia and improve the site’s articles on women and the arts.
Wikipedia matters to me because it is a collaboratively produced repository of human knowledge made through unalienated labor and kept in a digital commons. Most people are acting in good faith, and amazingly those who aren’t can’t seem to bring the whole thing down.

Wikipedia contributor appendix, volume 1. Photo by Victor Grigas, freely licensed under CC BY-SA 3.0.
This was not a solitary endeavor. I was grateful to work with several programmers and designers, including Denis Lunev, Jonathan Kiritharan, Kenny Lozowski, Patrick Davison, and Colin Elliot. I was also supported by a great group of people at Lulu.com who went above and beyond to support this wild and quite unwieldy project.
If you’re in New York, I hope can come see the show. The show will remain open 24 hours a day through 6pm, Sunday June 21st. We will be hosting a special New York City Wikipedians on Sunday June 21st at 1PM. For those of you far away, you can follow the upload process at PrintWikipedia.com and on Twitter.
Michael Mandiberg, artist, Associate Professor, City University of New York