Danaus chrysippus, also known as the plain tiger or African monarch, is a butterfly widespread in Africa and Asia. This rare and hard to reproduce picture, shows the butterfly’s hair-pencil. Photo by Jeevan Jose, freely licensed under CC BY-SA 4.0.

When asked who he is, Jeevan Jose responds—in his typically unassuming way— “not a notable person.” Yet his story of evolution from a long-term Wikipedia reader to an active contributor remains an inspiring example for many of his fellow volunteers.
Born to a family of traditional farmers in the small village of Kadavoor, Kerala, Jeevan—or Jee for short—is an entrepreneur, a volunteer photographer, and a Flickr user-turned-Wikimedian. Jee has observed a wide variety of plants and animals from a young age; Kadavoor is located on the border of Western Ghats, a UNESCO World Heritage Site and one of the eight “hottest hotspots” of biological diversity in the world. His passion for the local flora and fauna shows through his many excellent contributions. 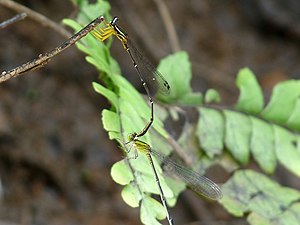 When Jee purchased his first hybrid camera in 2009, he started photographing Kerala’s varied plants and bugs, publishing his work at Flickr. Recalling that period, he says that he found Wikipedia to be a useful resource to improve his knowledge on the subjects he photographed. When a Wikimedia Commons volunteer asked Jee to share his pictures under a free license so that they could be uploaded to Commons, Jee did not hesitate. “I believed it to be a small expression of gratitude on my side given that I had used Wikipedia a lot,” he remembers.
Jee’s beginnings with Wikimedia did not go very smoothly. “Even though I started uploading images to Commons, I didn’t understand it much,” he admits. After another of his pictures had been successfully nominated for quality image status by someone else, however, Jee was hooked. “I started nominating my pictures for quality image and featured picture status myself, and soon became addicted to it,” he adds with laughter.
In just over five years of documenting the biodiversity of Kerala, Jee has uploaded over 1,100 pictures to Wikimedia Commons; almost 150 are now classified as being of quality image standard, with close to 40 of them being awarded featured picture status by the Commons community. In addition to submitting pictures, Jee has been spending his time helping other Commons contributors at the help desk, the Village Pump, and as a member of the volunteer response team, OTRS. When asked about his motivation to contribute, Jee says simply: “I like the idea of collecting and preserving knowledge and making it freely available to anyone who needs it.”
As I query him about his plans for the future, Jee makes sure to mention his crowdfunding campaign that was funded earlier this year. In about a month, the campaign raised $3,150 that will allow Jee to upgrade his photo equipment and take more high quality pictures of Kerala’s plants and animals. “I’m very happy to see the success of the campaign and I’m eager to get back in the field,” he says. “I wish everyone could get such support; it would guarantee an abundant flow of free knowledge.”
Answering my question about his views on the future of the Wikimedia movement, Jee says: “I hope Wikimedia will remain the main source of free knowledge.” In a true Wikimedian spirit, he quickly describes areas worth improving. “But to be able to do that, it must be more democratic and willing to change or update its technical side according to people’s needs. It would be nice if we could identify potential contributors and help them by making available the required infrastructure; a good camera or a computer for a youngster from the third world could do wonders.”
Tomasz W. Kozlowski
Wikimedia community volunteer