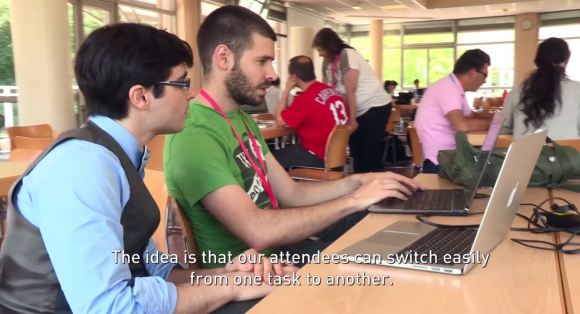 Wikimedia developers from around the world met last month in Lyon, France, for the Wikimedia Hackathon 2015. To meet a few of them, watch this short video.
On May 23, public transportation workers were on strike in Lyon, France. But it would have taken a lot more to discourage our coders from around the world, gathered here to develop tools for the Wikimedia projects! They were invited by Wikimédia France for our annual Wikimedia Hackathon, which took place at Écully, a small town just outside of Lyon. 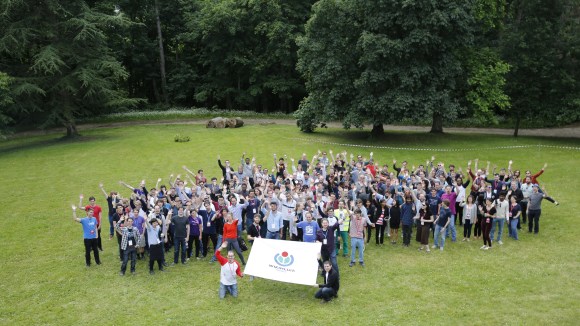 A traditional group photo. Photo by Pierre Selim, freely licensed under CC-BY-SA 4.0.
But why a hackathon … and why in Lyon?
The Wikimedia Hackathon is an annual gathering of coders from across the Wikimedia movement. Many of the tools you use every day on Wikipedia and other projects are developed during hackathons like this one.
This year’s event was held in Valpré, a major conference and training center near Lyon, in France’s second-largest metropolitan area. Lodging and work rooms were in the same location, and participants had access to a wide range of services to make their stay more comfortable: a daycare, a restaurant, a large playing field—and five meeting rooms available to developers night and day.
The 2015 Wikimedia Hackathon was a real success, with over 200 participants from 20 different countries! This year’s programs were carefully designed to welcome new contributors: 66 new participants joined us in the convention center’s crowded amphitheater, for the hackathon’s opening session, on May 23, 2015 at 9am. 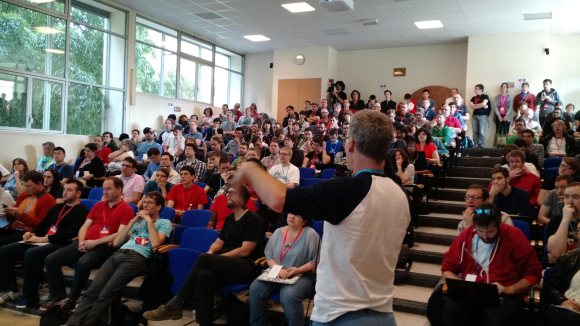 We had a full house at the opening ceremony. Photo by Jean-Philippe Kmiec, CC-BY-SA 4.0
How does it work?
For three days, developers worked on software and tools related to Wikipedia, Wikimedia Commons, Wikidata, MediaWiki and many other projects. In total, 62 meetings and workshops took place during the event. Participants had the choice of working in one of five meeting rooms, so they could code around the clock to develop better software.
We also organized a number of public lectures, to encourage interactions with newcomers, and to introduce them to the Wikimedia movement, to Wikimédia France and other wiki projects. It was a great opportunity to spotlight our local group in Lyon and discuss their many initiatives in the region.
A project showcase
No fewer than 33 projects were presented at the closing ceremony on Monday, May 25 at 4pm. We saw cool new features, like Wikipedia on Apple Watch, and an ultra minimalist version of the free encyclopedia: La découvrir! More technological projects were also shown, such as a tool which generates complex search queries using sentences written in natural language.
A media event
The Wikimedia Hackathon was covered by a dozen regional and national publications, and it was a great opportunity to spread the word about our association and the Wikimedia projects.
Thanks to all our attendees, and see you at next year’s Hackathon in Jerusalem!
Jean-Philippe Kmiec
Manager of Communications and Events
Wikimédia France

Infographic by Jean-Philippe Kmiec, CC-BY-SA 4.0
From the editors: This story was originally published in French on the Wikimédia France blog and on Planet Wikimedia. It was translated into English by Fabrice Florin.