Wealthy apples in Piper Orchard, Seattle, Washington taken with a Leica CL. Photo by Dennis Bratland, freely licensed under CC BY-SA 3.0.
Today, June 29th, is World Camera Day 2015! To celebrate, upload or check out photos taken with different cameras on Wikimedia Commons. Wikipedia and Wikimedia Commons do a great job of not only providing an article for reference and more info, but also images and examples of photos taken with different cameras.
The best part is that Wikimedia Commons photos are freely licensed under Creative Commons’ CC BY-SA (example). This means that you can freely reuse these wonderful images, taken with fantastic and high quality cameras, as long as you reshare them under a similar license and attribute the photographer.
Find out more about cameras on Wikipedia and see photos taken by specific cameras on Wikimedia Commons.
The below text is adapted from Wikipedia; it was written by various contributors and is freely licensed under the CC BY-SA 3.0 License and GFDL. Authorship information can be found in each article’s “history” tab.

Kodak Brownie Flash III camera. Photo by NotFromUtrecht, freely licensed under CC BY-SA 3.0.
Brownie is the name of a long-running popular series of simple and inexpensive cameras made by Eastman Kodak. The Brownie popularized low-cost photography and introduced the concept of the snapshot. The first Brownie, introduced in February 1900, was a very basic cardboard box camera with a simple meniscus lens that took 2¼-inch square pictures on 117 rollfilm. With its simple controls and initial price of $1, it was intended to be a camera that anyone could afford and use, hence the slogan, “You push the button, we do the rest.” The camera was named after the popular cartoons created by Palmer Cox. Consumers responded, and over 150,000 Brownie cameras were shipped in the first year of production. An improved model, called No. 2 Brownie came in 1901, which produced larger photos and cost $2. It was also very popular.
Taken with a Kodak Brownie 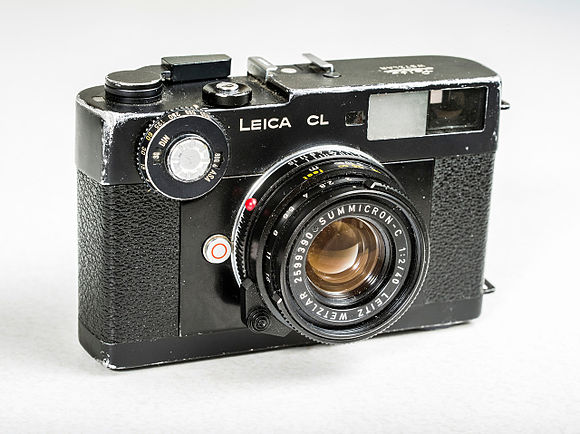 Leica CL with 40mm Summicron-C. Photo by JamesPFisherIII, freely licensed under CC BY 3.0.
The Leica CL is a 35 mm compact rangefinder camera with interchangeable lenses in the Leica M-mount. It was developed in collaboration with Minolta who manufactured it. It first appeared in April 1973 and was released in the Japanese market in November 1973 as the Leitz Minolta CL. Both the Leica CL and Leitz Minolta CL were manufactured in a new Minolta factory in Portugal.
Taken with a Leica CL 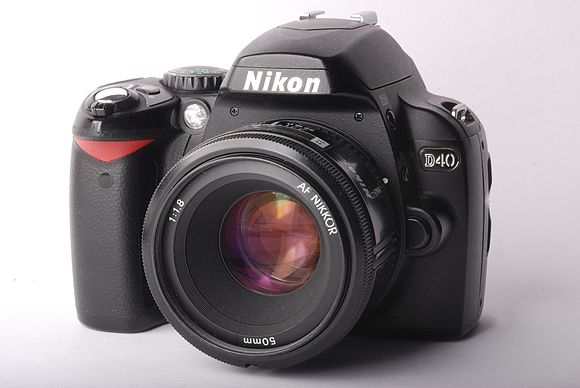 The front of a Sony Alpha A700 DSLR. Photo by Evan-Amos, Public domain.
Sony α 700 (DSLR-A700) was the second model launched in the Sony α series of digital single-lens reflex cameras. This model appeared to reuse some technology of the former Konica Minolta Maxxum 7D. On March 8, 2007, at the PMA Trade Show, Sony announced two new α cameras, both positioned to be “above” the α100 in the Alpha line-up. One model was referred to as a “high amateur” model, with a release date of late 2007. The A700 was discontinued, and its successor, the A77 (SLT-A77), was announced on August 24, 2011, with availability from October 2011.
Taken with Sony DSLR-A700

2012 Canon EOS 1D X. Photo by Morio, freely licensed under CC BY-SA 3.0.
The Canon EOS-1D X is the professional flagship digital SLR camera body by Canon Inc. It succeeded the company’s previous flagship Canon EOS-1Ds Mark III and the Canon EOS-1D Mark IV. It was announced on 18 October 2011. It was released in March 2012 with a suggested retail price of $6,799.00 (body only) and a suggested retail price of £5,299 in the United Kingdom. The camera is supplemented by the Canon EOS-1D C, a movie-oriented camera that shares most of its still photographic features with the 1D X. The 1D C was announced in April 2012 and released in March 2013.
Taken with Canon EOS-1D X
Andrew Sherman
Digital Communications Intern
Wikimedia Foundation