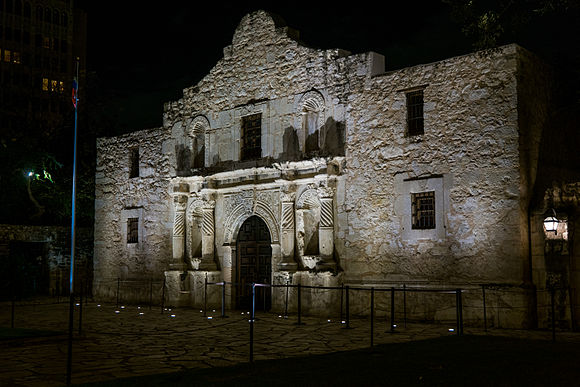 The Alamo became a symbol for all Texans after most or all of its defenders were killed by the Mexican army. Photo by Nan Palmero, freely licensed under CC BY-SA 2.0.
Students in the United States and Mexico are often required to learn about the history of the Texas Revolution, the outcome of which foreshadowed a much larger war and the loss of a significant portion of Mexico’s territory in what is today the American Southwest. The tales of individual actions and the Battle of the Alamo—the symbolically pivotal event in the conflict—have persevered in the nearly 180 years since the conflict.
For those less familiar with this narrative, a hurriedly assembled rebel army was able to separate themselves from Mexico in large part due to the crucial Battle of San Jacinto, when they captured the President of Mexico. They used this advantage to force an end to the war.
Wikipedia editor Karanacs grew up in Texas and is therefore well-acquainted with this tradition. “During a family vacation to see the Alamo Mission in San Antonio when I was 10, we watched the film Alamo: The Price of Freedom,” she says. “For the first time, I understood the impact that war had on ordinary people. I cried for a little boy who lost his father in a battle fought 150 years before I was born.” Two decades later, this interest manifested itself on Wikipedia. Like many editors of the world’s largest encyclopedia, she was browsing the site’s articles and found that they were of relatively poor quality—and that the traditional narrative she’d learned was not necessarily accurate.

Sam Houston was a general in the revolution and, later, the president of the fledgling republic. Photo by Mathew Brady, public domain.
The real descent down the rabbit hole, however, began when a group of volunteer editors called for collaborators to rewrite the article on Texas A&M University, Karanacs’ alma mater. She joined them “even though I had no idea what they were talking about.” It wasn’t long before this snowball grew larger: she was soon “in love with Wikipedia—the research, the writing, the teamwork, the satisfaction of knowing that something I helped create would help assuage someone else’s curiosity, and hopefully dispelling some of their misunderstandings of the topic.”
Between 2006 and 2010, Karanacs wrote 23 featured articles, the highest article rating on the site and only reached after a rigorous peer review process. She branched out from Texas history at times with articles like Irish Thoroughbred, Nora Roberts’ first romance novel, or Gumbo, a Louisianan soup. Still, the grand majority focused on her home state, such as the French colonization of Texas, and its revolution against Mexico, like the Grass Fight or the Battle of the Alamo. She was “most fascinated by the human elements,” she says, “and the people on both sides who made decisions that cumulatively led to the place I live.”
Still, the challenges proved daunting. The host of editors who enticed her to join Wikipedia in 2006 had dwindled by 2011 to just her. When combined with the amount of work required and three young children at home, Karanacs made the difficult decision to quit the site. “My Wikipedia time turned into ‘chase-the-toddler’ time,” she said.
More than three years went by before Karanacs was tempted back to the site by an email from fellow native Texan editor Maile66, who started editing Texas-related articles in 2006. She alerted Karanacs to an enticing offer: the History Channel‘s then-upcoming Texas Rising wanted the article on the Texas Revolution to run on the English Wikipedia’s main page on the day of the show’s premiere. In return, the channel would point viewers and interested fans to the page for more information. 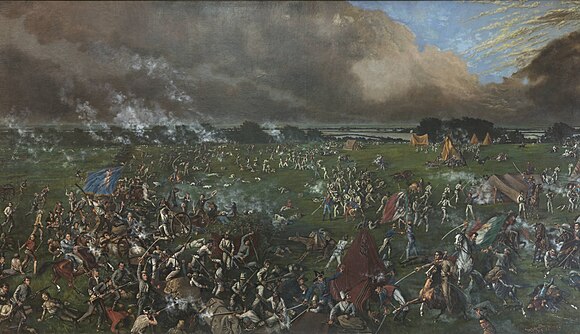 The last major battle of the revolution was fought near San Jacinto. Painting by Henry Arthur McArdle, public domain.
Karanacs’ reaction was two-fold: she was intrigued by the opportunity, which offered outside interest and a long deadline, but cautious. Readers of Wikipedia may not be aware of the struggle of writing wide-scope articles; many editors are quick to espouse that articles on a war, for instance, are more difficult to write than articles on the individual battles and skirmishes that occurred during that war. Karanacs told me that her research for these battle articles would require reading three to four books on the general topic—the war, in our running example—and anywhere from five to twenty articles on the battle itself. The actual writing could take anywhere from twenty to forty hours and could be done alone.
A big picture article, on the other hand, requires a great deal more effort and people. “I have been researching the Texas Revolution off and on for seven years,” Karanacs said. “There have been literally thousands of books written on that topic, and I likely spent more than eighty hours just identifying appropriate sources to consult.” The actual reading of these sources took a good deal longer—and most didn’t make it into the article. Karanacs believes that covering these works was important, if only to “establish scholarly consensus and ensure that I wasn’t missing any of the more focused angles scholars delved into.”
And there were a lot of them. Karanacs recalls that many of the books she could acquire were written by American and Mexican scholars, as one would expect, but there was also one written by a German (albeit translated into English) and one by a Scottish researcher. Her local librarians were an invaluable resource, as they were able to point out monographs that she missed and put in dozens of inter-library loan requests, as was the relatively new Wikipedia Library, which helps connect editors to outline journal and reference databases that Wikipedia editors can cite. Karanacs called the latter a “tremendous resource”—”I am blown away by how much easier it is now to do some of the research.”
Karanacs also undertook a physical journey to several of the areas where significant events occurred. “It made it all just a little more real,” she told me. “Both sides fought for something they believed was important, and it was important to me to present each of their perspectives fairly and with respect.”

Santa Anna—the commander of the Mexican forces—surrenders. Painting by William Henry Huddle, in the public domain.
Over a three-month span, Karanacs and Maile66 worked together to develop the Texas Revolution article itself. Their plan of attack included scrapping the entire existing article, all 5,243 words of it, and starting anew. This allowed them to not worry about where existing content had come from and instead concentrate on including facts and views from the principal sources on the topic. They had to decide how much weight each view should receive, similar to when an academic historian evaluates a topic’s place in historiography. This differs from primary source research in that it evaluates historical narratives that have emerged from the event. Using the Texas Revolution as an example, historians once portrayed the Texans as white, from the US, and universally in support of the rebellion. Contributions from Tejanos (native-born Texans of Spanish or Mexican heritage) were overlooked. Time often plays a significant role in historiography, and this is no different: here, the revolution’s traditional narrative, upheld by many of the television and film productions of the last fifty years, has since been been superseded with the recognition that a good percentage of Texans actually supported the Mexican government, not the rebel side, and that Tejanos featured in many significant roles.
National narratives came into play as well. Supporters of the revolution portrayed themselves as fighting for a just cause against an oppressive overlord, while Mexicans, after the Mexican–American War of 1845, thought that the region was stolen from them by the United States. After their initial assessments, Karanacs and Maile identified areas that required more research and each returned to the library.
When satisfied the article was comprehensive and balanced, Karanacs and Maile nominated Texas Revolution for featured status. Having already received comments from three editors, ten more editors commented during the review period. “It really did take a village,” Karanacs told me, and estimated that she personally spent an estimated three hundred hours on the article, underlining just how difficult it can be to write these sorts of big-picture articles. Finally, Texas Revolution became a featured article on April 18—more than a month before the deadline requested by the History Channel.
The History Channel’s historians suggested only minor changes in the article’s wording; overall, they were very pleased with the article, which has now doubled in size to over 10,000 words. It ran on Wikipedia’s main page on May 25, and about 54,000 people read the article over a four-day period—and possibly thanks to the popularity of Texas Rising, more than a thousand people per day viewed it for nearly all of the first half of June.
For Karanacs’ part, she told me that “I am extremely proud of this project. First, that we created one of the best short(ish) yet still comprehensive overviews of this topic that exists anywhere on the web, in my opinion. Second, that we brought an article that is on a broader topic—an entire war, rather than a single battle—to featured status. Third, that real paid historians thought we did a good job, and fourth, that we achieved this through a collaboration, rather than as individual editors.” When asked why they are so important in the greater context of North American history, she replied:

“In the nineteenth century, the Texas Revolution fit neatly into the United States philosophy of manifest destiny. According to that narrative, Americans went to what was then Mexico to show a poor, backwards group of people a better way to live. Of course, they chose to break free of their shackles and embrace freedom—interpreted as annexation to the US. Texian independence and subsequent annexation to the United States directly led to the Mexican-American War and Mexico’s loss of half of its territory to the United States. In Mexico, focus was placed more on the Mexican-American War, and the Texas Revolution, when discussed, was often framed as American intervention in Mexican affairs.

“The Texas Revolution is also a very compelling story of a small group of underdogs defeating a quasi-established power. Logically, the Texians should not have won that war, yet they did. Even the Texian defeats were romanticized; from almost the moment that the Alamo fell to the Mexican Army, the battle was compared to the Greek Battle of Thermopylae. A small group of men deliberately turned down the chance to retreat, knowing they faced annihilation, in order to defend their homeland against a larger invading force. Historians have shown that this narrative is inaccurate, but the general public does not accept that new interpretation.”

Perhaps most importantly, Karanacs’ interest in Wikipedia is now rekindled—and it’s for the “same reasons” from her the first time around: “pride in a job well done, the joy of teamwork, and pure nerdiness.” Maile has already started a new collaboration with Karanacs with the Battle of San Jacinto, although the former is taking the lead role this time. They hope to have all thirteen Texas Revolution-related articles at featured status by next year.

Karanacs and Maile wish to thank the many editors who helped them get this article featured, including—but not limited to—Mike Christie, Dank, P.S. Burton, and Iridescent. 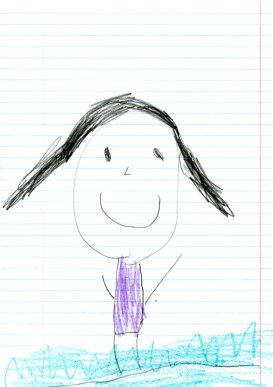 Karanacs as drawn by one of her young children. Photo from Karanacs, freely licensed under CC BY-SA 4.0.