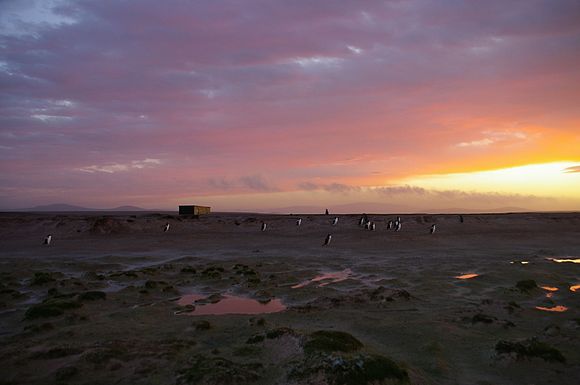 Gentoo Penguins, West Falkland. Photo by Ben Tubby, freely licensed under CC BY 2.0
An online edit-a-thon called “Dong Yuan Ling” (Chinese: 动员令/動員令, literally “Mobilization Order”) is an annual summer tradition on the Chinese Wikipedia. This year’s event—the thirteenth ever hosted—began on 4 July 2015. Over the next two months, editors on Chinese Wikipedia will be encouraged to join and improve articles on topics ranging from Math, Earth Science, Physics, Music, Electronic Science/Engineering, Computer Science, and European History & Geography. Articles in many other languages are also promoted.
Dong Yuan Ling’s major goal is to improve the quality and quantity of certain topics in the Chinese Wikipedia; it stimulates Wikipedians to contribute high quality content on Wikipedia, and attract more students to edit Wikipedia while they are on their summer vacation.
Dong Yuan Ling was initially created by User:真實事求是, a Malaysian Chinese Wikipedian, and the first contest ran from 15 July and 1 August, 2006. He also led the second, third and fourth iterations. Since the seventh Dong Yuan Ling in 2009, it has ran in every summer (Northern Hemisphere). In the third Dong Yuan Ling, 真實事求是 introduced a new scoring system, where participants were rewarded with one point for every article created or improved. Bonus points were awarded for selected articles, such as DYK (did you know?), good article, and feature articles. This system has been amended every year to help promote these high-quality articles. In last year’s contest, the ratio of articles submitted between featured and all was 6%, held against the same ratio from the Chinese Wikipedia of only 0.07%. We also see an effect on did you know? as well: the daily average number of DYK articles in April 2014, or before this contest began, was 6.7; in August, it was 10.8.
The Dong Yuan Ling can also motivate new users by the score system and honor title. My own experience is a great example: I became a Wikipedian in October 2009 but only had a few edits until I found the Dong Yuan Ling in the summer of 2009, and I signed up. The score-system changed my editing-strategy to improve every single article I wrote as much as I could.
Of possible greater importance, I started to talk, discuss and collaborate with other Wikipedians during that Dong Yuan Ling. Apple Pie is one of Wikipedians that impressed me; he gave advice when I translated articles on US cities and a lot of help since I didn’t fully understand how to edit Wikipedia. User:苏州宇文宙武—a history-loving student majoring in Arabic and one of the earliest Chinese Wikipedians—encouraged me when I felt tired. I made a lot of friends and learned many ideas about Wikipedia, and my Wikipedia “addiction” began.
Dong Yuan Ling is coordinated by several users called “hosts.” Some are relatively new; Alex is another new-voted host in 2015. He joined Wikipedia in December 2011 and started actively editing in mid-2012. This opportunity is his first experience in leading a Chinese Wikipedia program, and he hopes that hosting Dong Yuan Ling will help improve the weakness of Chinese Wikipedia in some professional fields.
Last year’s Dong Yuan Ling, 80 editors created or improved 759 articles in 65 days. The Chinese Wikipedia community gradually focused on diversity, so that “female scientists” became one of the topics that year. Although only 23 female scientists articles were created, with three good articles, the attempt was the first to consider the gender unbalance of the Wikipedia community. Unfortunately, that effort was not carried over this year, causing consternation from the organizers: Walter, another Chinese Wikipedia, said that “We were supposed to attract more female editors to join our movement, but few people paid attention.”
You are welcomed to join this year’s Dong Yuan Ling now.
Addis Wang, Wikimedia User Group China