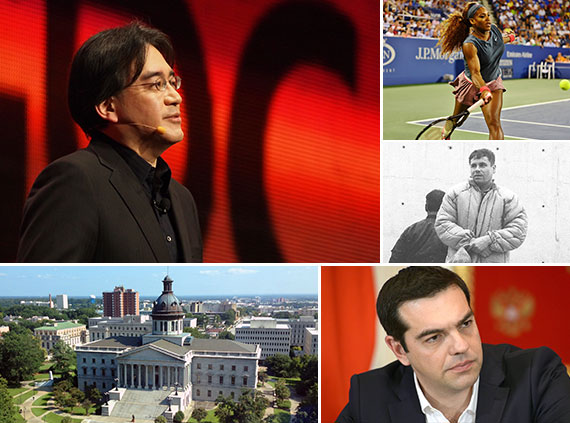 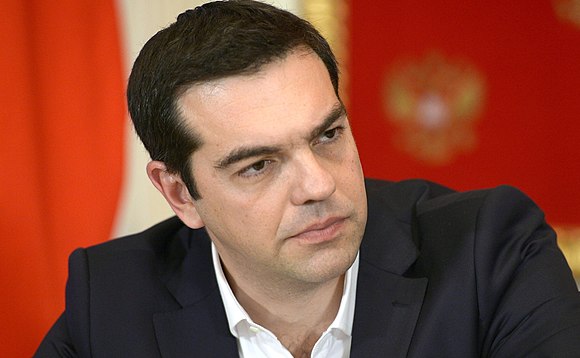 Alexis Tsipras, Prime Minister of Greece, must now persuade his government to accept the new terms. Image by kremlin.ru, freely licensed under CC-BY 3.0.
On Monday (July 13), Greece agreed to hold talks on a third bailout deal with their creditors, following last week’s national referendum which rejected proposed plans. The agreement, which was the result of a long and drawn-out negotiation process which concluded in the early hours of the morning, may secure Greece a 86 billion euro bailout over three years should Prime Minister Alexis Tsipras’ government agree to the plans. Syriza’s coalition partners, the Independent Greeks, are opposed to the new plans. Tsipras has until Wednesday to gain the support of his government on the new terms.
Learn more in these related Wikipedia articles: Greek government-debt crisis, Third Economic Adjustment Programme for Greece, Greek withdrawal from the eurozone

Serena Williams, pictured at the US Open, claimed her sixth Wimbledon title with her win this week. Photo by Edwin Martinez, freely licensed under CC-BY 2.0.
Tennis’ most famous tournament, the Wimbledon Championships, ended this week; Serena Williams, the top-ranked woman in the world, defeated 20th-seeded Garbiñe Muguruza of Spain in the final. It was Williams’ sixth Wimbledon and 21st Grand Slam title. In the men’s competition, Novak Djokovic of Serbia, likewise the top seed, defeated Switzerland’s Roger Federer in four sets. This prevented Federer from securing his eighth title, and landed Djokovic, the defending champion, his third.
Learn more in the related Wikipedia article: 2015 Wimbledon Championships

Joaquín Guzmán Loera is seen here in 1992. Photo by Fabrizio León Diez, freely licensed under CC-by-SA 4.0.
Joaquín Guzmán Loera, head of the Sinaloa Cartel and widely nicknamed “El Chapo”, broke out of Federal Social Readaptation Center No. 1 on Saturday (July 11). He did so through a tunnel dug through his shower area, connected to a construction site almost a mile from the prison. His tunnel was equipped with artificial light, air conditioning, and a modified motorcycle. His escape triggered a manhunt in the area, which has since spread to various other federal entities and Mexico City International Airport. Several prison staff were detained for questioning or fired in relation to the escape.
Learn more in the related Wikipedia article: Joaquín Guzmán Loera 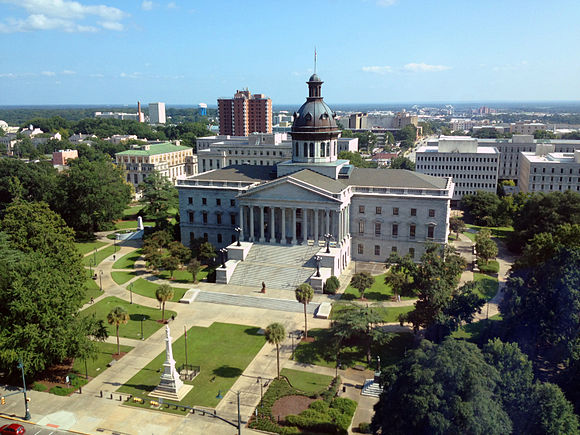 The flag had flown on or near the South Carolina State House since 1962. Image by HaloMasterMind, freely licensed under CC-BY-SA 3.0.
The US state of South Carolina removed the Confederate battle flag from near its State House on Friday (July 10) following votes in favor in both the South Carolina Senate and the House of Representatives. It comes following an attack on a church in the city of Charleston, in which nine people were killed by a white supremacist. Governor Nikki Haley had called for the flag’s removal on June 22, four days after the shooting; she said: “We are not going to allow this symbol to divide us any longer.” The flag will eventually be put on display at a museum elsewhere in the state.
Learn more in these related Wikipedia articles: Modern display of the Confederate flag, Charleston church shooting

Iwata had been president of the company for almost thirteen years. Photo by GDC, freely licensed under CC-BY 2.0.
Satoru Iwata, the President of Japan-based video game company Nintendo, died on Saturday (July 11) from a bile duct growth at the age of 55. Iwata had been forced to miss 2014’s E3 conference due to ill health, but had had surgery and said he was “progressing well”. Iwata joined HAL Laboratory as a game developer in the 1980s, joined Nintendo as a director in 2000, and succeeded Hiroshi Yamauchi to become the fourth President of the company in 2002. He oversaw many of Nintendo’s recent console releases, such as the Wii, the Nintendo DS and the Gamecube.
Learn more in the related Wikipedia article: Satoru Iwata

Wikipedia pageview statistics show the various spikes in activity on these articles. Image by Joe Sutherland, freely licensed under CC-BY 4.0.
“El Chapo’s” prison break in Mexico proved a popular story in the media, and helped to attract a peak of over 150,000 readers to his Wikipedia article two days after the escape (July 13). It was the second most-viewed of the five articles, with the next most-popular read being that of the 2015 Wimbledon Championships. The tennis contest never could achieve the peak it experienced upon the tournament’s start, though it leaped up to over 27,000 page views on Sunday (July 12).
The Greek government-debt crisis article attracted 43,000 page views at its peak last week, but declined all week as talks dragged on. Its stats were still reasonably high despite the steady decrease. Modern display of the Confederate flag, where South Carolina’s decision to remove the battle flag from in front of its State House was documented, attracted 11,000 views as it was removed on Thursday (July 9).
News of Nintendo’s president Satoru Iwata’s death on Monday (July 13) led hundreds of thousands of people to read about him on Wikipedia; the article received 471,000 hits as news of his passing broke.