An Indo-Aryan language, of the Indo-European family of languages, Konkani is the official language of Goa. It is a minority language in other Indian states, such as Maharashtra, Karnataka, northern Kerala, Dadra and Nagar Haveli, and Daman and Diu. It is spoken by about 7.4 million people.

Konkani can be written in five different scripts: Devanagari—officially used by the Government of Goa—as well as Latin (locally known as Romi Konkani), Kannada, Malayalam, and Persian. Of these, the Goan Antruz dialect of the language, in the Devanagari script, is considered standard by the Indian constitution. 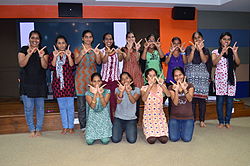 The Konkani Wikipedia has many heroes, as we see them. Melissa Simoes and Darshan Kandolkar are two of the many long-term contributors who joined during the Konkani Wikipedia @ Goa University program and are still active even after the program formally concluded. Darshan is an assistant professor at the Government College Pernem in Goa. His professor at Goa University, Dr. Madhavi Sardesai—who passed away last year—played a vital role in inspiring him to go for higher studies in Konkani. Darshan realized that there is a lot to be written in Konkani when he was introduced to Wikipedia, and after that, he became dedicated to contributing to the project.

“I would like to bring more students as contributors to our Konkani Wikipedia,” Darshan says. “My aim is to start with my students at Government College Pernem. Being an alumnus of Goa University, I also want my juniors there to join our community and enrich Konkani Wikipedia.”

“I have a dream to start a project for the freedom fighters of Goa and involve a diverse set of people, from students to journalists and columnists. I also want to build partnership with educational institutions so we could engage with the students for a longer run and the existing Konkani community could mentor them,” he continues.

“Being a new Wikipedia project, Konkani Wikipedia needs more quality measures and the articles have to grow to good quality articles with more images and templates, I want to take it to the level of English Wikipedia with both quantitative and qualitative growth in articles!”

The Konkani Wikimedia community has been using social media actively to promote the Konkani Wikipedia project, and to celebrate the successes of its contributors. After Melissa became the top contributor to the project, her fellow editor Luis Gomes congratulated her. That brought Melissa into the spotlight, gaining the attention of editors from the global Wikimedia community. The community is continuing a tradition to rewarding the most prolific contributor of each month as the “Wikipedian of the Month”.

Melissa was introduced to the Wikipedia program at her university where the target for each participating student was to write one article each about a village in Goa. “I wrote my article just for the sake of the marks, but never bothered to think about why I am writing it. After the program was over, I became inactive on Wikipedia.

“After some time, I met Father [Luis Gomes] in parish and then Darshan and Father inspired me to resume editing. Then, it became an addiction and I never stopped even for a day. I would come back from work and sit in front of my computer.

“Now, I am a teacher, and my fellow teachers are mostly women. I would like to introduce the Goan Konkani Wikipedia to them so they could also contribute to Wikipedia,” Melissa says. 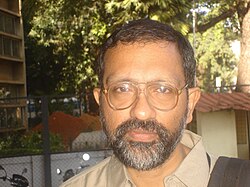 Frederick Noronha is a Wikimedian from Goa, India and has been active in many Wikimedia projects. He has been an early advocate for proposing the Konkani Wikipedia. Photo by Humanist Joyson Prabhu, freely licensed under CC-BY-SA 3.0.

“I am not a great contributor or even a language expert. I come from a content background and found my interest in Wikipedia, Wikimedia Commons and Creative Commons long ago. But this helped me to associate myself in some way with the Konkani Wikipedia incubator. I am happy that CIS-A2K chipped in to help build a community and help it grow in collaboration with the Goa University.

“Students of the Konkani department in the university are the real heroes to take this effort forward by filling the Wikipedia incubator with more editing activity to which the institutional backing acted as catalyst,” he added.

Fredrick feels there are major challenges that the community now has to start taking measures for: “The macrolanguage is written in multiple scripts. Out of five of the scripts three—Devanagari, Romi/Latin and Kannada—are actively used in printing and publication currently. People using all the scripts should be equally participating in a movement like Wikipedia to take their languages to other native speakers using Wikipedia as a digital tool.

“The second challenge is with the contributors. Goa, being home to majority of the Konkani language speakers, has English education from the primary level. This means many have a great level of technical ability. The technical contributor community here would be of great use to Konkani Wikipedia if tapped,” he adds.

“The technical contributors are eager to contribute but have not been approached in a manner that would interest them. Similarly the Konkani authors who are helping propagate the language to masses have sadly no or very little clue about Wikipedia’s existence in Konkani. This disparity is stopping a massive flow of local encyclopedic content to the Konkani Wikipedia. Unless we tap into the technological and the linguistic groups it will be only a tip of the iceberg.”

Fredrick explains that the the current Konkani Wikipedia community is primarily made up of students of Goa University. “This is both good and bad,” he says. “Having young and enthusiastic students as Wikipedia editors is helping the project to leap forward, which might not have happened if the faculty were targeted instead. There is, however, a great need for diversification.

“The approach to bring in authors in the 60–70 years age group will vary from the approach to bring in, for example, technical people. Our outreach strategies should ultimately fulfill both the literary and technological contributors, so that their work can help us to both grow content and to solve the problem of the multiple scripts, respectively,” Fredrick adds.