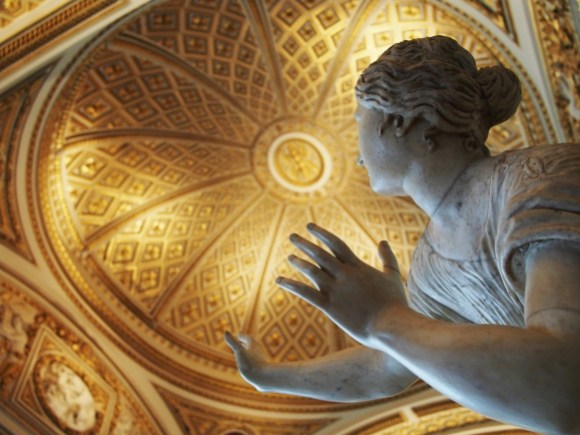 Daughter of Niobe statue in the Uffizi gallery. Photo by Petar Milošević, freely licensed under CC BY-SA 4.0
Today, we are happy to announce that the court of Rome has ruled in favor of the Wikimedia Foundation. MOIGE (Movimento Italiano Genitori, which translates as the Italian Parents Movement) is a self-described Italian social promotion organization for the protection of children. The group filed a lawsuit in Rome against the Wikimedia Foundation in March of 2011, aiming to have statements concerning its views on sensitive or controversial social topics removed from its Italian Wikipedia page.
MOIGE charged defamation because they claimed to have removed the information from their website a few years prior and no longer wished to be associated with those views. They argued that MOIGE had the “right to be forgotten” and that the content should be deleted because it damaged their image, name, and reputation. MOIGE sought €200,000 plus legal fees, removal of allegedly defamatory content, and publication of the sought-after judgment against the Wikimedia Foundation on the MOIGE Wikipedia article and Italian national newspapers.
The Wikimedia Foundation responded by explaining the Foundation’s role as a hosting provider, why the challenged statements about MOIGE were not defamatory, how MOIGE should have attempted to amend the statements, and why the “right to be forgotten” was inapplicable in this case.
After a four-year proceeding, the court of Rome ruled in favor of the Wikimedia Foundation.[1] The judgment (translated from the original Italian) confirmed the Foundation’s role as hosting provider, its neutrality in relation to the content created by its users, and the Foundation’s lack of liability for such content. The court recognized that the proper method for amending Wikipedia pages is to follow the procedure available on the website, not by asking the hosting provider to make requested changes.
The opinion stated: “it is clear that the hosting provider is in a neutral position with respect to the content of the information drafted by its users … And such neutrality of the hosting provider does not disappear just because the [Wikimedia Foundation], when informed of potentially illicit content of some of the material uploaded … may intervene to remove it.”
According to the court, Wikimedia Foundation, as hosting provider “provides a service which is based on the freedom of its users to draft the pages of the encyclopaedia: such freedom… is counterbalanced by the possibility for every user to amend or remove any content”.
The court recognized the effectiveness of Wikipedia’s model, noting “the page of the encyclopaedia dedicated to the MOIGE … has been modified many times since the start of the proceedings until today, … and this provides evidence of the described functioning of the encyclopaedia (which follows the so-called ‘wiki’ model) and of the suitability of the system developed by the [Wikimedia Foundation] to ‘self-correct’ pages through the amendments made by users.”
Wikipedia belongs to you, the global community who created it and continues to make it flourish. Wikipedia’s neutrality depends on the ability to stay uninfluenced by attempts to circumvent community policies and procedures through lawsuits. This ruling is a victory for all Wikipedians and for freedom of speech on the Internet.
Michelle Paulson, Legal Director*
Geoff Brigham, General Counsel
*We would like to extend our sincere thanks to the attorneys at Hogan Lovells in Italy, particularly Marco Berliri, Marta Staccioli, and Massimiliano Masnada, for their exemplary legal representation and dedication to the Wikimedia movement. Special thanks to Christine Bannan, WMF legal intern, for her assistance on this blog post.