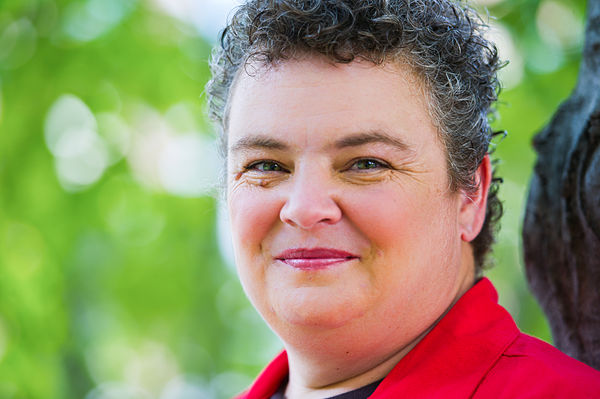 Leigh Thelmadatter photographed for the 2012 Wikimedia Foundation fundraising campaign. Photo by Karen Sayre for the Wikimedia Foundation, released under the CC BY-SA 3.0 license.
“I think that Wikimedia and similar movements offer at least the idea that we can make more information available more easily to more people,” says Leigh Thelmadatter. For an education professional like her, these are certainly not words without meaning.
“In Mexico, the issue isn’t really so much money, as the country is not all that poor. The issue is promoting the value of becoming actively involved in making the changes you want to see happen,” Leigh continues. “It’s one thing to say that the world should see Mexico as more than just beaches and the Mexico-US border, but quite another to work to make that information available yourself rather than thinking that ‘authorities’ should do this.”
A Wikipedia contributor since 2007, Leigh is a Regional Ambassador for the Wikipedia Education Program in Mexico and an English as a Foreign Language professor at the Tec de Monterrey, one of the biggest multi-campus universities in Latin America. She is also a contributor to this blog and a coordinator at Tec de Monterrey Wiki Learning, an officially recognized Wikimedia user group operating at the university.

Leigh’s beginnings with Wikipedia are directly related to her life of a self-professed vagabond. Born in New York, she has also lived in New Jersey, Massachusetts, California, Texas, Arizona, abroad in Germany, and finally moved to Mexico in 2003. “After a few years here in Central Mexico, I found I needed to improve my Spanish and get a better understanding of what was around me,” she recalls. “I put these two things together and started reading in Spanish about the towns I experienced—as the best and often only information is available in this language—and writing Wikipedia articles in English.” Thinking back to her first days as a Wikipedian, she says, humbly, “In 2007, the coverage of Mexico on the English Wikipedia was atrocious. Today, I like to think it is a bit less so.”
Once Leigh got started, she continued to edit both from personal and professional motivations. “Personally, I like the idea that I can do something not too many people can do: write about Mexico in English and about topics that most [people from outside of the country] don’t think about exploring. I know these articles are read, and hopefully they help people get a fuller understanding of Mexico and its culture.”
As for the professional level, Leigh says that working with Wikipedia gives her a kind of niche. “Tec de Monterrey has 32 campuses around the country, and I am known as ‘the Wikipedia teacher’ at least at the Mexico City area campuses and at the main campus in Monterrey. Collaboration with the Tec allows me to experiment with activities I could not do on my own, for example animation and video, and to work with entities such as the Festival Internacional Cervantino and the Tec’s library at the Mexico City campus where we organized a mega-edit-a-thon last March.”
During her almost 8 years as a Wikipedian, Leigh has written over 750 articles on the English Wikipedia, mostly about topics in Mexico. She even admits to having persuaded her husband, Alejandro, to contribute to Wikipedia, too; together they travel the country in search of subjects to cover on Wikipedia. “Most of our weekend and vacation trips are now wiki-expeditions. Alejandro takes pictures and I take notes and write articles later. Our last expedition was to Uruapan, Michoacán, to see the city and its annual Domingo de Ramos handicraft fair.”
Leigh’s work on Wikipedia is far from finished. “I’m generally not keen on talking about future plans in detail; I guess I’m just a little superstitious. I will say, however, that there is some promise in our current video projects, and in collaborations with local governments for students and any Wikimedians who want to work with us. In September, we will organize a wiki-expedition for about 70 participants, likely covering the Mexico City boroughs of Xochimilco and Tlalpan.” She also hopes to increase online support from the Spanish Wikipedia community, calling her fellow Wikimedians to action, particularly for those who’d like to mentor students during their work on Wikipedia. “A few have already started doing this, and I’m really thankful to Jarould in particular for his support.”
Speaking about the future of the Wikimedia movement, Leigh says: “I believe that much of Wikimedia’s future, especially the writing and maintenance of Wikipedia articles, will lie with the Wikipedia Education Program and GLAM collaborations. There is simply no way to get collaboration with the people who have the kinds of knowledge and skills that we need without these programs. We will need to find a way to provide credit, similar to that of having research published, and maybe for specialized articles, we’ll need to have some protection for a particular version—similar to what James Heilman did with the dengue fever article that was published in the Open Medicine journal in October 2014.”

Leigh’s reports on the work of the Tec de Monterrey Wiki Learning can be read on this blog.