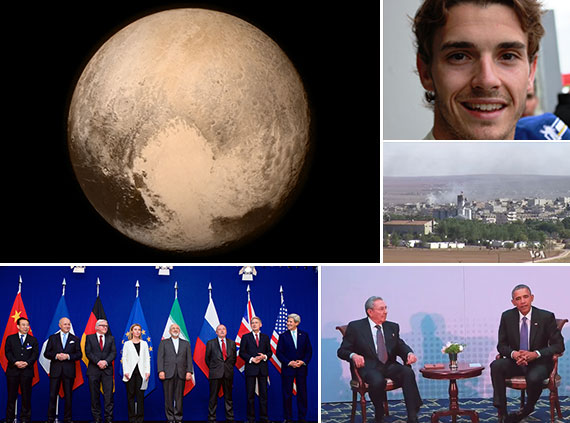 The new images of Pluto taken by New Horizons are helping scientists learn about the dwarf planet. Image by NASA, in the public domain.
NASA‘s New Horizons probe became the first space probe to visit Pluto on Tuesday (July 14). The probe took several photographs of the dwarf planet, as well as its moon Charon, as it flew past. The probe came within 7,750 miles (12,472 km) of the surface of Pluto, the closest a probe has ever been to the planet, and its findings should allow researchers a clearer understanding of the planet’s makeup and geographic features.
Learn more in these related Wikipedia articles: New Horizons, Pluto

The agreement had been under debate for years by the involved parties, and finally signed in Vienna. Image by United States Department of State, in the public domain.
The P5+1 countries—a group made up of the UN Security Council‘s five permanent members, namely China, France, Russia, the United Kingdom, and the United States, plus Germany—reached an agreement with Iran on Tuesday (July 14) surrounding the country’s nuclear weapons. The Joint Comprehensive Plan of Action was signed in Vienna following years of negotiation, and sees Iran cut down on various aspects of its nuclear capabilities in exchange for santion relief.
Learn more in these related Wikipedia articles: Joint Comprehensive Plan of Action, Nuclear program of Iran

Bianchi, pictured here in 2012, was the subject of hundreds of tributes from his fellow professionals. Image by Henry Mineur, freely licensed under CC-BY-SA 3.0.
Formula One driver Jules Bianchi died on Friday (July 17) following an incident at the 2014 Japanese Grand Prix. Bianchi had been in a coma in a hospital in his hometown of Nice, France, since the incident in October, in which he lost control of his car in wet conditions and collided with a recovery vehicle. He is the first Formula One driver to be killed as a result of an accident during a race event since Ayrton Senna’s death during the 1994 San Marino Grand Prix.
Learn more in the related Wikipedia article: Jules Bianchi 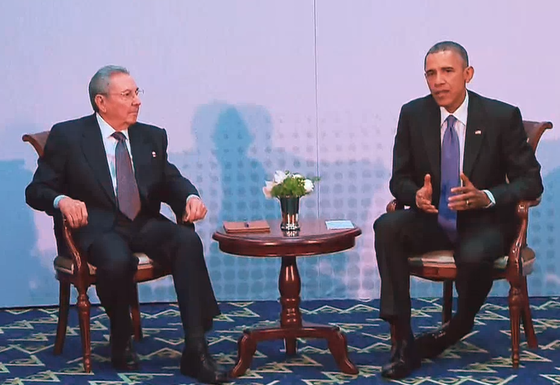 Relations between the countries had been all but destroyed by the Cold War. Image by the United States Government, in the public domain.
The United States and Cuba, who severed ties in 1962 during the Cold War, officially reopened diplomatic relations on Monday (July 20). The so-called “Cuban Thaw” began in December last year, as Barack Obama and Rubén Castro announced plans to rebuild their nations’ relationship following months of secret talks, apparently also involving Pope Francis.
Learn more in these related Wikipedia articles: Cuban Thaw, Cuba–United States relations 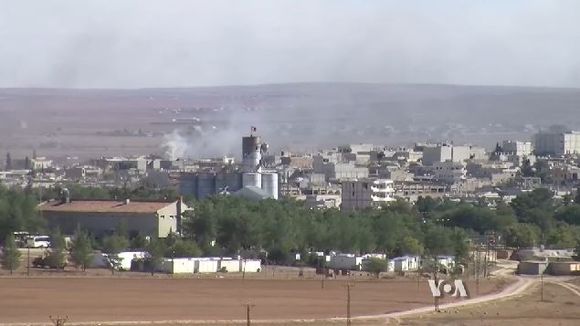 The targeted victims were gathered for a press statement on the rebuilding of Kobanî, seen here. Photo by VOA, in the public domain.
A bombing in the Turkish district of Suruç, Şanlıurfa Province—on the border with Syria—on Monday (July 20) killed 32 people and injured 104. The bombing targeted members of the youth wing of the Socialist Party of the Oppressed, the Socialist Youth Associations Federation. They were listening to a press statement on the rebuilding of Kobanî, a Syrian city around ten kilometers from Suruç that had been under the control of Islamic State of Iraq and the Levant forces. The latter group later claimed responsibility for the attack.
Learn more in these related Wikipedia articles: 2015 Suruç bombing, Syrian–Turkish border incidents during the Syrian civil war 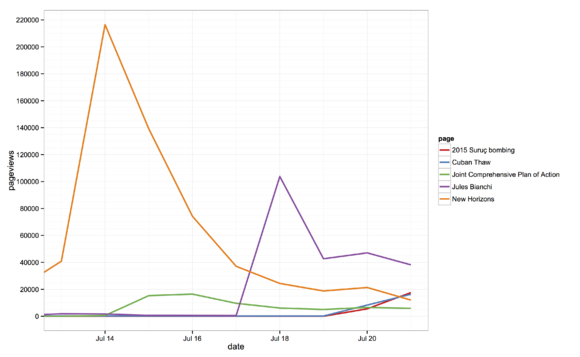 Wikipedia pageview statistics show the various spikes in activity on these articles. Image by Joe Sutherland, freely licensed under CC-BY-SA 4.0.
Clearly, NASA‘s flyby of former planet Pluto with its New Horizons probe was the most popular article in this week’s roundup, likely helped by the dwarf planet’s appearance on the homepage of the English Wikipedia to commemorate the event. It attracted almost 220,000 page views on July 14 as the probe passed by.
Jules Bianchi‘s tragic and untimely passing led to many looking him up on Wikipedia, with nearly 105,000 people visiting his biography on July 18 as the news broke. The other three stories, in fact, were not nearly as accessed as his biography was; the article on the “plan of action” on Iran’s nuclear weapons was read by around 18,000 upon its signing last week.
The last two articles also hover around the 18,000 page view spike mark, and are both new creations as of this week. Both the terrorist bombings in Suruç and the newly coined “Cuban Thaw” spiked on July 21.