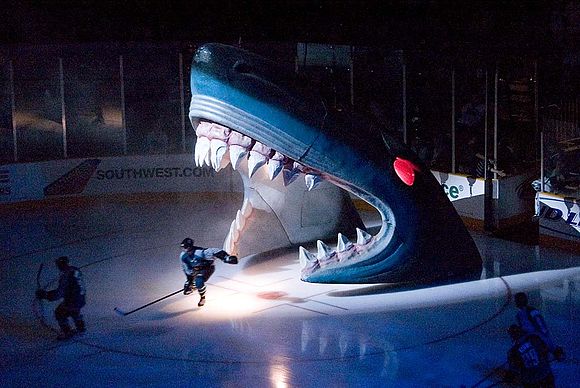 San Jose Sharks’ pre-game entrance before the game against the Columbus Blue Jackets on March 16, 2007. Kunal’s first edits to Wikipedia were made to the article about the 2006–07 San Jose Sharks season a month later. Picture by Eliot a.k.a. pointnshoot, freely licensed under CC-BY 2.0.
For Wikimedia Foundation software engineer Kunal Mehta, it’s all due to hockey. “I discovered Wikipedia through Google, and started using it directly for looking up various sports statistics and other general knowledge. I soon discovered that they weren’t always up-to-date and started updating them myself after the hockey games I watched.”
A native of San Jose, California and an avid Sharks fan, Kunal—also known by his nickname Legoktm—credits his Wikipedia beginnings with a thirst for hockey knowledge. “When I first started editing Wikipedia in 2007, I was really into hockey, so I mainly edited hockey-related articles. Eventually, I found my way to the meta side to the project, discovered AWB, and got my first bot approved. I soon found out about pywikibot, and tried writing a custom bot to automatically write articles about hockey players—except I didn’t know Python.”
A self-described free and open knowledge enthusiast, Kunal wasn’t about to give up. He learned programming in Python from the Python Programming book on Wikibooks and started running bots to perform tedious and mundane edits to improve Wikipedia. However, it wasn’t until late 2012 that Kunal got truly involved with MediaWiki, the software that’s powering Wikipedia. “I got frustrated that AbuseFilter bugs that I had reported weren’t being fixed and tried to fix them myself. I say ‘tried,’ because my first patch had a syntax error in it and partially broke the AbuseFilter for 30 minutes after being deployed.” 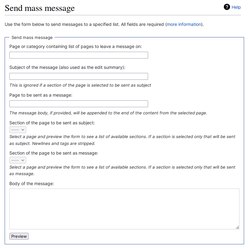 MassMessage, written by Kunal, provides a simple interface to sending notices, newsletters and other publications to a mass audience. It is currently used to deliver Wikipedia Signpost. VisualEditor newsletter, Tech News, and others. Screenshot by MZMcBride, public domain.

Over the years, Kunal changed his role from a bot operator to an active developer, helping to rewrite pywikibot to its current version, as well as creating and maintaining several MediaWiki extensions. “I’m still partial to MassMessage, which was the first major MediaWiki project I worked on”, he says. “At first, I didn’t know what I was getting myself into until Siebrand Mazeland talked with me during the 2013 Wikimania in Hong Kong and explained the things I’d need to do—and find other people to help me with—to get it deployed.” After a summer’s worth of work, the extension was enabled on Wikipedia, and is currently being used to deliver important community-wide notices, newsletters, and other publications, including the English Wikipedia’s Signpost and Tech News.
Looking back at that time, Kunal says: “Seeing my name on Special:Version—a page that lists people who wrote MediaWiki and its extensions—next to some awesome people that I looked up to was an amazing feeling. MassMessage is still my favorite because it got me deeply involved into development, and I had to work with different parts of MediaWiki to put it together. When people have questions, I can often point them to a code sample in MassMessage to show how we worked around or fixed something.”
In addition to his daily work at the Wikimedia Foundation, Kunal has been giving back to the community by coaching new MediaWiki developers. In 2014, he mentored two Google Summer of Code projects which allowed email bouncing in MediaWiki and improved target list handling in MassMessage, and is currently co-mentoring a tool called crosswatch that aims to create a much-requested watchlist for multiple Wikimedia projects in one page. “We could really use some testing from editors,” Kunal says, inviting people to report suggestions and problems with the new tool.
As we neared the end of our interview, I asked Kunal about the good and the bad in MediaWiki. True to his own admission of “not being a good writer,” he provides me with a bulleted list of things that are “concerning”: a growing gap between editors and developers, the popular misconception about MediaWiki being “the thing that powers Wikipedia” instead of “the free and open source software that also powers Wikipedia,” and the sad fate of useful features that reach beta stage but end up being abandoned.
On the “awesome” side, Kunal lists the continued work on improving MediaWiki’s architecture and the much-awaited VisualEditor, which provides a WYSIWYM (“what you see is what you mean”) interface to editing Wikipedia.
Tomasz W. Kozlowski
Wikimedia community volunteer