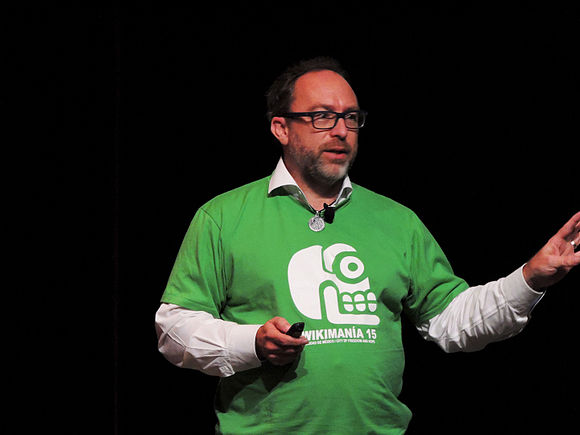 Jimmy’s announcement is tradition at Wikimania. Photo by MadriCR, freely licensed under CC-BY-SA 4.0.

It is a Wikimania tradition that Wikipedia founder Jimmy Wales announces his “Wikipedian of the Year” during his closing keynote at Wikimania, the annual gathering of Wikimedia editors from around the world, and his speech at this year’s Wikimanía was no exception.

Susanna Mkrtchyan, board member of Wikimedia Armenia, was the first named honoree of the evening. Photo by Victor Grigas, freely licensed under CC-BY-SA 3.0.

He did, however, depart from this tradition in one respect: instead of specifically naming a Wikimedian of the Year, Wales instead named them in pectore. This was a reference to the term used initially by the Catholic Church to denote an appointment made “in the heart” without announcing the appointee’s name, because doing would likely cause harm to or reprisals against the appointee.

Wales’ larger closing speech covered freedom of expression issues, a major aspect of this year’s conference, including censorship of Wikipedia within China and how this was impacted by the Foundation’s recent decision to move all Wikimedia sites to HTTPS.

He also spoke of an editor in Venezuela, exiled by his country for publishing photos of anti-government protests to Wikimedia Commons. He had his passport revoked, and was thus stranded outside the country with little knowledge of his legal standing and refugee status. Wales’ Wikipedian of the Year, though secret, likely reflects the risks undertaken by his Venezuelan exemplar. Jimmy said he hopes to “one day be able to share this person’s story”.

Beyond his in pectore Wikipedian, Wales provided several honorable mentions.

Susanna Mkrtchyan, board member of Wikimedia Armenia, was the first honoree named. An “innovative, collaborative, and collegial” Wikipedian, Susanna has been heavily involved with off-wiki activities in Armenia. She was behind the very successful “One Armenian – One Article” campaign, as well as WikiCamp—an intensive youth camp focused on training new editors in Wikipedia and Wiktionary editing through hands-on means.

Satdeep Gill is among the top five contributors to the Punjabi Wikipedia. Number one is his father, whom Satdeep introduced to Wikipedia. Photo by Victor Grigas, freely licensed under CC-BY-SA 3.0.

Satdeep, a “collaborative, inspiring, and tireless” Wikipedian, recently finished the #100wikidays challenge on his home wiki, improving articles on topics ranging from “Judith Butler“, through “Popeye the sailor man” and “stream of consciousness“, to, fittingly, “Teotihuacan“.