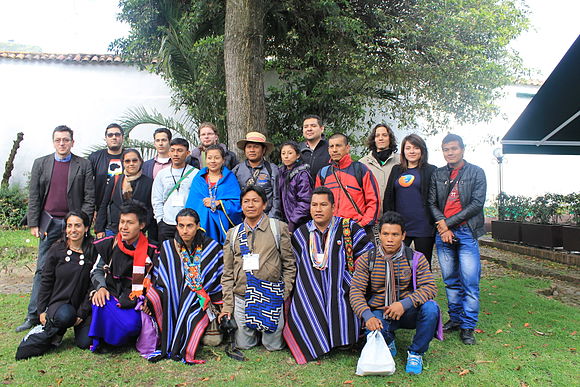 The group of the participants. Photo by Diego F. Gómez, freely licensed under CC-BY-SA 4.0.

The User Group Wikimedistas de Colombia gathered this past June in Bogotá, Colombia, to begin discussions on the ways Wikipedia can be used to document and share endangered indigenous languages in the country. Indigenous language speakers came from all over Colombia to share their experiences, knowledge, and resources to help.

Colombia is a multicultural country where at least 65 indigenous languages are still spoken, besides two creoles (palenquero and raizal) and romaní. The problem we face is that indigenous languages are only considered official languages in their respective territories of the country. If an indigenous speaker wants to pursue education outside of their native region, they more often than not have to head into the cities, where Spanish will be the official language. Furthermore, media, internet technologies, and most other forms of communication take place in Spanish, meaning native indigenous language speakers use their native tongue less and less. In fact, some indigenous groups have only a select few native language speakers remaining.

With the issue only growing, gatherings of indigenous language speakers have become quite common in Colombia as a way to find solutions to keeping these languages alive. The Wikimedistas de Colombia, however, brought something new into the conversation. This marks the first indigenous language gathering in which digital activism and new technological tools are being introduced as a way to preserve these languages.

Recognized as an official user group in June 2014, the Wikimedistas de Colombia, banded together with 15 digital activists of indigenous languages and a chapter member from Wikimedia Venezuela to participate in a talk and workshop over the course of two days. The chapter member from Venezuela served to bridge the gap between the countries, serving as a native speaker of Wayuu (a language shared between Colombian and Venezuela) and one of the editors at the Wayuu Wikipedia Incubator. The event was organized by several institutions dedicated to improving digital resources and preserving Latin American culture, including Global Voices, the Caro and Cuervo Institute, Muysccubun, and Hivos.

The first talk was led by me, Sahaquiel9102, and introduced Wikipedia, the movement, and the current work done by Wikipedians in the area. I also proposed a few ideas on how to use Wikipedia’s structure and capacity to curate, share, and preserve knowledge in indigenous languages.

All attendees were also asked to contribute to the talk and a workshop during the two-day meeting. Participants brainstormed the potential impact Wikipedia could have on the indigenous languages of Colombia, including the use of the site as a way to help younger generations of indigenous language speakers access articles and media in their own languages. This would help bridge the gap between indigenous languages and education, where Spanish dominates the classroom as the spoken language.

During the workshop, attendees were encouraged to begin thinking about ways to put this idea into action, the Incubator being the principal solution offered. (The Incubator is where potential Wikimedia project wikis can be developed, arranged, and tested before being launched). A demonstration featured two projects that have now been developed in the Incubator: The Wayuu and the Nasa Yuwe Wikipedias. The workshop aimed to give a basic tutorial on how to edit Wikipedia using the wiki-code and the Visual Editor, upload photos and media to Commons, and illustrated how the use of open licensing helps to keep knowledge free for everybody to use.

Digital activists and Wikimedians alike were encouraged to continue adding to the Wayuu and the Nasa Yuwe incubator projects and keep brainstorming more ideas for future collaboration. Another meeting is planned for next year to keep these conversations going.

Wikimedistas de Colombia plans to be a part of the next meeting, and we look forward to building new relationships with other individuals who might be interested in using Wikipedia to preserve languages and cultural heritage of Colombia.