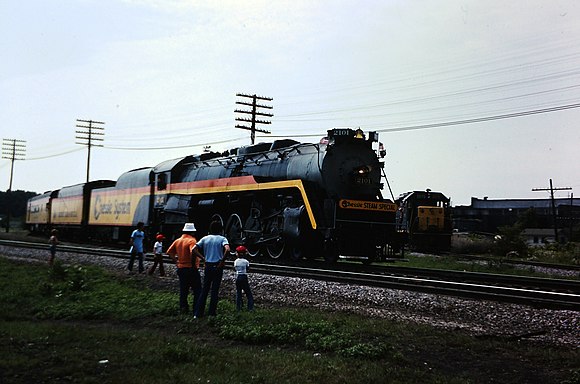 Michael Barera’s father and grandfather were both prolific railroad photographers, and now their imagery is accessible to the world. Here, the Chessie Steam Special with ex-Reading Railroad #2101 pauses at Plymouth, Michigan (July 1977). Photo by Lawrence and David Barera, freely licensed under CC BY-SA 2.0.
Once when I was young, growing up in the 1990s, my father pulled his collection of railroad slides out from the basement, set up his projector, and shared a glimpse into American railway history with our family. I was too young to remember the slides distinctly, but I do remember being really impressed by them.
Many years later, a sequence of seemingly unrelated events would lead me back to these slides and a vision for digitizing them. In 2013, while I was the Wikipedian in Residence at the Gerald R. Ford Presidential Library, I met Edward Vielmetti for a conference panel on the relationship between wikis and libraries. Before the panel, he introduced me to ArborWiki, a LocalWiki for all things related to Ann Arbor, Michigan. Then, while I was attending an ArborWiki meetup in 2014, I met David Erdody, who runs an analog-to-digital media conversion service called A2Digital. After learning that he had the equipment and expertise necessary to digitize slides, I immediately thought back to my father’s collection and the possibility of digitizing it.

The slides themselves were taken both by my father (David) and his father (my grandfather, Lawrence). Most were created in the Midwestern United States, especially Michigan, Indiana, and Illinois, chiefly during the 1960s and 1970s (although one photograph of an Ann Arbor Railroad Steam Special dates back to circa 1950). Their featured subjects are largely passenger trains, and due to their dates of creation they document both the last decade of private passenger rail service in the United States and the early years of Amtrak.
According to my father, the majority of the photographs were taken by my grandfather, who was an avid amateur photographer; however, both my father and my grandfather would often go railfanning together, making it impossible to discern who took each individual photograph in most cases. For this reason, all of the digitized photographs credit “Lawrence and David Barera” as the photographer. However, because my father is my grandfather’s legal heir, he controlled all of the copyrights to the entire collection, including for those photographs taken by his father.
I eventually decided to have the slides digitized as a Father’s Day gift for my Dad, after which I agreed to terms with Erdody and handed off all of the slides to him. Initially, I thought about this project as simply a way to make the slides conveniently accessible to my father, and after receiving the digital surrogates from Erdody I began uploading them to Flickr for this purpose in May 2014. While doing this, I realized that there was tremendous potential for the further sharing of these digitized photographs, so I asked my father if he would be willing to release them under a Creative Commons license so I could also upload them to Wikimedia Commons. He graciously agreed to this proposal and released them freely under the CC BY-SA 2.0 license, which is conveniently supported by Flickr. 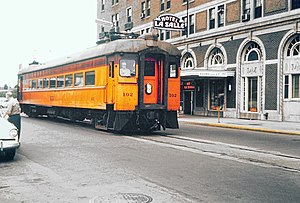 My father’s motivation for freely licensing these images was rooted in the fact that his slides had been underused prior to their digitization; in his own words, they had been “tucked away with other family artifacts” and only ever brought out of storage “every dozen years or so”. Further explaining his rationale, he noted that “I was proud of the quality of most of the photos, and thought there was no better way to honor the work of my father than to make his photos available for public use.”
In less than a year since they were uploaded, my father’s donation of 146 original images (now 151 total files, including retouched derivatives) to Wikimedia Commons has certainly benefited the Wikimedia community, as over 10% have already been added to Wikipedia articles (chiefly but not exclusively on English Wikipedia). Interestingly but not surprisingly, my father’s decision to freely license these images has also benefited him directly in the form of both subject identification and color correction, largely thanks to Wikimedians Mackensen and MagentaGreen, respectively. By voluntarily releasing his collection of railroad slides into the commons, my father has benefited from the volunteered efforts of other users while also enriching the content of both Wikimedia Commons and Wikipedia.

An Amtrak RTG Turboliner at Ann Arbor, Michigan (May 1975). Photo by Lawrence and David Barera, freely licensed under CC BY-SA 2.0.

In light of my experience with this digitization project, I believe that motivations for freely licensing older analog personal photographs are very similar to those for contemporary digital photographs, including the motivations that catalyzed my own personal photographic contributions to Wikimedia Commons back in the mid to late 2000s. The economics of their creation appear to be essentially the same, necessitating only a camera and the desire and ability to take photographs, often as a hobby; I believe that this makes the amateur analog photographer’s decision to freely release his or her images very similar to the equivalent decision made by contemporary amateur digital photographers.
The major challenge, however, is the cost and equipment required to digitize these images before they can be uploaded or freely licensed. While the cost is not insignificant, it was not prohibitive in my case—$0.50 per slide, which made it a feasible and affordable gift idea.
From my personal experience I would certainly recommend A2Digital, although according to Erdody it is a “strictly local service”; while he told me that he would be willing to “receive materials by mail from anywhere”, he also described the idea of mailing slides or similar analog materials back and forth for digitization as “very risky” (emphasis in the original). As a protective measure, he recommends that his customers deliver their materials to him by hand, which is precisely what I did. While this worked perfectly well for me as an Ann Arbor resident, it simply will not suffice for the rest of the world. 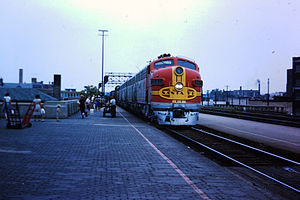 Due to the fragility of the medium in question, successfully digitizing slides nonetheless requires, as Erdody terms it, “a grassroots solution”. Asking your local library or historical society about how they digitize slides or negatives is probably the best place to start. Although not terribly common, according to Erdody, some libraries do provide lists of their digitization vendors; an example is the state-run Library of Michigan in Lansing, which maintains this webpage on the subject.
Perhaps the easiest way to locate such a service, however, is to simply search the Internet for “slide digitization” and the name of your city, town, or the nearest metropolitan area. However you find a slide digitizer, I’d highly recommend that you explore the possibility of digitizing any slides you may have of potential interest to Wikipedia and other Wikimedia projects.
In terms of the final results in my case, I think that my father said it best: “I know my Dad would be pleased and proud to know that his work was finally being enjoyed and appreciated by railfans (and others) all over the world.”
Michael Barera
English Wikipedia editor
This blog post was originally published in the Signpost, a news journal about the English Wikipedia and the Wikimedia community. It was lightly edited and several images removed for publication on the Wikimedia Blog.