Content Translation session at Wikimania 2015. Photo by Amire80, freely licensed under CC BY-SA 4.0.
Wikimania 2015, the 11th edition of the annual gathering of Wikimedians from around the world, was recently held in Mexico City. The Wikimedia Foundation’s (WMF) Language Engineering team participated in the Hackathon and Wikimania sessions, hosting several talks and two translation workshops. The primary focus was the Content Translation project—interacting with users, understanding their issues, and raising awareness about this new article creation tool.
During the Hackathon and Wikimania, the Language Engineering team members met with Content Translation users. New users were introduced to the tool and they generally provided encouraging initial feedback. Deeper discussion revealed several issues, some of which were quickly investigated and resolved. The ‘translathon’ sessions on day two and three of Wikimania were well attended and some attendees created their first articles using Content Translation. On the first day, 21 new articles were created in just an hour by 16 participants. While several issues surfaced, the participants provided suggestions that would be helpful to better support article translation. The second translathon was conducted in Spanish and aimed at Central and South American languages. The main conference sessions were not recorded, but you can view the presentation slides.

The Language Engineering team follows a three month development cycle that allows us to plan and showcase the outcome alongside the larger departmental and organizational goals. The results from work done between April to June 2015 can be seen in the Quarterly Review presentation. Highlights included making Content Translation available as a beta-feature on all Wikipedias, making it easily accessible for users, and better representation of analytics.
Until end of September 2015, we plan to do the following: 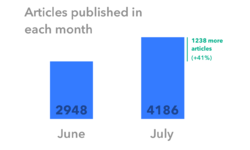 More articles are being published each day with Content Translation. Photo by Pau Giner, freely licensed under CC BY-SA 4.0.

In addition to our usual channels for communication, like the Content Translation talk page and Phabricator, we plan to host another online interaction session shortly. The last session was held in June 2015 simultaneously on Google Hangout and IRC. While we plan to follow a similar format this time, we are open to feedback on what can work best for our participants.
In addition, our UX interaction designer Pau Giner is hosting testing sessions over the next few weeks. Please sign up if you would like to participate in these sessions and provide inputs about the future features of Content Translations.
A round-up of activities from the Language team is available in our monthly report. For Content Translation, we now have a weekly newsletter of the new features and bug fixes.
Runa Bhattacharjee
Language Engineering (Editing)
Wikimedia Foundation