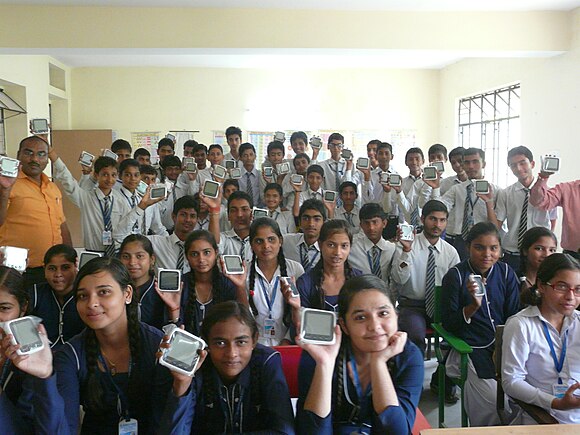 A class in Moradabad, Uttar Pradesh, India, using WikiReaders. 500 of those devices were distributed to schools in India, South Africa and Mexico, in part through a grant from the Wikimedia Foundation. Photo by Ashstar01, freely licensed under CC BY-SA 3.0.
Crowdfunding has been steadily growing as an alternative method to fund various projects and ventures on the Internet over the past few years. It has been used to successfully fund video games, a smartwatch, the renovation of a German schloss, a political action committee and, more humorously, the making of a potato salad. You can even crowdfund an online encyclopedia—and people have been doing so very generously over the past 14 years.
It is perhaps no surprise, then, that Wikimedia volunteers are increasingly embracing this way of funding their own initiatives to improve Wikipedia and its sister projects.

A female Megistocera, a genus of crane fly, photographed in Kadavoor, Kerala, India. This newly promoted quality image was taken by Jeevan Jose using gear purchased with funds from his crowdfunding campaign and was released under the CC BY-SA 4.0.

This year has seen particular activity in that regard, with three campaigns—Wikimédia France’s WikiCheese, Diego Delso’s equipment restoration and Jeevan Jose’s new photography gear fundraisers—receiving over US$13,500 in donations from the public. Following this surge, I asked some of the contributors involved in Wikimedia-related crowdfunding campaigns about the lessons they learned from them and the suggestions they might have for future crowdfunding organizers.
The most popular suggestion is to start with a feasible target. “Indiegogo have a reasonable fee if you meet your target but incur a hefty penalty if you don’t,” says Colin, one of a group of volunteers behind Jeevan Jose’s successful fundraiser that exceeded its target by over fourfold, collecting US$3,150 in total. “That really encourages you to be modest, to work out what you need rather than what is in your dreams,” he adds.
Being able to show a good track record is quite important, too. “People giving their money to non-profit projects want to see a pilot first or some track record that shows you can responsibly use their money effectively to make change in a long-term sustainable way,” says Aislinn D Grigas, organizer of the ultimately unsuccessful WikiReader distribution campaign in 2013. “Tracking success is also essential to discovering the outcome of a pilot project and determining if it is a worthy candidate for more investment.”
Colin adds that you should “make your campaign personal with photos of yourself, and to make it clear why a donation would be for a good cause and would give a good return. In our case, Jee is a very popular member of the Wikimedia Commons community, which definitely helped since many of the donations came from wiki-friends.”
Building a team of collaborators seems to be another crucial factor. “Having a team is recommended … We invited a few of Jee’s wiki-friends to help with the campaign, [and] Christian created an excellent video made from clips of Jee’s work. This really made the campaign look professional,” says Colin.
Asking for outside help is also advised by Aislinn. “One of the things I learned is to reach out to as many people and organizations as possible. Finding partners and collaborators is important and can be a great source of support and help. We didn’t initially think that a Wikimedia Foundation grant would be a match but in talking to enough people, we realized there were other sources that could supplement our crowdfunding campaign,” she finishes.
Tomasz W. Kozlowski
Wikimedia community volunteer