Emily Temple-Wood discusses lessons learned running Wikipedia workshops. You can also view the above video on YouTube and Vimeo. Video by Victor Grigas, freely licensed under CC BY-SA 3.0.
Emily Temple-Wood, a Loyola University student studying molecular biology and a veteran Wikipedia editor, is a familiar face on this blog. Last time we wrote about her in 2013, she had spearheaded the WikiProject Women Scientists and continues to contribute to various projects and articles today.
Temple-Wood has been editing Wikipedia since she was 12. She is the vice president of Wikimedia D.C., despite living in Chicago. Her work goes far beyond editing and writing: It extends to running workshops and doing outreach work. For these, she made use of Wikimedia grants—a versatile method of funding for Wikipedia-related projects.
Temple-Wood’s first project and event grant was used to run a series of workshops on contributing to Wikipedia. She said a huge lesson from running these workshops was that social media advertising was integral to boosting attendance.
“When we advertised the workshops just using flyers, only three people came,” she says. “And that was my roommate and her boyfriend, mostly because I promised them that there’d be free pizza.”
But because the grant program was flexible, Temple-Wood says her first experience running workshops ended up an invaluable learning experience stemmed from a low turnout and free pizza.
“We started off with no impact, no people and a total disaster. But I ran ten workshops, or even more,” Temple-Wood says. “In the end we had a really successful smooth model [for workshops].” 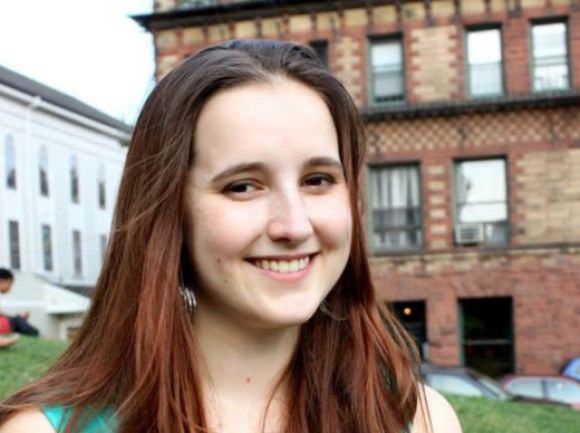 Temple-Wood has been an editor of Wikipedia since she was 12.Image by Emily Temple-Wood, freely licensed under CC-BY 1.0.
Indeed, her determination for project work shows through with her “baby”, WikiProject Women Scientists. This project, she says, potentially doubled coverage of women scientists on Wikipedia in a year and a half.
“We were missing 1,500 women scientists [in 2013],” she says. “What’s the next massive content gap we’re going to find because we engaged someone who wasn’t engaged before?”
Temple-Wood’s workshops also resulted in materials that can help others hosting similar projects to boost coverage on Wikipedia. “I’m kind of … inspiring people to teach others to focus and run workshops on things that matter to them,” Temple-Wood adds.
If you have an idea but are unsure of how to turn it into a successful grant proposal for the Wikimedia Foundation, turn to IdeaLab. It’s a place where you can meet, and get feedback from, veteran Wikipedians who can help you through the process of applying for a Wikimedia grant.
“We’re really into community collaboration,” adds Temple-Wood.
IdeaLab also supports those who are interested in Individual Engagement Grants, which is currently accepting proposals from now until September 29.
“The grant application can be about anything. That’s how fluid and flexible the grant programs are. So if there is something that you want to try, submit it to the IdeaLab,” Temple-Wood says.
For those who just want to start off small—perhaps to get Wikipedians together to discuss a new project idea, or to educate others on Wikipedia editing—Temple-Wood recommends the project and event grant, which she dubs the “buy-pizza-grants.”
“Really the three things you need for a successful workshop are Wikipedians, pizza and social media advertising,” she laughs.