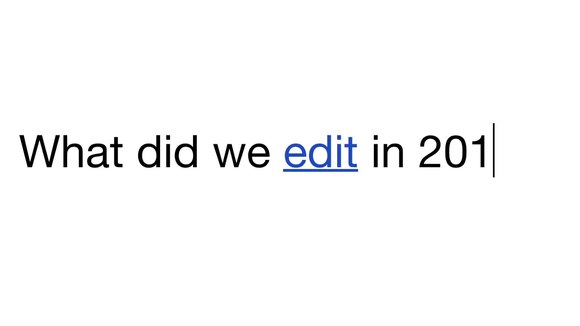 Above is #Edit2014, the first Wikipedia Year-in-Review video. You can collaborate to make #Edit2015 here. Video by Victor Grigas, freely licensed under CC BY-SA 3.0.

Last year, the Wikimedia Foundation published our first ever video year-in-review which covered some of the major news events of 2014 through the lens of Wikipedia. This year, we’re opening up the idea development and pre-production process of making a video for 2015 to everyone. This is an opportunity for you to help shape the narrative of the events of 2015.
Last year’s video was made largely by myself and another video editor over about 8 weeks at the end of 2014. I spent the first half of my 8 weeks researching news, comparing that to view and edit counts of Wikipedia pages, and searching for media to illustrate those events. After I had that media, it was a matter of taste to place them in a video editing timeline. When we published it, the press and the general population on the Internet reacted positively. All things considered, I think that #Edit2014 was a good start, and I’m happy with the final result—but I’d like to improve a few things for #Edit2015. 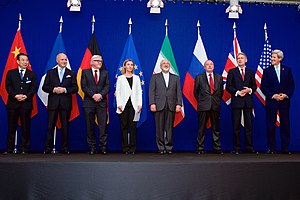 The negotiations about the Iranian nuclear deal framework has been ongoing in the international press. Photo by United States Department of State, public domain.

These images of Pluto by the New Horizons space probe made the international news. Photo by NASA, public domain.

Je suis Charlie is an example of a major global news event that was well documented with freely-licensed media. Photo by Olivier Ortelpa, freely licensed under CC BY 2.0. 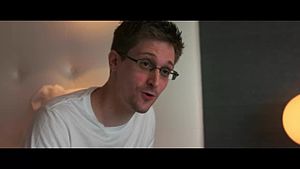 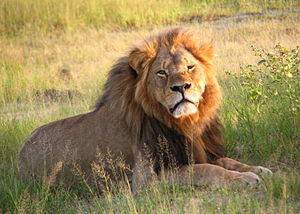 Open Collaboration: I’m opening up the whole idea-development and pre-production process (research, scriptwriting, brainstorming, finding media, etc.) for making #Edit2015 to on-wiki collaboration. While experimental, we have #Edit2014 as a guide to show that a final product can be done; it taught me that year-in-review videos cover international news events through a brand (in this case Wikipedia) by telling each news story in about 5 seconds and then cutting to the next one. After being multiplied by around 20 stories, your video will be upwards of two minutes long when the credits, logos and titles are included. If you watch other year-in-review videos (like Google Zeitgeist Year In Search) you’ll see how each will spend 5 seconds on a topic and then jump to the next.
First drafts of #Edit2014 were half global news and half wiki-world news. I wanted to showcase as many Wikimedia tools, events and projects as possible. What I found was that since this is for a wide audience, and it’s only a few short minutes long, we only have a chance to communicate one or two new ideas (for an ordinary person who uses the internet), so we had to be very selective about what was showcased. In this case, it was a chance to talk about the edit button and Wiki Loves Monuments briefly. Then we have to get back to those global shared news events that the public may have experienced. Aspects like ‘going down the rabbit hole,’ clicking link after link, was something that ordinary people were familiar with, so this is something we used to bridge stories.
The idea-development and pre-production process does not require any fancy video equipment—just a wiki page and an internet connection. I used post-it notes on my wall to organize my ideas. I think that we—that is, the Wikimedia crowd—can be very good at story development and collaboration. I’ve been collecting imagery and ideas online, and I’d like to allow anyone to use this space as a place to collaborate on this project.
An idea I had for this year is to somehow showcase the talk pages about Wikipedia articles, to show how we arrive at consensus and a neutral-point-of-view. Finding the right article(s) and talk page quotes to use to illustrate that would be key. Last year, we showcased the edit button using the 2014 Israel-Gaza conflict. For that, we see closeups of ‘citation needed’ and ‘disputed-discuss’ then we cut to the different languages of that article. Imagine if you saw a tiny fraction of the behind-the scenes talk about an article like that and how it aims for objectivity?
Rules: These are some basic criteria I made to guide what content got into #Edit2014:

As for production and post-production – Continuity, music, audio mixing, et cetera are all things that should ideally be online and in a collaborative manner but currently there is no system in place to collaborate on those things using Wikimedia projects. I’d love to develop that system, but I don’t think that it is practical for this year. I’d also like to aim to make the video as close to 2 minutes in length as possible.
Schedule: So the logical publication date for #Edit2015 is December 15th because that’s when the press, who would republish and spread the video on social media, are still at work and this is an easy story for them to publish before they go on vacation at the end of December. Getting this in the press gets more eyeballs on the video. That means that actual video editing should be well on its way in October and November. This is my current schedule (for now):

Internationalism: My biggest problem with #Edit2014 was that so much of it was in English. While we tried to cover as many regions and languages as possible, a non-English speaker probably had to watch it with the captions on—and then your eyes are stuck reading text on the bottom of the screen rather than viewing the interplay of images and text. I think that opening up the development and pre-production phase would flatten out the perspective quite a bit, or at least help to point out flaws and suggest other ideas. We shouldn’t have to rely on captions to make it universally understandable, and since we’ll be jumping from one story to the next in 5 seconds, we can express a story in any local language. There may also be ‘universal’ communication media like video, imagery or numbers that are associated with the text that they can understand.
Media Content: There are a few sources for freely-licensed imagery that we can use for #Edit 2015: still imagery, video imagery, Wikimedia project pages, audio, and imagery we make ourselves. I’d love if we could somehow have more audio/video content for #Edit2015. I looked for freely-licensed video and .gifs on Wikimedia Commons, Vimeo, Internet Archive and YouTube, and I know there are many more I could have used. The first few versions of #Edit2014 incorporated more video than the final cut did, but much was cut out because it was too busy or complicated to communicate an idea quickly. Sometimes a still frame of a Wikipedia article or a still photo might communicate the idea more neutrally or succinctly than portions of freely-licensed videos could.
For every still image you see in #Edit2014, there’s probably 10 more that didn’t make the final cut. It took a lot of research to find appropriate and compelling imagery.
I’m very optimistic that this will be a fruitful initiative, and I can’t wait to see all the usernames of everyone who contributes. Please share this link with your friends. Let’s collaborate and tell the story of Wikipedia and 2015 together.
Victor GrigasWikimedia Foundation Storyteller and Video Producer