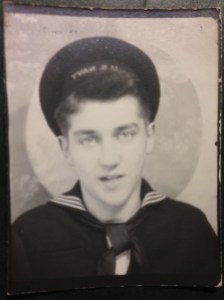 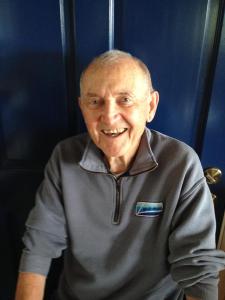 George Pendergast survived a kamikaze attack in the Second World War. Today, he edits Wikipedia. Both photos—from 1943 and earlier this year, respectively—are courtesy of George Pendergast.
Over seventy years ago, the US destroyer Mahan was patrolling off Ponson Island in the Philippines when eleven Japanese kamikaze aircraft appeared over the horizon and attacked. The bombers in the group bored in with bombs armed. US Army fighter aircraft shot down three and damaged two; Mahan‍ ’s gunners took out another four.

Mahan in June 1944, shortly after a refit in California. Photo from the US National Archives and Records Administration, public domain.

George Pendergast, who edits Wikipedia with the username Pendright, was eighteen years old when he joined Mahan‍ ’s crew in April 1944. About half of the ship’s crew at that time was made up of green, untested teenagers. Pendergast served aboard the ship as a fireman, second class, a low-end position that “required little brainpower but much speed and dexterity.”
He would function as one of a three-part crew: one each for oil, air, and water. These individuals had to work very closely together when hunting a submarine, a process that required the destroyer to run quickly at varying speeds. “Through a system of communication, the bridge would send down an order for ‘full steam ahead’,” he said. “That meant the fireman had to bat open twelve burners, feeding oil into the firebox, as quickly as possible; the man on the air had to feed the air simultaneously for proper combustion; and the water checker had to feed more water into the boiler, or it might go dry and blow. Now, five minutes later, the next order might be ‘stop’, which meant all twelve burners had to be batted closed, the air guy had to cut the air, and the water checker had to cut the water, so it would not overflow and kill the fire.” The steam produced through this process would be fed to the engine room, which controlled the propellers that actually moved the ship.
Pendergast’s position kept him in the often unbearable heat of the fireroom, blind to the world outside. Pendergast would stand watches of four hours on and eight or twelve off. If he was off watch between 8am and 4pm, however, he would have to report to the fireroom regardless. “You might chip paint, do some painting, clean burners and floor plates, or do other menial tasks,” he said. “The Navy made sure you kept busy—no days off!” Still, when the sailors were off duty, there was little more to do besides sleep, eat, read, and write home. Many men took to gambling their salaries, a problem so pervasive that the navy limited salary dispersal while underway to just five dollars every two weeks—the sailors were paid in cash.


If the ship was in battle, the stress level changed. Being below Mahan‍ ’s deck, Pendergast had little clue as to what was going on outside. They were forced to use the tempo and weight of the ship’s armament to compensate. “The guns told you what was happening,” he told me. “If you heard the five-inch guns booming away, the enemy was still at a distance. When the 40-mm anti-aircraft guns started blasting away, they were getting closer. When you’d hear the 20-mm guns, you knew it was time to worry.”
On 7 December 1944, those 20-mm guns were used extensively. Mahan was not a large ship, displacing only 1500 to 1800 long tons. Furthermore, it was primarily intended for surface and anti-submarine warfare, and as such was not heavily armed with anti-aircraft weapons—by 1944, wartime refits brought the major weaponry to four 5-inch, two twin 40-mm, and four to six 20-mm guns.
Exactly three years after the attack on Pearl Harbor, the battle that brought the US into the Second World War, Mahan faced down the eleven Japanese aircraft off Ponson Island. Despite its crew’s best efforts, the ship was hit by three Japanese kamikaze aircraft. The kinetic impact of these strikes was augmented by the fuel they were carrying. One struck the superstructure, where the bridge—staffed by the captain and crewmen at the helm—was located.

After receiving the order to abandon ship, Pendergast and his crewmates climbed up to emerge into a world that had changed greatly since they last saw it:

Pendergast went on to serve in the much quieter Caribbean and European theaters aboard Cone from 18 August 1945 until 21 March 1946. He later got a degree and became a government accountant and auditor.
In his mid-80s, Pendergast got involved with Wikipedia after a local military museum asked him to write about women in the military. Accordingly, his first edits on the site were to Cadet Nurse Corps in October 2011. He was motivated by the idea of contributing to something with a lasting sense of value and by bringing his shipmates’ war history up to the “level they rightfully earned.”
In the years since, he’s turned 90 and written featured articles on Mahan and the Mahan-class destroyer, which examines the eighteen identical warships that Mahan led. The class article was featured on Wikipedia’s main page on 16 January 2015 and was visited approximately 48,000 times in a four-day period. He has had a very positive experience on the site, and plans to keep contributing for as long as he is able to.
I asked Pendergast whether the current generation of US history enthusiasts—people who have had little direct experience with conscription, let alone war—is missing crucial life experiences that derogatorily affect their views and writing. He does not think so. “There have been many successful coaches in sports—yet some of them never played the game or ever played it very well. Historians are another example.”
For older individuals who want to contribute, Pendergast advises that they should make use of Wikipedia’s mentoring processes, such as the Teahouse, the adopt-a-user program, or the upcoming co-op, and choose a subject that they are both passionate about and knowledgeable in. He also noted that studying articles near their preferred topic would help them learn the intricacies of wiki markup, and that they should join Wikipedia groups and activities when offered. Finally and most importantly, “be bold, but don’t bite off more than [you can] chew.”
Near the end of our correspondence, I backtracked to ask Pendergast about his most vivid memory from that day.

Ed Erhart, Editorial Associate
Wikimedia Foundation
This blog post was originally published in the Signpost, a news journal about the English Wikipedia and the Wikimedia community. It was slightly edited and updated for publication on the Wikimedia blog. 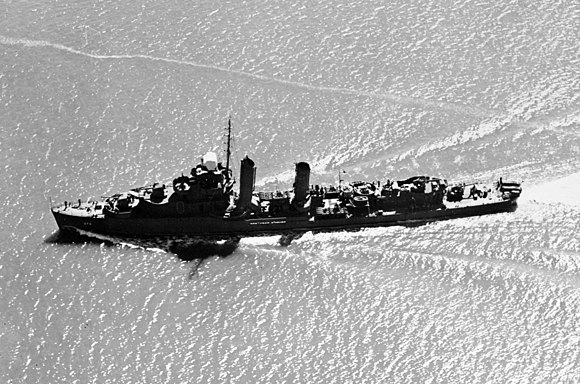