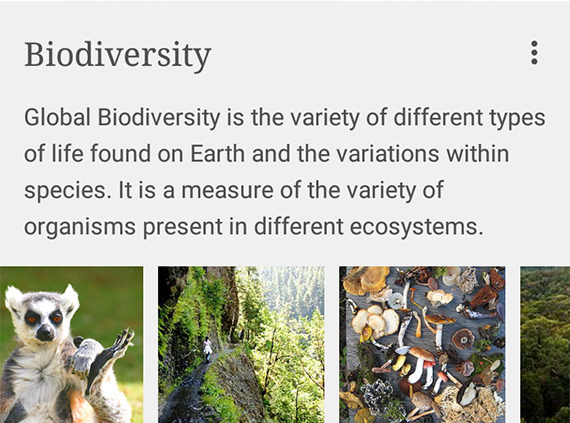 Have you ever gotten lost on Wikipedia? You know the feeling: you start with one topic, then you start clicking links. Eventually, you’re reading about apricots, which lead you to William Shakespeare, and suddenly you can’t remember where you started (hint: it might be toothpaste). This network effect happens thanks to the vast amount of knowledge on Wikipedia, all connected by links. It can be incredibly fun, but what if you want to return to where you started?
A new update to the official Wikipedia app for Android helps readers easily explore topics linked in an article without leaving the original page. Now, you can view previews of linked Wikipedia articles simply by tapping a link. A window will appear featuring the first few sentences of the article and an image gallery, so you can quickly get the gist of the topic. If you want to explore further, you can easily continue to the article you’re previewing. Otherwise, just tap the ‘Back’ button on your Android device, or slide the window away to return to the original article.

The preview window also provides options for saving the article for offline reading and sharing the article on your favorite social networks.
Tapping one of the image thumbnails will take you to a full-screen image gallery where you can swipe between all the images from the article.
User testing of our app has shown as much as a 30% increase in engagement as measured by number of links tapped with this new feature. While currently available only on the Android app, the Foundation plans to release it on the iOS app in the future and is exploring mobile web options.
The “article preview” concept has been in development and testing at the Wikimedia Foundation for quite a while: a similar feature, known as “hovercards,” has been available as a beta feature on desktop for logged-in users since early 2014, and another feature called “navigation popups” has been around even longer.

Other recent updates on the Wikipedia app for Android include improved tabbed browsing and language switching. You can now press and hold links to reveal a menu that lets you open the link in a new tab, in addition to saving the linked article for later reading offline, and sharing the link with other apps. Press the ‘Tabs’ button near the top-right of the toolbar to see the tabs that are currently open.
If you are a multilingual reader and would like to search for articles in different languages, we’ve added a convenient button for switching your current search language. Simply tap ‘Search Wikipedia’ in the toolbar, and notice the language button on the right.
So, go nuts! When reading your next article in the app, tap on as many links as you like, open as many tabs as you want, switch languages, and feel confident that you won’t lose your place—all while getting the information you need to know.
Dmitry Brant
Software Engineer / Product Owner
Wikimedia Foundation
All screenshots by Dmitry Brant, freely licensed under CC BY-SA 4.0.