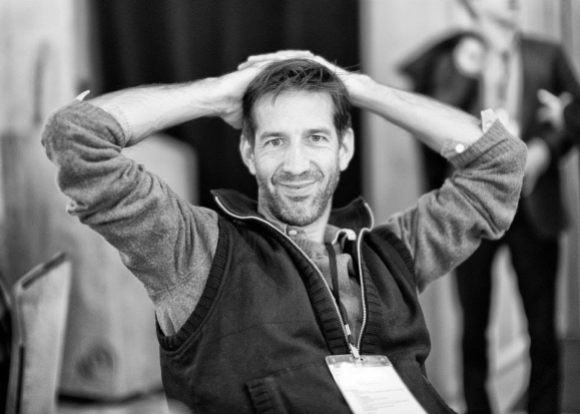 Antoine Bello is a well-known French author; his donation is the first time an author has donated an entire year’s royalties to the Wikimedia Foundation. Photo from Christopher Michel, freely licensed under CC BY-SA 3.0.

In Antoine Bello’s 2009 French-language novel Les Éclaireurs, a secret agent from Iceland named Sliv Dartunghuver works for a global organization that is planting fake stories in newspapers, infiltrating the United Nations, and helping support a terrorist organization based in the Middle East.
Praised by French reviewers—Le Monde said the book had “vitality” and “imagination”—the novel was also noteworthy for its unique dedication to Wikipedia. Bello says that the encyclopedia deserved his highest praise because he relied on it to understand real-life doings that form the backdrop to Les Éclaireurs.
This month, Bello took his praise of Wikipedia one step farther: he donated all of his literary earnings from the previous year to Wikipedia. Bello’s gift of $50,000 to the Wikimedia Foundation is the first time in Wikipedia’s history that an author has given us a year’s royalties.
Bello says he is only returning the favor—that Wikipedia astonishes him whenever he looks for information there.
“Every time I use it, I think of the people who have taken the time and devoted long evenings doing that,” Bello says of Wikipedia’s articles. “And I wonder, ‘Who are these people? Why did they do it? What an appetite for knowledge and for sharing it they must have.’  And I feel blessed that people do that.”
Bello, who was born and raised in France and now lives in New York state, has been writing fiction for 20 years. Les Éclaireurs, which translates into English as The Pathfinders, is part of a trilogy of novels that helped burnish Bello’s literary reputation. The trilogy’s last book, Les Producteurs, was published in 2015, and Bello once again used Wikipedia to flesh out historical facts that anchor the novel’s passages. In fact, using Wikipedia changed Bello’s perspective about a subject that Les Producteurs addresses as a subplot: epidemics around the world. Wikipedia documents the full history of infectious diseases, including those in China that killed tens of millions of people during the Middle Ages.
“I was thinking, obviously, about Ebola and AIDS and the Great Plague in Europe in the 14th century, but then you go to Wikipedia, and you see a number of pages about hundreds of other epidemics,” Bello says. “Suddenly, the world looks different. It’s no longer only about Europe and the United States. It’s no longer only about the past 20 years. It’s no longer about Christianity. Suddenly, you realize the world is much, much bigger than you thought. And at the same time, it’s all at your fingertips, thanks to Wikipedia.”
Authors around the world use Wikipedia for research, and many have publicly thanked Wikipedia for its depth of knowledge. In 2013, for example, Seattle writer Aubry Kae Andersen acknowledged Wikipedia in the dedication of her debut novel, Isaac the Fortunate: The Winter. And in 2012, the author Jasha M. Levi praised Wikipedia in the acknowledgements of his nonfiction work, Requiem for a Country: A History Lesson, which describes the 20th-century dissolution of Sephardic life in Bosnia. “Without access to its information,” Levi wrote of Wikipedia, “it would not have been possible for me to make clear to my readers many little-known facts of Yugoslav, European, and World War II history.” 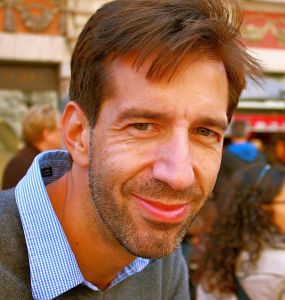 Best-selling romance novelist Nora Roberts, through her Nora Roberts Foundation, has donated to the Wikimedia Foundation. And on social media sites in the past few years, authors have acknowledged their financial contributions to the Wikimedia Foundation with such shout-outs as, “I just donated to #Wikipedia,” hoping that their tweet and hashtag inspire other people to make a similar donation. Bello hopes that his new donation motivates other people—especially other authors—to give back to an online resource whose entire budget is funded by contributions.
Bello says it’s “mind-boggling” that the non-profit Wikimedia Foundation can operate Wikipedia with a staff of 240 and a budget that pales to those of other top websites. “I’d like to draw everyone’s attention to it, because I think people are benefiting from this miracle, and they don’t realize it’s a miracle,” Bello says. “Nobody’s getting paid for it. There’s no advertising. You’re not harvesting my data. And it’s very up to date. I follow tennis, for instance, and when Roger Federer wins a match, five seconds later, it’s in his page. With this donation, and whenever I can, I try to evangelize and tell people how great it is.”
As someone who has lived in different countries, including Japan, and considers himself “a citizen of the world,” Bello says he appreciates Wikipedia’s depth and breadth. The encyclopedia is in more than 250 languages. About 70,000 active volunteer editors, and thousands of other volunteer contributors, ensure that Wikipedia’s 36 million articles stay current for the site’s 400 million readers.
“I obviously share a lot of the values of the Wikimedia Foundation – the plurality of languages, the tolerance, the openness, universal access to language,” says Bello. “Those are all subjects that are very dear to my heart.”
Bello now writes a new book almost every year. When he’s in the middle of researching one, “I can literally spend hours on Wikipedia, jumping from one subject to the next,” he says. “I will want to write on, say, the recent economic depression, and I will start on one article and then I will see a link to another aspect, like the sub-prime (mortgage crisis), and then inside the sub-prime, I will see something that will catch my eye. And then after a few hours, I’ve noticed that I’ve bookmarked 25 pages. And that I have the substance for 1-2-3 chapters of my book. Of course, then there’s the job of the novelist in making sense of all of that – providing a vision of the world, the unique prism of the artist and the writer. But the material, the raw material, is all there in Wikipedia. And I love it. And I feel so grateful.”
The Wikimedia Foundation is very grateful to Antoine Bello for his spirit of giving. In the world of letters, writers start with a blank page. It takes inspiration to fill the page with meaning. It take inspiration to donate to Wikipedia in an entirely new way.
Jonathan Curiel
Development Communications Manager
Wikimedia Foundation
An earlier version of this post misattributed the lead photo. We regret the error.